Trieste and the Castello di Miramare by Imogen Robertson So Ned and I went to Trieste in north-eastern Italy for a week in June, partly because of Jan Morris and partly because we were celebrating a bit of history of our own, our fifth wedding anniversary. For those of you who haven’t visited Trieste, I really recommend it. Set on a thin strip of coast between the Adriatic and Slovenia, it’s friendly, the food is great and there are castles, museums and narrow twisting streets a plenty, as well as grand 19th century squares and very few tourists. We had the Civico Museo di Storia ed Arte to ourselves, seeing the sort of superb Greek vases that normally mean shuffling slowly through the British Museum on a timed entry ticket, in rooms so empty the lights occasionally went off when we’d been staring at one thing too long.


I also stared at this quite a lot too. 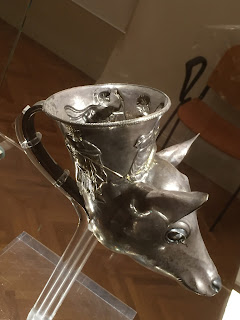 At the back of the museum is a sculpture garden, or rather a rough meadow surrounded and punctured by remnants of city and castle walls in which a lot of sculpture has ended up. It is now one of of my favourite places in the world. 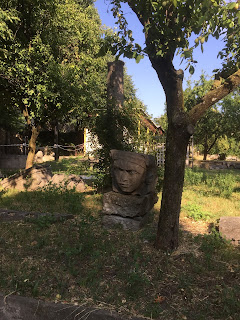 I tend to be a bit snotty about mid-nineteenth century architecture. I’m one of those people who wander around complaining about the rather overly enthusiastic ‘restoration’ of some many English churches and cathedrals. That said, I beginning to learn the error of my ways and Castello di Miramare, five miles along the coast from Trieste was certainly a lesson I enjoyed learning. Building began in the 1850s on this bone white, modest fairy-tale castle on a promontory jutting forth into the bay and it was finished in 1864. The man who owned it and who was closely involved in its design was Ferdinand Maximilian, brother of Francis Joseph I, the Emperor of Austria. He was also deeply involved in the laying out and planting of the stunning gardens, a mix of exotic, forested and formal, which surround the castle and wash back up the slopes behind it. Inside the castle is somewhat eccentric. There is a throne room of course, But also an upstairs fountain, rooms full of portraits of princes and emperors contemporary with Maximilian, and his bedroom is designed to look exactly like a ship’s cabin. 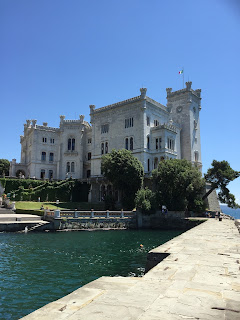 Poor Maximilian had an unhappy end. He was a successful naval commander, but before his castle was completely finished he was persuaded to become Emperor of Mexico. It happens. It wasn’t a long or happy rule and he was executed on 19 June 1867. I’d heard his story before, and Ned retold the version he knows from Terrifying True Tales of History, full of portents and paranoia with sepulchral glee as we wandered around, but I felt a great deal more sympathy for him having seen his home. The private rooms are tasteful, human sized and full of light and colour looking out across the Bay of Trieste. He also had an excellent library.

By the way, I have a new website at www.imogenrobertson.com
Do let me know what you think.

Fascinating piece. Now I have to go to Trieste. And loved the story of Maximilian. Love the sparkling new website! Very impressed!

Thank you! It really is a lovely city - and glad you like the website. Designer did a fantastic job.