Welcome to our birthday party! by Mary Hoffman

The History Girls blog is 6 years old today and we hope you will want to join us in celebrating at our party. It has a special theme as all July we are having a Jane Austen month.

18th July sees the 200th anniversary of Jane Austen's death and the image above remains one of the few we can be sure is of her, drawn by her only sister. (She had six brothers).

Before we start the party, it might be good to remember some highlights of the last six years. Of the 28 HGs who started out in 2011, these are the stalwarts who are left:

Of the rest, some have come and gone during that time and are much missed, including Harriet Castor, Linda Buckley-Archer, Louise Berridge, Manda Scott, Tanya Landman, Clare Mulley - oh too many to name.

Those who have left often return as guests or stay on as Reserves.

There are long periods of stability but then suddenly we might get 3 or 5 resignations close together, always for reasons of overwork or over-commitment. If you want to know the current list, do go to our About Us page.

Those who have been guests often become full-time History Girls! 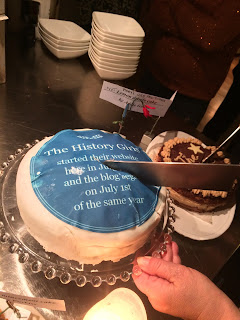 Sometimes we have parties IRL to acknowledge what fun it has been and how long we've been going.

On 18th the History Girls will be having a full JA celebration here but since we are also making much of six years of writing posts for your delectation, we thought we might invite Jane and some of her characters along today.

We wondered who would be most fun at a party and I came up with: 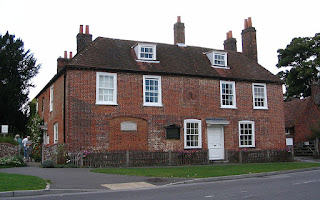 Let's have the party at Chawton. It's a bit small for us all to crowd in but this first of July date is sunny and warm in Austenland, so we can spill out into the garden.

Have you visited there? You'll know the rooms are quite square. Jane, Cassandra and their mother moved there in 1809 and the mature novels were written there. I think we can lay out our banquet there quite easily. Though it's going to be difficult for me - a gluten free vegetarian - to find much to eat here.

This is our menu:

To drink? Mr Weston's good wine, of course! And some sweet Muscat from Mrs Jennings.

And if none of the fare above appeals, do feel free to bring your own.

We must have some music, of course. We are spared being delighted by Mary Bennet because we meanly didn't invite her, but who else can play? Oh Frank Churchill seems to have sneaked Jane Fairfax in and she is a far superior player.

I think we'd better have some dancing. Try this Napoleonic Cotillon and Reel

Or if you fancy something less sedate, this Sir Roger de Coverley

Oh dear, we have some gate-crashers!

I had already spied Mr Woodhouse in the corner (for Emma wouldn't come without him) supping some gruel and toying with a soft-boiled egg, but he's harmless enough, only concerned that you should all be wearing enough shawls. Though it's a fine day, remember.

No, but word has got round about the party and Lady Catherine de Burgh has rapped imperiously at the door, accompanied by her toady, Mr Collins.

Shall we let them in?

Let us know in the Comments below who exactly you think it would be nice to see here and who can be ever so politely refused entry.

I'm going to see how many ex-HGs and guests I can get to come and join us.

Many happy returns! PS I'm a history boy, welcome to the future! :-)

Brilliant Party. Sorry I couldn't make it but I was entangled with Mrs. Dalloway and Virginia listening to an excellent reading by Annette Benning on Audio Cassettes. I think Jane might have approved though she likely had some disagreement with Virginias life choices. In any case a most hearty congratulations to the History Girls and may you sail through the next six years happily.

Congratulations, History Girls! Bags I meet Jane herself, especially as we're related through the Leigh family! I was at Chawton about a year ago. Sadly we were too late to visit the house but I had a high old time in the shop buying late 19th century editions of Emma and Northanger Abbey.


Congratulations History Girls, what a great six years!
Can't Mary be invited too, if we keep the piano lid firmly down, and surely Fitzwilliam has to be invited - dancing to no?
I would certainly love to join you, and am prepared to don a bonnet if muddy-hems alone will not suffice.
Congratulations again Mary and all!
love, Clare xxxx

What a wonderful group of women to be a included amongst. I am honoured to have been with "US" for two years or so. Happy Birthday, History Girls. Many Hoffman, you are a shining light xx

Congratulations - and best wishes for many more years of fascinating pieces!

I want Mr Knightley and Henry and Catherine Tilley, please! And Miss Bates to make sure the party doesn't fall silent. I think Mary Bennet was much more interesting than Austen would admit (she didn't like bluestockings). But let's keep Mr Bennet away. Nasty sarcastic man. We could also have Robert Martin; a very sensible man. It'd be interesting to talk to him about farming in the early 19th century.

Congratulations on your 6th birthday - it's a real achievement to continue to produce an interesting read for every day of the year. Inspired by many of the HG posts, I've read follow-up articles, taken out a variety of books from the library & checked out previously unknown authors - Thank you.

Elinor Dashwood, so I expect we'll have to have the rather solemn Edward along.
The wonderful and devoted Colonel Brandon, especially if he is in disguise as the late Alan Rickman. I suppose Marianne could come too as long as she doesn't cry.

I'll make a couple of the dishes - I can already make some of them and I need to bring food as an apology. My post isn't about Austen solely because I had an Austen post so recently - I was hoping the clothes in my post would make up for my perfidy. Speaking of perfidy, I do not want to meet Mr Collins. I know, it's so wrong of me.