Bretton Hall and the Yorkshire Sculpture Park by Penny Dolan


Near Wakefield lies the Bretton Hall estate, with its landscaped gardens, lawns and lakes. The grounds hold a changing collection of work by contemporary British and international sculptors: this is the Yorkshire Sculpture Park, often known as the YSP.

The place has a history: the house, Bretton Hall was a family home until the twentieth century. The state was inherited, in 1407, by the Wentworth family; during the sixteenth century, it was improved by a fine wood-panelled suite, complete with bedroom furnishings and hangings, created to welcome Henry VIII to the Hall. Although the monarch only spent three nights within the chamber, when Bretton Hall was rebuilt in 1720, the “royal” panelling was installed in the new Palladian mansion and remained there for over two hundred years. 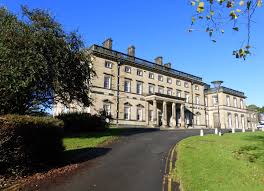 Then, in 1947, Bretton Hall and its estate were bought by the West Riding Council: the treasured panels were given to Leeds City Council and are now, suitably, at Temple Newsam, an impressive Tudor mansion on the edge of the city of Leeds.

That half-decade gave Bretton Hall a new identity: in 1949, Sir Alec Clegg, the Chief Education Officer for the West Riding of Yorkshire, founded a Teacher Training College there, to supply the need for additional teachers. The need was great, not just because of war casualties or baby boom but because various pre-war educational proposals, such as the now familiar primary & secondary school structure, were at last happening.

A new educational philosophy was in the air, too:
“There are two kinds of education: the education of the mind by imparting facts and teaching skills, and the education of the spirit ... the child's loves and hates, his hopes and fears, or in other terms, his courage, his integrity, his compassion and other great human qualities" - Sir Alec Clegg

Through the thirties, there had been a growing conviction the arts were of value to all the population, including the working classes. Alec Clegg was a great friend of Herbert Read who had, in 1943, published Education Through Art, his “manifesto for much-needed educational reforms” which led on to the belief that the arts should have a place in the school curriculum.

Clegg – and this philosophy - shaped Bretton Hall College. Over the decades, the institution grew and flourished, specialising in innovative teaching of design, music and visual and performance arts. The large estate offered space for the studios and ceramic facilities and workshops and theatre spaces that students needed.

Dotted around the park, where the River Dearne flowed through two artificial lakes, were several original 18C follies and ornamental structures. These, in their way, may have led to the park's new purpose: inspired by the Art’s Council’s open-air exhibitions in London, in 1977, the Yorkshire Sculpture Park was established there, as a northern setting for contemporary large-scale sculptures and art works. 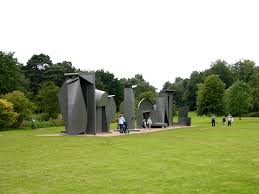 Over time, Bretton Hall College, in its rather remote location, began to struggle. Changes during the eighties and nineties – educational, political and cultural - brought financial and other problems. Early in the new century, the remaining courses had been brought within the University of Leeds own School of Performance and Cultural Studies and in 2007, Bretton Hall College was finally closed.

Meanwhile, English Heritage had studied the Hall and its historic landscape. They found Bretton fragmented by accommodation blocks, studios, offices, outbuildings, car parks and by use as a countryside park and its upkeep much neglected. English Heritage declared the Grade 2 listed Bretton Hall and its grounds at risk and Something had to be Done.

In 2009, Wakefield Council took over the site, promote the Yorkshire Sculpture Park as one of the region’s main visitor attractions. Bretton Hall was sold to a development company, who demolished some of the old and unwanted buildings and converted the Hall into a modern up-market hotel. The YPS already had a large administration, gallery and leisure space but a new Visitor Centre was planned and is due to open soon. 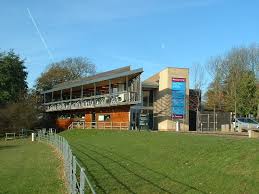 Older areas of the park, such as the Bothy and the walled Garden are still used for ever-changing exhibitions. The old Deer Shelter now encloses the Skyspace, where the changing sky can be seen through a square frame: this often appears as an ident on BBC Four. 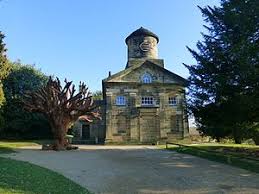 Progress continues: the eighteenth century chapel of St Bartholomew, built by Sir Willliam Wentworth and de-consecrated in the 1970’s, was renovated in 2014. The white interior is currently filled by a most atmospheric, three-dimensional thread installation by the artist Chiharu Shiota.

The YPS was not intended as a permanent collection: the exhibits and installations change. The YPS has housed work by Barbara Hepworth, Anthony Gormley, Ai Weiwei, Grayson Perry and many contemporary British and international artists. Residencies have explored the architectural, historical or natural aspects of the Bretton Hall site.

Yet one artist remains a constant presence: Henry Moore, who grew up in the mining community of nearby Castleford. His massive, curving figures rest well upon the rolling West Bretton landscape, with the wide sky and wind-blown clouds above. 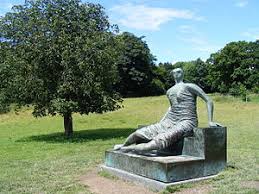 However, though much at the YPS is beautiful or impressive, this forty-year-old gallery still faces problems. How will Wakefield Council, with cash-strapped funding, and other bodies afford the staffing and maintaining of the YPS  grounds?  Or manage new exhibitions and installations? Or run its education programme for schoolchildren and students?

At this moment in history, the wider view of art for the people and by the people - as well as for the children and by the children - seems under threat: cuts to orchestras and music services, cuts to local museums and galleries, theatre and arts companies, curtailment of out-of-school visits, changes in student grants and in the provision of wider post sixteen and adult education.

Sir Alec Clegg’s belief that art - and the arts – should be central to education is disappearing under the onslaught of testing, curriculum changes, funding pressures, and the in-school training of teachers and a hard and harsh political climate.

Why have I put this post here on History Girls? Because the Yorkshire Sculpture Park – while it lasts – seems to me to be a monument to a vision of Arts Education that is passing away into history.

ps. Yet, for now, the YPS is still there, just off the M1, and worth a visit. People are free. but there's a charge for car parking.

Sir Alec Clegg - a hero. And may the Yorkshire Sculpture Park prosper forever - an inspiration and a delight! Thanks for this, Penny!

I posted a picture of an oak at the YSP today... It's one of favourite places (along with the Hepworth Wakefield).
Great post, thank you :)

Thanks for your comments, Joan and Clare

I agree they're both favourite places, Clare, but I couldn't stretch the post (or the visiting time) to include the Hepworth and the Sculpture Triangle concept without any readers dozing off. Maybe another day.

The real trees and mature woodlands there can look wonderful. There's a huge iron tree by the chapel too, made by Ai Wei Wei, and we saw another odd, constructed tree being installed as part of an exhibition for the summer. (I may need to go back again quite soon.)

Thanks very much for this interesting post. One of my favourite places! I studied for my Theatre MA there. Reading your post brought back lots of lovely memories, walks around the lakes, meadows full of poppies and of course the wonderful sculpture. I was so lucky to spend time there. I've taken my family there several times since xxxx

Excellent post, Penny - must go there one of these days. It sounds great, and I do SO agree with the ethos!