A holiday in Occupied France

In April I had the good fortune to spend nine days in the south-west of France, in a little town called Castillon-la-Bataille, and in Bordeaux. I needed to scope out scenes for the new book and working out how SOE agents and the Resistance could get around during the day and night unseen to do their sabotage. The town, then called Castillon sur Dordogne, was in Occupied France (the Dordogne was the border). 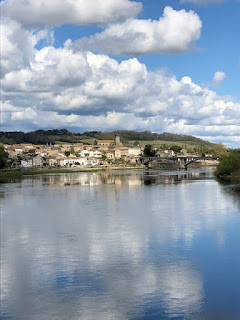 I stayed with the delightful Janie and Mickey at Chez Castillon, a four-story town house in a side street near the market square.

I knew I'd made the right decision to go there when Janie told me that in WW2 the house had been used as a hospital for German officers. Right, I thought, it's going in the book!! The Germans didn't have the lovely swimming pool, though... 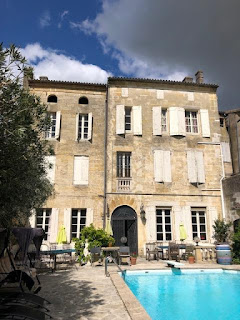 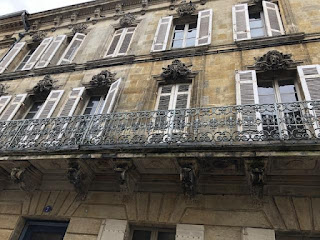 In the Second World War, Castillon-la-Bataille was called Castillon-sur-Dordogne, as it lies on the lovely Dordogne river.  The name changed on November 27, 1953 to commemorate the Battle of Castillon in 1453, in which the English forces were defeated. It was the last battle of the Hundred Years War. 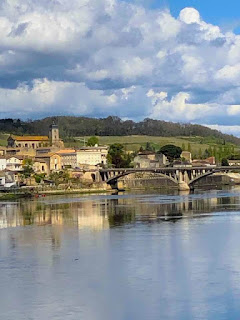 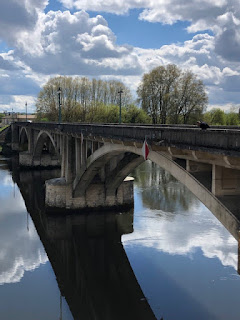 In WW2 the town was on the frontier between Occupied France and Vichy France and there was a checkpoint on the bridge over the Dordogne.  It's now such a pretty bridge, as you can see, but it’s not the bridge that stood there in 1943. That bridge was blown up and it will suffer the same fate in my book.


The demarcation line between Occupied France and Vichy France was very idiosyncratic, especially around Castillon. For a distance it followed the Lidoire river, which flows into the Dordogne near Castillon, then it went along the Dordogne for a short distance, before turning south to Sauveterre-de-Guyenne. 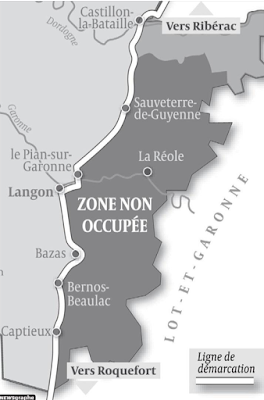 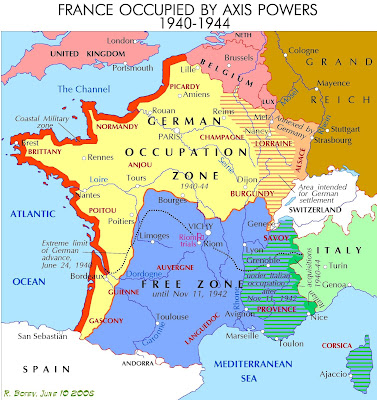 Under the Franco-German Armistice Convention France was divided up on 25 June 1940 into two main zones on either side of an arbitrary line that cut across départements, municipalities, fields and woods. The position of the line changed according to German whims and requirements.

The German-occupied northern zone covered just over half the country. In the south was a "free zone" with the town of Vichy as its “capital” and a puppet government. The Germans kept the entire Atlantic coast along with the main industrial regions. A whole series of measures that severely restricted movement of people, goods and postal traffic between the two zones was enacted. The Germans put pressure on Vichy France at will by “opening” or “closing” the line when they wanted. Thus they kept a stranglehold on France and its economy.

For a while not even letters could pass between the zones. It wasn't until September 1940, that the “interzone card”, or “family card”, could be exchanged by families or friends. It  bore a series of pre-printed formulae and only allowed correspondents to provide very brief and impersonal news. Not a single word could be added to it. 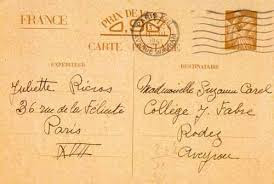 At almost 1,200km, the demarcation line was too long even for the Germans to guard entirely. Sentry boxes and barriers were set up at crossing points and there were regular patrols along the border. There was a similar system on the Vichy side, although it was a good deal patchier owing to lack of men and resources. 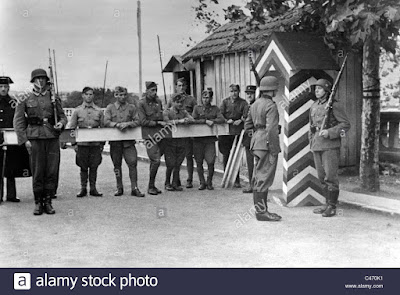 The demarcation line could only be crossed at official crossing points and upon presentation of an identity card and an Ausweis (pass) provided by the Kommandanturen (Offices of the German authorities, responsible for military and civil administration of a given area). 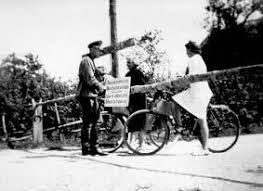 The Ausweis was only granted if the application was accompanied by a full set of documents including identity photographs, certificate of nationality and reason for crossing, and it was given only in accepted cases of urgent need (births, burials or serious illnesses of close relations). All those wishing to cross were faced with an endless series of procedures and interminable waiting periods. 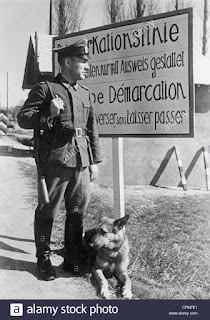 Anyone living within 10km of either side of the demarcation line could request an “Ausweis für den kleinen Grenzverkehr” (pass for local cross-border travel) allowing them to move across, but only for a set period of time.

The Germans took over the richest agricultural and industrial regions: the occupied zone produced 72.5% of wheat, 78% of barley, 80% of oats, 70% of potatoes, 87% of butter, 95% of steel and 76% of coal. With raw materials “confiscated” to supply the German economy,Vichy France's industrial and agricultural sectors severely disabled if not completely paralysed. The situation became particularly difficult in areas bordering the line, with companies cut off from their workforces and farmers from their fields. Difficulties in obtaining provisions led to major food shortages, even the serious risk of starvation. 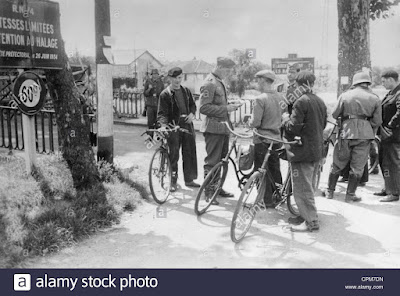 Unsurprisingly, smuggling became rife. on foot, by bicycle, by rowing boat, in carts full of manure, in barrels – all possible methods were employed to smuggle black market goods. Also people. From a few smugglers acting on their own initiative, came entire networks smuggling escaped English and French prisoners of war, Alsatians and Lorrainians who refused to enlist in the German army, volunteers eager to serve Free France, and anyone else who felt threatened.

Here is an account of one such incident, when Gilbert Renault (one of the most famous French agents in France, also known as Colonel Remy, Raymond , Jean-Luc , Morin , Watteau, Roulier , Beauce and Remy) was smuggled across the demarcation line near Castillon:

“Everything is ready ... I saw the doctor, we are expected tonight at his place for dinner. Here's the plan: we go by bicycle with the drôle (a south west France expression for a young boy). We stop right next to the line, the French side. About five hundred meters away is the German position. I leave you with Pierrot and the drôle. I continue cycling and will go past the German patrols using my border permit. Pierrot and the drôle will take you through a large meadow along the sunken road on the left. It is visible from the station but tonight, with rain, and no moon, it will be fine. You will reach the Lidoire; is a stream that flows into the Dordogne. They’ve not yet had a lot of rain, so you just have to take off your shoes and roll up your pants to the knees. This stream marks the boundary line between the occupied zone and the free zone. On the other side, immediately in front of you, there is a small meadow and a farm which is just down the road. They won’t betray you. Besides, I'll be waiting for you on the other side of the Lidoire. We will find the doctor’s car a little further on."
Those who lived through those years remember the fear, especially as the SS monitored the border until their departure to the Eastern Front.

"There were incessant controls in the vineyards, three or four times a day. But we managed to pass people across the line. My father put their spade on the shoulder so that they had the appearance of farm workers. Once in the vineyards of the free zone, they could run away, "said Joël Baudet (below)

Controls became stricter and more numerous from the spring of 1941, when Wehrmacht soldiers were replaced by customs officers. Patrols and controls became the order of the day, and it was no longer unusual for pursuits to continue and shots to be fired inside the free zone itself.

This is the account of an English woman who was trapped when the Germans invaded, and desperate to return to England. I like to think she tried to cross at my bridge: 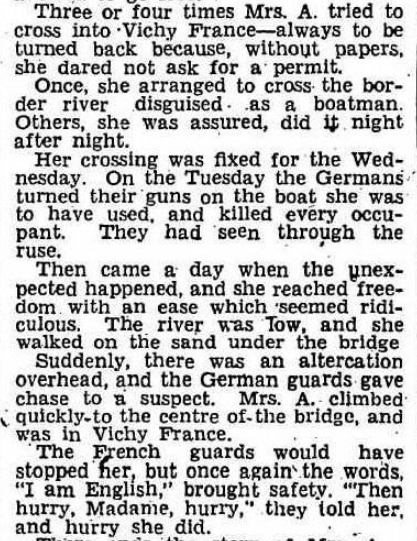 The Germans occupied the whole of  France on November 1942, and abolished the demarcation line in February 1943. A number of restrictions remained, however, in particular with regard to movement of goods, and conditions in the whole of France were grim until liberation in 1944.

Finally - My hosts, Janie and Mickey told me that it was on the balcony of this building that the collaborateurs horizontale (women who fraternised with Germans) were exhibited after their heads were shaved.
According to Janie, the women in Castillon were a lot luckier than those in a nearby village, where they were shot. 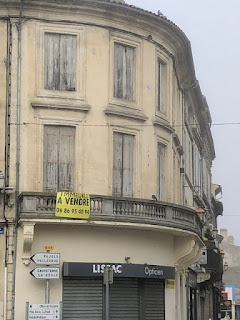 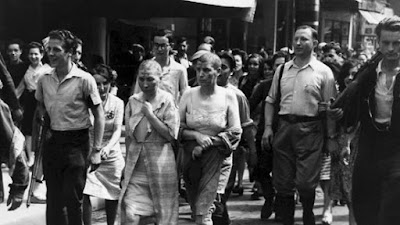