I have developed a couple of new obsessions since moving to Scotland six years ago, not all of which revolve around whisky. Moody looking castles are up there, as is the tooth-destroying confectionery known as Tablet, but the one currently leading the pack is hunting for marriage lintels.

A marriage lintel (also known as nuptial, marriage or lintel stone) is a carved inscription above the doorway of a house owned by a newly-married couple. They are a feature of the east coast of Scotland and date primarily from the sixteenth to the eighteenth centuries - the one pictured from 1610 is one of the best examples and commemorates the marriage of Nicol Moncrief, a servant of James VI. All feature the year of the wedding and the couple's initials and some also include pictorial details - there is a particularly lovely one on what is now known as the John Knox House on the Royal Mile in Edinburgh, commemorating the marriage of goldsmith John Mossman to Mariotta Arries.

The lintels serve as a record of a marriage and the joining together of two families, who were often aristocratic or monied. Lintels could be added to a building which was built specifically for the married couple, or were carved into a pre-existing lintel. They were always set over the main entrance and some also appear inside houses, above the most visible fireplace. Wherever they were placed, they were meant to be seen: perhaps we should think of them as an early form of social media - Mr and Mrs Smug-Married boasting about their updated status and their swanky new home.

There is, unfortunately, little information about the lintel stones beyond what they symbolise - or little I can find. There's no list of the surviving stones (although Wikipedia cites some examples if you want to go hunting) and, as you can see in the third photo, many have become detached from their original position. 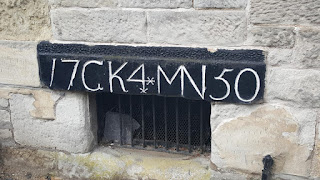 The custom of marriage lintels had died out by the end of the nineteenth century, as have some of the other traditional Scottish practices. Grooms are no longer expected to carry a creel (a large basket) filled with stones around the village until their bride releases them from their burden with a kiss. Brides might still find themselves standing to the groom's left but hopefully no one is still doing it because the
bride is the ‘warrior’s prize’ who the groom needs to hold with his left hand so he can fend off her family and other foes with his right. Similarly presenting swords from one family to the other as a sign of extended protection and acceptance isn't regarded as quite so crucial anymore.

Some customs do, however, continue. Although grooms aren't necessarily required to bring 'siller' (silver coins) to the ceremony anymore, a traditional wedding will still involve a scramble - throwing coins in the air for the children to collect. Wedding walks still take place, where the wedding party walk to the church preceded by a fiddler. Whether they have to turn around and start again if they meet a pig or a funeral as the rules once dictated is presumably a matter of choice these days, or very bad luck. Many couples still use a quaich, a two-handled 'loving cup' for the first toast to symbolise the joining of their lives. This tradition stems, as many of these practices do, from clan customs: the quaich was once used by two clans to celebrate a bond between them, with each leader sharing the whisky it contained. In a similar vein to sharing the quaich, some couples will still 'pin the tartan' - swapping rosettes to show that both husband and wife are accepted by the other's families. For anyone wanting to delve further, there are some excellent oral histories here, including blackening, the breaking of the bride-cake and betrothal customs.

Where Scots have broken with custom is the wedding date. Traditionally the most popular auspicious month to marry was June - this was partly because the goddess Juno (for whom June is named) was the protector of women, particularly in marriage and childbearing. On a more practical note, others chose June in order to time conception so that births wouldn’t interfere with harvest work. Last year, however, the most popular month in Scotland was September - no doubt because this is the one month of the year when the weather is at its most predictable. A Scottish June bride needs a dress that co-ordinates with wellies, an umbrella and, this year at least, a winter coat!

If you and yours are struggling to choose the right month for an upcoming ceremony, perhaps this poem might help. The message about May does seem rather clear...

Married when the year is new, he’ll be loving, kind and true.

When February birds do mate, you wed not dread your fate.

If you wed when March winds blow, joy and sorrow both you’ll know.

Marry in April when you can, joy for Maiden and for Man.

Marry in the month of May, and you’ll surely rue the day.

Those who in July do wed, must labour for their daily bread.

Whoever wed in August be, many a change is sure to see.

Marry in September’s shrine, your living will be rich and fine.

If in October you do marry, love will come but riches tarry.

If you wed in bleak November, only joys will come, remember.

Which ever you go with, have the happiest day and, in the words of this Scottish blessing: May your blessings outnumber the thistles that grow and may troubles avoid you wherever you go. Now let's see if you can still recite that when the bills come in...

Thanks for this, Catherine, I enjoyed it -- especially as my partner is Scots, from the Kingdom of Fife. He would probably scoff at most of the traditions here as 'tartanry' (just as he scoffs at the Scots words he neverthless uses to win at scrabble, while swearing they were invented by Walter Scott and never actually used by anyone.)
But he's often told me how he and his schoolmates would tour all the local churches at weekends for what he calls 'the poor-out' (pour out) when the groom, best man and sometimes the brides' father would all throw loose change around. The boys would grab as much as they could and hurry on to the next church in hope of catching another wedding.
One way of redistributing wealth, I suppose.

Been away from Scotland a long, long time..., but I do remember Lees Macaroon Bars, Tunnocks Caramel Wafers.
And, as you mention, the tablet of stone.

Interesting!
The scramble and throwing small change is a tradition here in Somerset, too - I had never heard of it before we moved here, and I'm not sure how common it is, but certainly in the village I lived in it was done by all the local couples. Also the lychgate would be tied closed and the groom lifts the bride over it, when they leave the church.