Finding the Story from the Research by Helen Peters

Our June guest is Helen Peters. 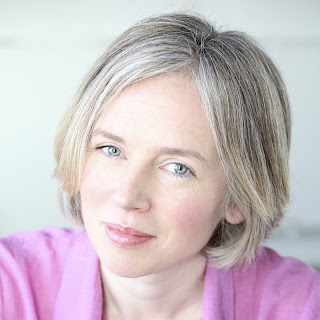 Helen Peters grew up on an old-fashioned farm in Sussex, surrounded by family, animals and mud. She spent most of her childhood reading stories and putting on plays in a tumbledown shed that she and her friends turned into a theatre. After university, she became an English and Drama teacher. Helen lives with her husband and children in London, and she can hardly believe that she now gets to call herself a writer.

Anna at War started in a different way from any of my previous books. I had just finished Evie’s Ghost, a timeslip story about a modern girl who goes to stay in an old house and finds herself taken back to 1814, when my editor asked if I would like to write another historical novel. So I found myself in the interesting and slightly daunting position of being able to choose any period of history, anywhere in the world.

While I was wondering what and when to write about, I started rereading Anne Frank’s diary, in preparation for teaching autobiographical writing to my Year 7 English class. I hadn’t read the book since I was a teenager, and I was astounded by it all over again. The vividness of Anne’s writing and her courage and resilience really struck me, and I began to think about writing a story about a girl’s experience in World War 2. 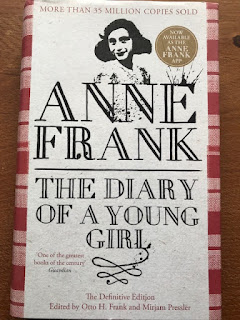 At around the same time, two women in their nineties separately contacted my husband, who is the head teacher of a boarding school in Brighton. They both wanted to thank the school that, eighty years ago, had taken them in as Jewish refugees from Nazi-occupied Europe. One of them remembered how her father, as he put her on the train, had cut off her plaits, thinking that if she could pass as a boy she might be safer on the journey. “I travelled all the way to England,” she said, “with my pigtails in my pockets.” The other talked about the ‘remarkable’ concern shown by the headmistress for ‘the terrorised young innocent girl who arrived in Brighton’. She wrote: ‘The British were so magnanimous to welcome us foreigners… truly showing a phenomenal humanity.’

This sentence really struck me, at a time when so much media coverage seems to dehumanise refugees. These stories cemented my desire to write about a girl who comes to England as a refugee from Nazi Germany. But I was very anxious about doing this. What right did I have, as a non-Jewish Englishwoman who has never experienced persecution, to write about the horrors of being a Jewish child in Nazi Germany?

The obvious solution seemed to be to write the story from the point of view of an English girl who befriends a refugee girl at her boarding school. This was the idea I had in mind when I began to research the Kindertransport, the coordinated rescue effort that brought ten thousand unaccompanied children from Nazi-occupied Europe to England between December 1938 and August 1939. 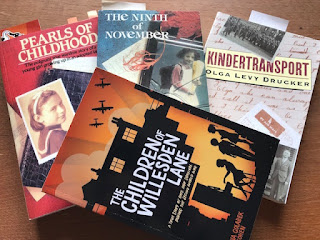 I knew very little about the Kindertransport before I began my research, so I started by watching documentaries and reading introductions to the subject. Once I had an overview, I started devouring autobiographies and memoirs of Kindertransportees.

I started to write the story from Molly’s point of view but, after writing a few terrible scenes, I realised two things. Firstly, every time I tried to set a scene in a 1930s boarding school, my writing instantly descended into cliché and my characters became appalling cartoonish stereotypes. My knowledge of pre-war boarding schools is entirely gleaned from Enid Blyton and Angela Brazil. If I were going to write about one, I would need to do a lot more research.

I didn’t do this research, because the second thing I discovered was that I was far more interested in Anna’s story than Molly’s. So I tentatively started to write some scenes from Anna’s point of view.

Many of the Kindertransportees vividly remembered their journey to England by train and boat, and many of their memories were very similar, so I began by writing about Anna’s journey, which was very closely based on these memories.

I was particularly taken by the recollections of Emmy Mogilensky, who was fifteen when she travelled to England. Emmy’s train was about to leave the station when a wicker basket was shoved into her compartment. She opened the basket to find twin babies inside. There were bottles and nappies in the basket, but no documentation, so the babies had obviously not been officially registered for the Kindertransport. Emmy looked after them on the journey and refused to allow them to be taken to an orphanage in Holland, thus unknowingly saving their lives. Mrs Mogilensky died in 2017, but luckily she gave a detailed interview to the United States Holocaust Memorial Museum Oral History Archive, which is freely available online. Her story was the main inspiration for Anna’s journey.

Many children also had vivid memories of the horrors of Kristallnacht, when their houses and flats were smashed up by Nazi storm troopers and their fathers were arrested and taken to concentration camps. I wrote scenes set on Kristallnacht, too. At this point, I wasn’t sure whether I would tell the story chronologically, or whether the book would open at the point where Anna and Molly meet, and Anna’s journey to England would be told in flashbacks. I decided not to fret about the structure, but just to write individual scenes, trusting that the right sequence would become obvious once I had finished the first draft. I’d never written a draft in this way before, and it felt very freeing.

I still hadn’t decided what adventure Anna and Molly would have together. But then, as I was researching details of children’s lives in wartime rural England, I discovered the fascinating BBC People’s War website, which contains written accounts by people from all over the UK of their lives during World War Two. I searched under ‘Children’ and found a piece called ‘When the Army Came to Stay’, by a woman called Pamela Hoath, who was the chauffeur’s daughter on a large Kent estate when the whole estate was taken over by the army. There was great excitement when the residents heard that Field Marshall Montgomery was coming to live in the Dower House, to oversee the training of the troops. 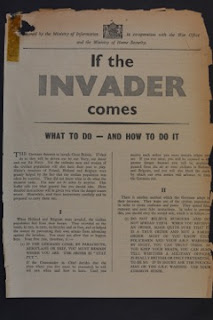 I also discovered online a facsimile of If The Invader Comes, a leaflet that was sent to every household in Britain in June 1940. The leaflet is written as a series of statements, instructions and orders, including such instructions as ‘Do Not Give Any German Anything.’

This leaflet and Pamela Hoath’s memories gave me the final piece of my story. Anna would be fostered by Molly’s family. Molly would be the daughter of the carpenter on a large country estate in Kent that is suddenly taken over by the army. So Anna, who has travelled all the way from Frankfurt to apparent safety in England, suddenly finds herself surrounded by soldiers again, at the very time when ‘enemy aliens’ are being sent to internment camps and the whole country has been warned not to trust a German. When she and Molly discover a strange man in their barn, Anna will have to use all her courage, resilience and ingenuity to face the challenges ahead. 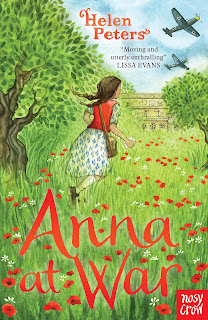 Sounds really interesting, I was in the Anne Frank museum in Amsterdam at Easter and the details were stunning and devastating. My dad and his parents were refugees in the second world war while my mum was an evacuee to the country from Liverpool. I grew up knowing odd details about the war and how small things made big changes that could change everything. I look forward to reading your book Anna at war.