The other day, I visited the Cambridge University Botanic Garden with two old friends from my schooldays. Since coming to live in Cambridge in 2010, I've visited often but not often enough. Every time I go there, I promise myself to be there for longer. To look more carefully at all that's growing there; to examine the marvellous specimens in the glasshouses.  But the truth of the matter is, I generally go there for  lunch or tea with friends, and we end up strolling through the wonderful forty acre site. Situated right in the middle of Cambridge and very close to the station and to many bus routes, it's a real oasis. You go in and immediately you are in a sort of paradise, an enclosed space which takes you into a landscape of trees and water and grass and, according to the time of year, different flowers and shrubs. 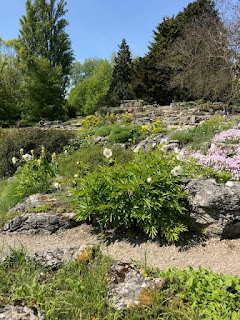 The photographs here are my own. I could have taken hundreds more. The Botanic Garden was founded in 1826 by John  Henslow, who was Charles Darwin's mentor and teacher. It's now part of the University and there are many scientists involved in all kind of fascinating experiments in plant science and related fields. It's very user friendly, especially since the café opened a few years back. The food is excellent and it was the first place I noticed which provided a bookshelf full of picture books for its youngest customers. You can sit outside under umbrellas and be surrounded, in the case of  my last visit, by beds of beautiful irises. 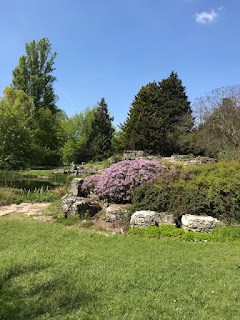 For someone who loves gardens so much, I have a very lazy relationship with them. I'm happy to walk in them, write about them, photograph them, discuss them, enjoy them in every way. The one thing I'm not prepared to do is work in a garden. I do not like gardening, but I like the results of gardening. My own garden is much better now than it was nine years ago when I moved into my house, and that's not thanks to me but to the local firm which has been looking after it, Atlas Gardens. I'm very grateful to them. 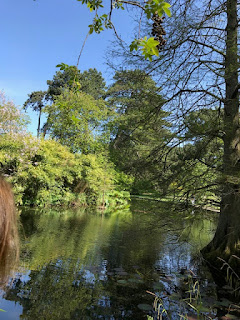 I visited the RHS Chelsea Flower show with Linda Newbery (a very good hands-on gardener who knows everything about plants of every kind) and Celia Rees, whose garden I haven't seen but who also strikes me as very knowledgeable. I've never been before and by the end of the day I'd walked over 8 kilometres: something I've never done before. It was a day so full of sensations and sights that I'm going to struggle to describe it here. Maybe many of you have visited and know all I'm going to say, but for those who haven't, here are my impressions.

A bit of history first. I had no idea that the RHS was founded by John Wedgwood, son of Josiah Wedgwood in 1804 and that the inaugural meeting of the seven men who were the first members of the new Society took place at Hatchard's bookshop in Piccadilly. The Wedgwood Garden was most beautiful, and had a pavilion next to it full of equally lovely china and delicious-looking teas, like Strawberry and Cucumber. 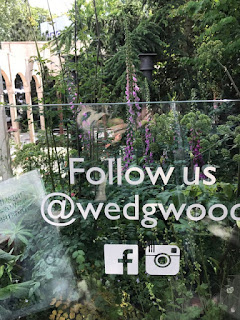 I was delighted to see that there was a real emphasis throughout on Education. The RHS are very good at spreading the word, through their gardens, the number of shows all over the country that they put on and the way they encourage everyone to live in a greener, more sustainable fashion. 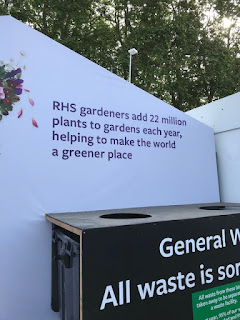 We didn't get to see the D-Day 75 Garden close up. All the tickets for the day we were there had been sold. But its presence at Chelsea is an education in itself. The Chelsea Pensioners paraded while we were there, and there were thousands who saw them and talked about them with their friends and the history passes on... 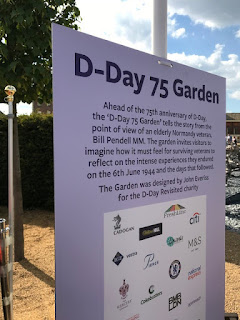 Below is one of my favourites: an African garden that emphasised the importance of educating girls. The motto Education Changes Everything chalked up on the blackboard is a good one and one that applies everywhere in the world. 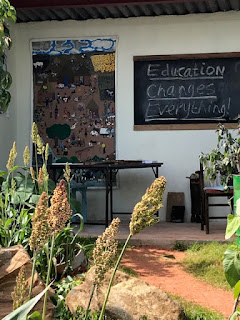 The Welcome to Yorkshire Garden won the People's Choice prize and I voted for it. What struck me about Chelsea (and I had to keep asking Linda about it!) was the fact that every one of these small gardens had been created from absolute scratch and that in a matter of weeks an empty wasteland is transformed every year into a gathering of most beautifully-designed gardens. This one had lock gates and water and a cottage and you could have sworn it had been there for hundred of years. 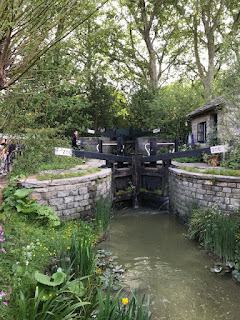 The Japanese garden was my absolute favourite, I think, but I wouldn't have the courage to shower in that building on the left! You can't see it from the photo but it is a shower room...maybe the glass becomes opaque in some magical way when you turn on the taps. 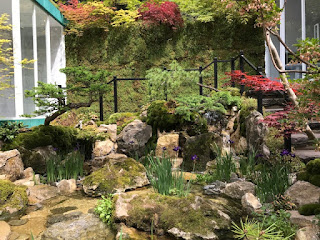 Thematically, wildness was the thing. All the gardens were unkempt and I was delighted to see this and feel much less guilty about my lawn now. I was particularly impressed with this flight of very unkempt steps. 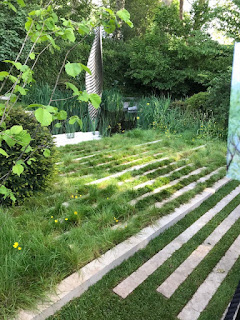 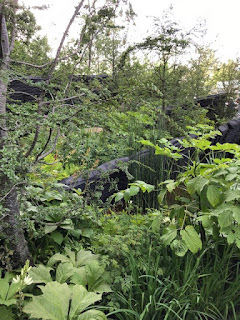 Here is the notice that greets you at the entrance to the Artisan Gardens. It's made of strands of wool and is full of beautiful colours. 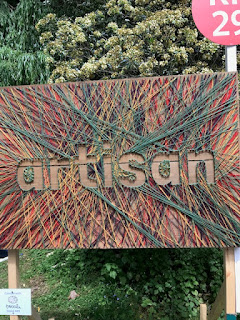 Here are some foxgloves, for no better reason than that they're beautiful. And the bees were having a wonderful time crawling into them. 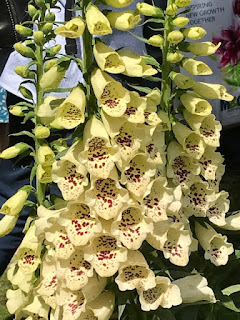 The Main Pavilion was astonishing. A huge area in the marquee filled with every kind of flower and plant and lots of wonderful vegetables too, some of which seemed surreal in their cleanness and hugeness, like illustrations from a children's book. 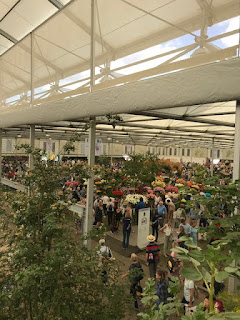 There were notices all over the show and this was my favourite and I am putting it here because I love the way it's expressed. That last line has the force of poetry. Also, it's true. 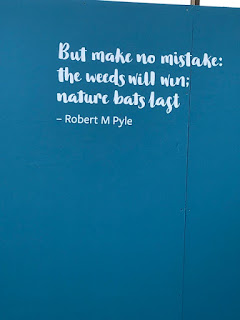 Lovely to see gardens featured here - the history of gardens (big & small), gardening & allotments is long and fascinating - and any sort of interaction with growing plants promotes a sense of wellbeing :)

sorry for my late arrival here, but thank you, Adele, for bringing back a truly magical day at Chelsea and lovely weather - unlike today! Also, my visit with you to the Botanical Gardens in Cambridge. I'll never forget that extraordinary cascade of turquoise in the hothouse. I didn't think such a colour existed in nature but there it was. Thank you also for describing me as knowledgeable - my stock of knowledge is tiny compared with Linda's and when it comes to roses, you are no slouch yourself!