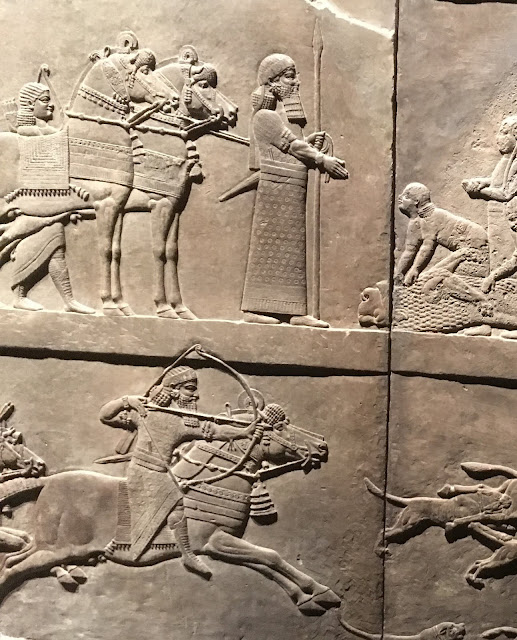 Behold Ahurbanipal, King of the World! So he liked to style himself, and he wasn't too far from speaking the truth: from 669 to c.631 BCE he was king of an empire that stretched from Cyprus to Iran; even Egypt came under his sway, and his city Ninevah was then the largest in the world. The British Museum recently held an exhibition about him and his empire, and I was lucky enough to get into it for the penultimate day. It was full of wall-plaques from Ashurbanipal's palace at Ninevah, exquisitely carved in a sort of comic-strip technique. Photos were encouraged, so I took a lot. In the one above, you can see the king hunting lions; he seems to have accounted for rather a number, if the reliefs are to be believed. At the top of the picture he looks on as the carcasses of lions he has killed are presented to him by kneeling servants. At the bottom, he gallops after a new prey - wild asses.

There was a good bit of  'Look on my works, ye mighty, and despair'  about Ashurbanipal's public face. Mind you he had perfectly good practical reasons for wanting to instil massive respect and reverence in his subjects. He ruled an area so vast that communications from one side to the other must have taken weeks; he had to rely on the dubious loyalty of vassal kings - some of whom were his brothers and rivals - and be prepared to go to war with them if they got above themselves. This also seems to have happened a lot. It probably helped to have spirits like these on side. This is an 'ugallu' or Great Lion. 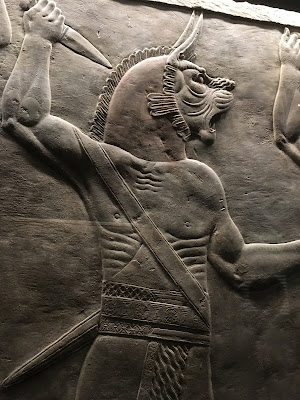 Though the exhibition is now over, there's a very good British Museum blog about Ashurbanipal here: https://blog.britishmuseum.org/who-was-ashurbanipal/ so I don't need to go into his life-story and anyway I'm far from an expert on Ancient Ninevah! What follows is really just glimpses of the exhibition via my photos, and a few impressions. 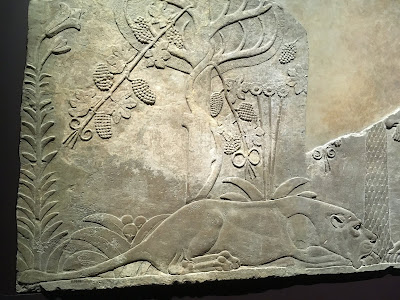 For one thing, Ashurbanipal regarded himself as, and indeed was, a man of culture and peace as well as of war. In the relief above, a beautiful lioness (I know) is relaxing in the shade of trees and vines in his menagerie. Ahurbanipal valued learning and boasted of his knowledge of arithmetic, reading and writing. He "developed the first systematically collected and catalogued library in the world", collecting together hundreds of thousands of clay tablets, 30,000 of which are kept by the British Museum. Some on display included parts of the Epic of Gilgamesh, medical texts, spells, letters, history... 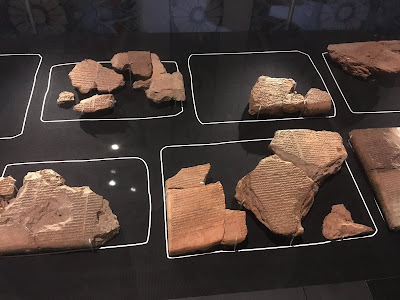 The tablet below is part of a letter to the king from the Chief Exorcist describing how he has cured the Crown Prince. But for another child of the king, he has been less successful...

Touchingly he writes, 'As to what the king, my lord, wrote to me - "I am feeling very sad. How did I become so depressed for this little one of mine?" - Had it been curable, you would have given away half your kingdom to have it cured. But what can we do? Oh king, my lord, it is something that cannot be done.'

When Ashurbanipal went to war, he was brutal and whole-hearted. The relief carvings show all the horrors in clear and graphic detail. Here, the Elamite city of Hamanu is being stormed. The king's Assyrian soldiers rush up a siege ladder to the the battlements; his archers fire arrows, men are flung from the walls and corpses float in the river. It's war reporting: you could move from scene to scene, frame after frame. 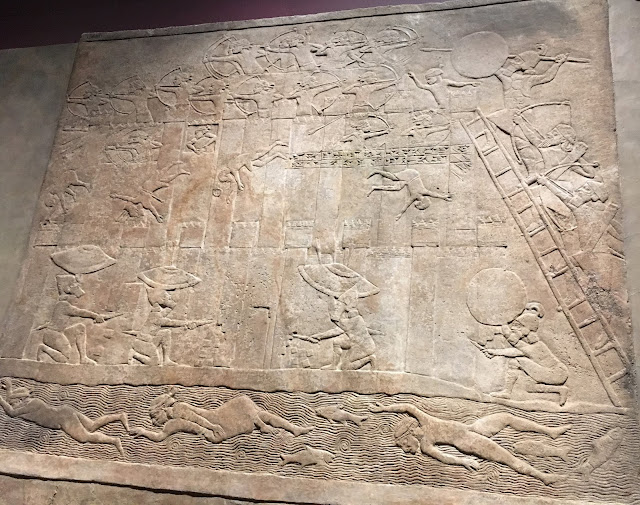 Elamite prisoners are marched away, fetters around their ankles... 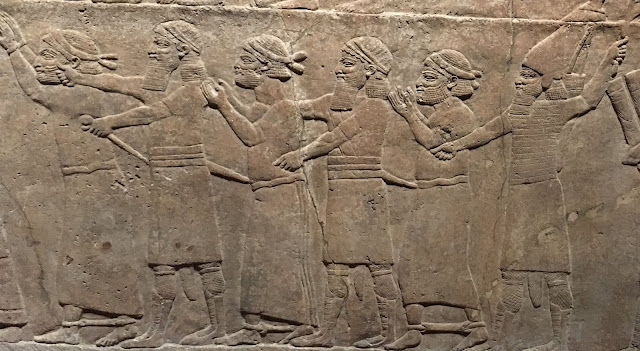 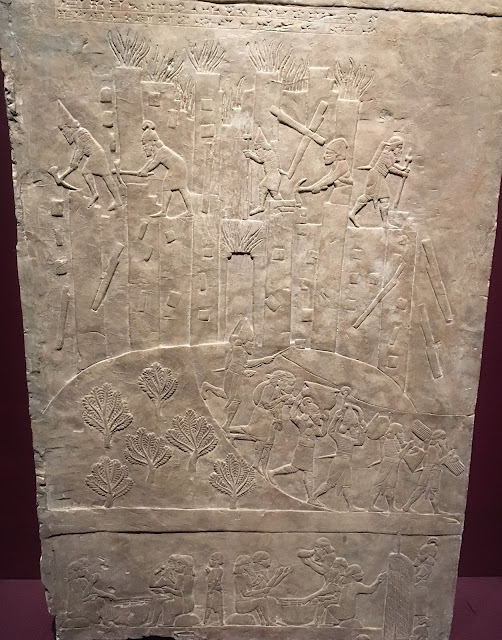 ... and the Elamite king is captured. Here he is in his bulbous head-dress, being pushed into a chariot. Note the stalking lioness at bottom left - is this a metaphor? 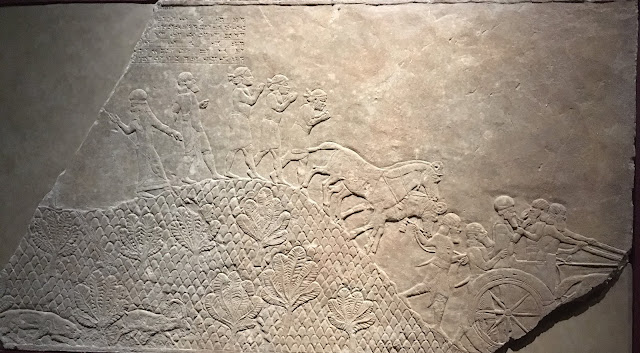 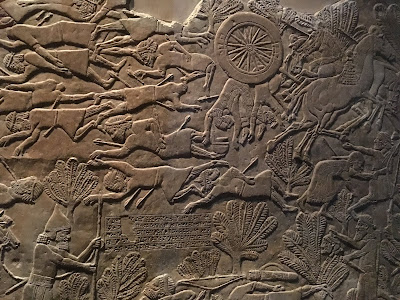 We left, our minds full of images of ancient wars, and went on to see the musical 'Come From Away' which strikes a wonderful balance of commemoration and celebration as it relates the true story of the thousands of passengers from 38 planes which were re-routed to the small town of Gander in northern Canada on the day of the September 11 attacks. As its wikipedia entry puts it:

"The characters in the musical are based on (and in most cases share the names of) real Gander residents as well as some of the 7,000 stranded travelers they housed and fed. The musical has been received by audiences and critics as a cathartic reminder of the capacity for human kindness in even the darkest of times and the triumph of humanity over hate."


We emerged from the theatre into Trafalgar Square, and there on the Fourth Plinth, we saw this. 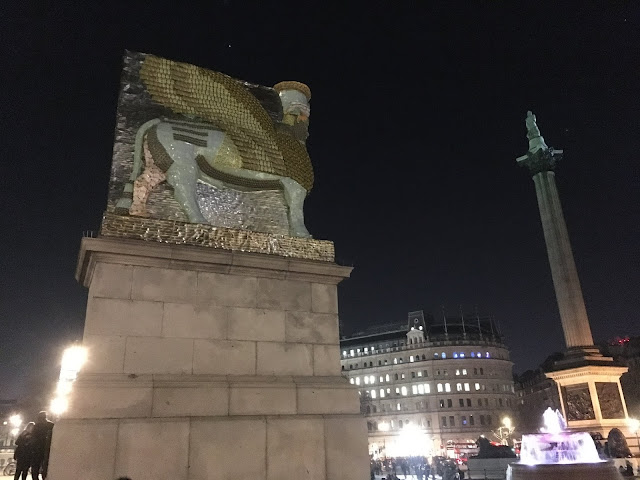 It's a Lamassu, one of the winged guardians of Ninevah - and it's a modern sculpture called 'The Invisible Enemy Should Not Exist' by Michael Rakowitz. I will quote from the London Assembly link https://www.london.gov.uk/what-we-do/arts-and-culture/current-culture-projects/fourth-plinth-trafalgar-square/whats-fourth-plinth-now:

"Michael started The Invisible Enemy Should Not Exist project in 2006. It attempts to recreate more than 7,000 objects which have been lost forever. Some were looted from the Iraq Museum in 2003, while others were destroyed at archaeological sites across the country during the Iraq War.
For the Fourth Plinth, Rakowitz has recreated the Lamassu. This winged bull and protective deity guarded the entrance to Nergal Gate of Nineveh (near modern day Mosul) from c700 BC until it was destroyed by Daesh in 2015.

"The reconstructions in The Invisible Enemy project are made from recycled packaging from Middle Eastern foodstuffs. The Lamassu is made from 10,500 empty Iraqi date syrup cans. This represents a once-renowned industry now decimated by war.

"The inscription is written in Cuneiform, one of the earliest systems of writing, on the side of the Lamassu reads: 'Sennacherib, king of the world, king of Assyria, had the inner and outer wall of Ninevah built anew and raised as high as mountains.'"

Well... Sennacherib was Ashurbanipal's grandfather. I found the coming-together of these three cultural events with their conjurations of conflicts both ancient and modern - the exhibition, the musical and the statue on the plinth - both meaningful and extremely moving.

History is a live project.


Posted by Katherine Langrish at 06:00