A Night at the Theatre: Penny Dolan 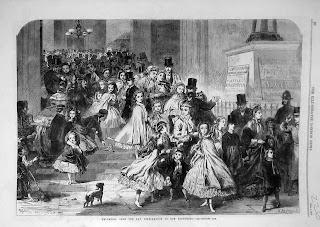 “Well after midnight, shrill childish voices woke me. Two small girls appeared around the corner. Rough wool shawls were gathered over their trailing gauzy skirts. Giggling and singing, the little girls danced over cracks in the pavements and hopped along the kerb, their legs thin as those of foals on the farm. Tinsel strands sparkled in their hair and their cheeks were smeared with paint.”
A Boy Called M.O.U.S.E

Ages ago, busy at my desk, I caught the end of a Radio 4 programme about theatre children in Victorian times. It included a short contemporary account of young children sent homewards after late night performances, with or without parents.

That account became the initial inspiration for the two six-year-old dancers Flora and Dora, described in the extract above, and also for Kitty, their older sister, about to come round the corner after them but slowed down by the bag of laundry she is carrying home to their two aunts.

I heard the programme before “Listen Again” existed, so I could not check the full content of the programme. Nor did I discover details of when and how the philanthropist Millicent Fawcett got her collection of influential names, including Charles Dickens, to voice their concerns over the moral welfare and risk of abuse of the many young performers.

Afterwards, I contacted the Fawcett Society, asking for more information about the subject but did not hear back. Perhaps the Fawcett office felt present good was more important than some rare archived documentation of historical goodness? The BBC were not able to help me track down the programme either, when I went to it. No record of it, especially as I didn’t have the programme’s title.

Compared to hundreds of child labourers in factories and mines in that period, the conditions of theatre children must have seemed unimportant but there were certainly horror stories.

Dr Ann Featherstone, Lecturer in Performance History at Manchester University, used her extensive research into the penny gaffs, seedy shows and exhibitions of human curiosities of Victoria’s reign to create the dangerous world of her two adult novels, “Walking in Pimlico” and “The Newgate Jig”. Her “past” is not a pretty place.

Later on, the playwright J.M.Barrie took up the children’s cause. By the time “Peter Pan” was staged, there were regulations about the welfare and education of the young performers.

Nowadays, most professionally staged shows have double casts to cover the hours that children are permitted to work as well as rules covering their health and safety, tutors and chaperones to look after them backstage and on tour. I have heard that scenes written for young screen actors have limited lines in the script to allow for this pattern of work and which may, indirectly, be affecting ordinary children’s speech. One wonders.

Nevertheless, some children are always be drawn by the glamour of performance and attention, whether they are fictional characters like Gabriel in Geraldine McCaughrean’s “A Little Lower Than The Angels”, travelling along with a cartload of Mystery Players, or the young film stars of the twentieth century, kept in apparent working condition by mixtures and medicines.

I chickened out from the seedy side. The life of my two young characters, Flora and Dora is hard but they have their watchful sister Kitty as protection and a happy home that becomes a kind of home for Mouse too. However, once-upon-a-time dancer Kitty still has a few dreams of her own.

Fascinating post, Penny, I love the picture you paint of the little girls running home. Must read this!

That was a magical moment in the book, Penny, and I loved the whole thing. Seriously everyone, read it: one of the best books I've read this year!

And I must look up those adult novels too. 'Dancing the Newgate jig' was a (blackly humorous) euphemism for hanging, wasn't?

Dickens has a lot about Victorian theatre in Nicholas Nickleby, doesn't he? Nicholas at one stage works for a travelling theatre group run by a family. As you'd expect, it's full of extraordinary characters - a dreadfully precocious child among others.

Ooh, ooh ... lots of lovely inspirational stuff here. I have characters and setting in the Victorian theatre hanging about waiting for a story which never quite seems to resolve itself.

1. must read the book

3. I'd forgotten about Nic Nickleby. Must re-read.