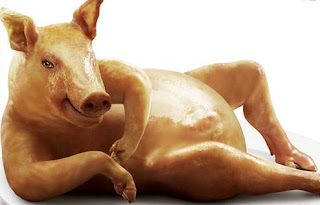 I’ve always loved obscure Balkan proverbs, perhaps because I am obscurely Balkan myself.

One of my favourites is this Albanian jewel: ‘In times of need, a pig is called uncle.’

For years, I’ve been trying to figure this one out. In restaurants in New York, I have asked Albanian waiters. Talking to old ladies on the vaporetto, I have trotted it out. (After all, the eastern Adriatic coast used to belong Venice.) I’ve looked in dictionaries. But it never adds up.

It might be that ‘pig’ is an insulting Albanian epithet for a policeman, just as it can be in Anglo-Saxon culture. ‘Uncle’ was once a general term of respect, especially in Eastern Europe. So when times get tough, one must be polite to policemen? Or is it something to do with the well-known intelligence of the pig? In difficult times, the pig’s sagacity deserves our respect?

This week, an explanation came to me sideways, as the best ones often do. 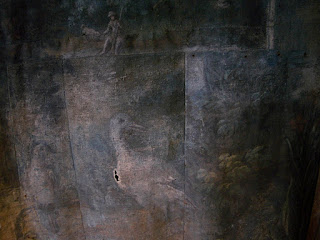 Our lovely Venetian electrician Denis was looking at my shabby but wondrous old tapestry, which is sewn together from twenty leftover bits of grander tapestries. It’s a rural scene of bizarre disproportion, with an improbably large goose dipping its feet in a mirrored stream in the foreground. Just behind, there’s a very small boy, the size of the goose’s head, playing with a miniature dog. Oak and beech trees dream into the shadowy distance. For me, my large scrag of painted canvas opens a peaceful verdant window on an 18th-century Italian countryside, right on my wall in the middle of intensely urban, marble-clad, waterborne Venice.

Denis laughed indulgently at my fantasy window. Then his refined Venetian features softened as he told me of a memory it brought him.

His grandparents were ‘proper peasants’, as he put it, who worked the land by the river Sile in the Veneto. They kept chickens and pigs on their small farm. It was a hardworking, simple life.

In those days, the Venetian lagoon island of Burano was inhabited solely by fishermen. It was not the tourist destination it is today. The Buranesi did nothing but fish; they ate nothing but fish. That is, until a few enterprising or plain hungry fishermen started sailing their boats up the Sile estuary to visit smallholdings by the river. There they would swap fresh fish for eggs, grain, chicken and ham. The farm of Denis’s grandparents was on this miniature trade route.

One day, the Burano fishermen brought a new item to trade: a beautiful old tapestry. In fact, it was something like the one I’m so proud of, Denis said politely (by ‘something like’, I am sure he meant ‘much better than’).

A deal was struck. So what did Denis’s grandparents do with the tapestry?

They used it to hang over the door of the pigsty to keep the pigs warm in the winter.

‘Pigs were king in those days,’ Denis said. ‘We lived on pigs. We lived for pigs. Everything for the pigs.’

So I am inclined to think that the Albanian proverb means that when you are hungry, you must be kind to pigs. Pigs are the bringers of all good things. Pigs can even bring fresh fish to an inland smallholding.

Pigs can even bring art.

The avuncular pig is from an advertisement for Rachachuros Seasoning.
Posted by michelle lovric at 05:13

Isn't this fun. And wouldn't 'A Pig Called Uncle' be a great title for a short story (and it's your story, so I won't borrow it).

What a lovely tale, and isn't it fascinating how we find answers when we're not looking for them? I had exactly the same instinct as Jo - what a fabulous title for a children's story!

I thought: I'll just see what the post is this morning... mustn't read it till later when I've done some work. But the pig proverb grabbed me! I couldn't stop! And what a marvellous combination of pig, proverb, eccentrically constructed tapestry and tactful Venetian electrician... I have been delighted, cheered & intrigued - thank you so much, Michelle!

What a wonderful story - what a beautiful tapestry.

My wise Serbian aunt (everyone should have one!) just did a little research on a Serbian language site where various sayings are interpreted.

She tells me, 'It turns out the same proverb does exist - or has existed - within the Serbian folk repertoire. It is, in fact, a metaphor. "In distress, even a pig may be called uncle", means, so they say, that if there's (serious) trouble, you need to accept the trouble in order to be able to overcome it. (And yes, you are right, the interpretation rests on the premise that "pig" [the word used denotes a male pig] is a pejorative concept. So you accept - call "uncle", ie kin - the misfortune, and then you can deal with it.) It seems to make sense, actually.'

I agree - it makes a lot of sense. But is there an English proverb that asks you to embrace or respect your troubles in order to come to terms with them? I can't think of one.

But perhaps the England has had less trouble than Serbia to accommodate?

I have lots of troubles. Perhaps I shall go outside and call my pig 'Uncle'. I suspect she will just get cross and assume I've forgotten her name.

My pig lets the chickens out now. So I can see why the electrician's family kept pigs AND chickens. Once you've got a pig, it can do the chickens...

Super post, Michelle but am I alone in finding that pig at the top of the page most disturbing? It wouldn't entice me to eat anything!

When I first read it I thought it meant that when you're in trouble you have to lie--pretending a pig is your uncle....

Maybe I should go back to bed. My mind isn't working properly.

Call the bear 'uncle' till you are safe across the bridge.

Stroppy Author, I'm sure you know about the amazing 'Arithmetical Pig' who used to be able to do sums with cards. Pig are cool and clever. So, for pigs, looking after chickens must be ... chickenfeed.

Adele, as a vegetarian, all pictures of animals as 'meat' are repugnant to me. But I was interested that this one dared to keep the identity of 'pig' while still representing it as 'pork', instead of pretending, as we usually do, that the meat is somehow separate from the animal, as if we can thereby cancel out the fact that we killed the pig to make the pork. This picture shows a pig with a personality who is also dressed for dinner in the proprietary seasoning.

Lovely blog, Michelle. I like your aunt's explanation but I do think pigs are so intelligent and can do the most amazing things. Pity most of us regard them as grubby creatures when, in fact, the are rather clean animals.