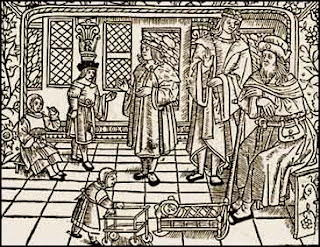 Everyone knows the speech made by Jaques in As You Like It about the Seven Ages of Man. But here it is again:


"....................................................At first the infant,
Mewling and puking in the nurse's arms.
And then the whining school-boy, with his satchel
And shining morning face, creeping like snail
Unwillingly to school. And then the lover,
Sighing like furnace, with a woeful ballad
Made to his mistress' eyebrow. Then a soldier,
Full of strange oaths and bearded like the pard,
Jealous in honour, sudden and quick in quarrel,
Seeking the bubble reputation
Even in the cannon's mouth. And then the justice,
In fair round belly with good capon lined,
With eyes severe and beard of formal cut,
Full of wise saws and modern instances;
And so he plays his part. The sixth age shifts
Into the lean and slipper'd pantaloon,
With spectacles on nose and pouch on side,
His youthful hose, well saved, a world too wide
For his shrunk shank; and his big manly voice,
Turning again toward childish treble, pipes
And whistles in his sound. Last scene of all,
That ends this strange eventful history,
Is second childishness and mere oblivion,
Sans teeth, sans eyes, sans taste, sans everything."

That is a horrific vision of old age, which I last heard delivered by an excellent female Jaques - Emma Pallant - in the courtyard of the Bodleian in Oxford as part of a Globe touring production.


But as a writer of historical fiction, I want to know WHEN this horrendous state of affairs might apply in any given period. We all know that life expectancy was lower in the past than today but how can we find out what it was?

My last novel featured Michelangelo Buonarotti, who lived till nearly 89 but how common was that in sixteenth century Italy? If you consult that oracle of accuracy, Wikipedia, you will find some quite specific statistics but they have to be modified, to take account of infant mortality. If you lived till the age of 21 in England, you could then add as follows, provided you were a male aristocrat:

But it must have been different if you were a peasant, or a woman, or - worst of all - both! I have been researching the Plantagenets over a long period now and was quite shocked when I discovered that John of Gaunt's first wife, Blanche of Lancaster, died in the Black Death in 1368, aged 23, having borne him seven children.

Yes, the bubonic plague was the scourge of the late 14th century but Blanche was a Duchess! Living in a castle! She didn't even get her 45 years but the history of the English monarchy would have been very different if she had. Still she is commemorated in Chaucer's Book of the Duchess - probably. 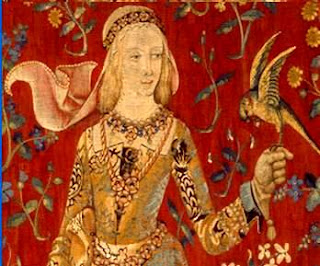 If your life expectancy - in any period - was between 30 and 40 years, your definition of terms like "young", "old", "middle-aged" etc. would be very different from if it lay between 80 and 90. We can see how this alters in our own lifetimes too, with every newspaper article that tells us our life expectancy goes up by two years every year.

In my last post, about my first History teacher, I mentioned how the Head of History at my secondary school appeared old to eleven year old me, but I bet I am older now than she was then. My opinion was based partly on her snow white hair - even though my own mother was completely white-haired by the age of 30 (the Lassiter gene).

My point is that as well as the absolute age or potential age of anyone in the past there is also the relative perception of their age by people younger or older than them. As novelists we must be sensitive to these issues.

We are also used to women in particular being defined by their age in the media. Whether it is P.D. James or Diana Athill being "wonderful for their age" (instead of just wonderful) or giving women Guardian columns when they reach a certain temporal milestone (Joan Bakewell, Michele Hanson) or applying a double standard to women older than their male sexual partners (using words like "cougar", "toyboy" etc.) it is clear that the Seven Ages of Women are different from those Shakespeare assigned the "All the world's a stage" casting too.

This is a perceptive post. Thank you. I think that assuming one survived youth that in Early English period women could live quite surprisingly long lives. Gytha , Harold Godwin's mother was certainly the other end of 60 at least when she died. There is a very interesting fictionalisation of Blanche's death in Katherine by Anya Seton.

What has always struck me about this is its masculinity. It brings out the feminist in me. I tried writing the seven ages of woman once, probably got too bogged down in the iambic pentameter and should have worked on what I was trying to say.

But the lives of women, in some eras, has been so different from the lives of men I still think it's essential that we look at this not only from the point of view of longevity, but also from gender.

Mary
You're right, perceptions of age and average life expectancies are gender specific. Take Jaques himself. He is based, at least in part, on Sir John (Ajax) Harington, inventor of the flush toilet (the jakes) and, at the time, a better known writer than Will. Hence the unfairly dour characterisation.
Sir John led a comfortable and privileged life but never even made the sixth age, dying like many of his peers in his early fifties, too weak to fight a fever and already sans quite lot. While his wife, married at thirteen, nine children in quick succession, manager of all Sir John's vast household and estate, lasted well into her sixties. For a female aristocrat to sail through nine confinements was in itself remarkable. She would have been attended by a doctor who would have considerably lessened her chances of survival. Which is why the average mortality risk in childbirth for 16th century gentry was higher than for the 'peasants'.

Blanche of Lancaster died aged 23 having borne seven children? Just reading that brings on a feeling of exhaustion (even though she would have handed them straight over, presumably, to a well-staffed nursery). What an interesting post - much food for thought. And the end of that alternative seven ages is very moving indeed. Thank you, Mary.

I know! But Philippa of Hainault (Mrs Edward 3rd), had thirteen children (don't believe Shakespeare) and was only 41 when she died. And Joan Beaufort, my current interest, had fourteen by Ralph Neville and two by her first husband. (Though she did make sixty-one!)

Even with all the servants, it quite exhausts one to contemplate.

I suddenly thought - with the succession of the firstborn currently being debated - that maybe the likelihood that any female would die in childbirth of death meant that the male only option seemed more likely to lead to longer-lasting power for the dynasty concerned?

Not saying I agree, just musing on the many reasons why these things come about and are accepted.

Apologies. Obviously dying "of death" was an editing slip. But not deniable.

All completely fascinating! And the thought of all those children, too...exhausting even to read about. And I'm reminded to search out Katherine by Anya Seton which was one of my favourite books when I was about 14 or so. I wonder how it stands up!

There were enough old women around in the Middle Ages for the portrait of the Wife of Bath (and Dame Ragnell) to be recognisable, though of course we don't know how old they were supposed to be. Physical deterioration might have been quicker, but many of the ageing features of modern life (tobacco, pollution, sunbathing) were not there, so maybe not *as* different as we might expect.

Maximum longevity has not changed much - there were just more chances of dying young. Archimedes died at 75; Sophocles at 91.