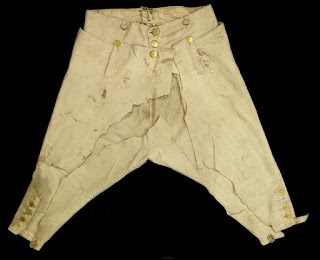 I’ve had a thing for Horatio Nelson since my father took me to visit HMS Victory when I was six years old. To see the very place where someone so famous had died made a great impression on my gruesome young mind. Later in life I became more interested in the particulars of the fatal wound  - left pulmonary artery severed by a musket ball  - but nowadays it’s the little personal details I love, such as what he was wearing at Trafalgar. Clothes draw you closer to the dead.

First, his breeches: standard-issue, white twill, fall-front style with little brass buckles and flag officer’s buttons. What’s so affecting is the way they’ve been hacked open, for swift removal when he was carried below decks for the surgeon to examine him.

Then there are his stockings, embroidered with his laundry mark and stained with blood, but probably not his own. John Scott, his secretary, was killed by a cannon ball in the opening minutes of the battle and Nelson fell in Scott’s blood when he himself was hit. I have this notion that Nelson had loops stitched to his stocking tops, to help him pull them up one-handed and so not always need the assistance of a valet. But there are no loops on his battle stockings - you can see them in the National Maritime Museum at Greenwich - so I must have imagined it.

They have his coat there too, and that really has a tale to tell. Nelson’s detractors sometimes suggest that he had a death wish, or that arrogance drove him to dress for the battle in his chivalric bling, tantamount to painting a bull’s-eye on his chest and challenging the enemy to shoot him. In fact he wore what was known as his ‘undress coat’ and the bling was a rather muted embroidered replica of the real badges. There’s a silk loop on the right cuff, which was hooked over a lapel button to keep his empty sleeve out of the way. And then there’s the shattered left epaulette which marks where the musket ball struck him.

While Nelson was dying a young midshipman called George Westphal lay injured close by and Nelson’s coat was rolled up to make a pillow for him. The blood from Westphal’s head wound congealed and stuck to the bullion fringe of the epaulette which had to be cut away to free his hair. He made a full recovery and was allowed to keep the piece of gold fringe as a memento. The coat, stained with blood, was given to the Nelson family who loaned it to Lady Hamilton, for her lifetime. But when she fell on hard times she pledged it as security for a loan and for many years it was lost to view. How it came to be retrieved and given to the nation is a story for another day.
Posted by Laurie at 01:30

There's something wonderful about seeing the real thing. And it's not the gruesome relic thing, it's the story it has to tell. This is what Archaeology and forensics are about. Thanks for te fascinating post!

This is wonderful, Laurie, and I love the way you've linked it to Nelson's garments! So fascinating... :-)

This reminds me of the documentary on Victor Hugo that I caught the last night on French TV. His family saved almost everything related to his eldest daughter after her early death by drowning- including the dress that she had died in. It's still stored, carefully rolled up, with Mrs Hugo's note that it is a 'sacred relic'.

I got the same chills as I did when I saw the uniform that Michael Collins was killed in when I was in Dublin.

So close and so far.

Brilliant, Laurie. I thought I knew a lot about Nelson, but the intimacy of these little physical details just brought him totally to life.

You've also given a wonderfully powerful sense of the closeness of battle - the blood of three different men on these garments. I remember when I went on HMS Victory being stunned by how small the deck really was, and again this detail has brought it all home. Thank you for a great post.

What you say about the small size of the ships, Louise, reminds me of the time I took a ferry to Williamstown, a coastal suburb of Melboure. It has a history and I remember the ferry pilot pointing at some cute little mini-ships nearby and saying that people had migrated to Australia in them! In a six foot boat called, appropriately, the Tom Thumb, three men, Bass, Flinders and Martin, did some exploring and charting of the coast around Port Jackson in Australia. Three full sized men!

There was a fabulous exhibition at the Maritime Museum at Greenwich in 2005 entitled "Nelson and Napoleon", as part of the commemorative events for the bicentenary of Trafalgar. Nelson's clothes were there on display--as well as his pigtail, the ball that killed him and the surgeon's instruments that were used on him. I don't know anyone who didn't cry when looking on that display.

Patrick O'Brian makes it clear too that captains did not wear their best uniforms into battle. They wore their older or second best coats--and in the O'Brian novels, after the battle, Killick (Captain Aubrey's servant) is always complaining about having to get the blood out of the coats and breeches...

The breeches were kept after the battle by Royal Marines officer Lewis Roteley, who took command of the Marine detachment on HMS Victory after his CO was killed. He saw Nelson hit and ordered his men to fire back at the fighting tops of the Redoubtable, clearing them in short order. Roteley had joined the service after being introduced to Nelson in 1802, when the admiral came to Swansea with Emma Hamilton during his tour of south Wales. (Roteley's father kept a pub there.) Nelson was impressed by the lad's knowledge of the sea and smoothed his path into the Marines, so it's both ironic and poignant that their paths crossed again in the way they did. There'll be more on all this in my new book Britannia's Dragon: A Naval History of Wales, due out next March.