Bonnie Tyler sang about looking for her hero who had to be strong, fast, fresh for a fight - a white knight on a fiery steed.  The history girls have been set the task of finding one for each day of this month and I've been worrying about mine.

It's tricky picking a hero because, of course, bar a few saints, most historical characters have distinctly clay feet.   I could have chosen Sheridan's contemporary, William Wilberforce, who helped change the way we think about slaves, factory conditions, animal rights to name but three of his causes, all the while struggling with ill health and addiction.  Or Jane Austen, because I love her writing.  Or Mrs Barbauld, the poet, for bringing women into scientific discourse.  Or Fanny Burney for her novels but also for having a mastectomy in the days prior to anaesthetics.  She survived to write about it in one of the most terrifying but empowering pieces of autobiography I've ever read.  And that's just some of my heroes of the late Georgian era.


No, I chose Sheridan because frankly he's a rogue - and an amusing one at that.  His clay feet were fully on display.

I'm sure I don't have to tell you about his brilliant comedies, many still performed today, and his significant parliamentary career where he was the most admired orator and one of the leaders of the opposition sitting on the benches opposite Pitt.  His politics were on the radical side, a friend of the French Revolution in its early days, and a progressive on many issues.
That's not why I like him.
I like him for his flash and daring.  He fought two duels with the same man over the object of their joint affections, the glamorous young opera star,  Eliza Linley, almost losing his life in the second confrontation.  He might have been drunk (he usually was).  Reports have him lying near death on the ground, the locket with the picture of his love torn from his neck, leaving a wound, a scoundrel opponent stabbing when he was down.  It gets even better - he was patched up, Eliza dashed to his side and they married, going on to live unhappily for the rest of their lives. I'm afraid such a romantic beginning has a very sad conclusion of affairs and arguments. 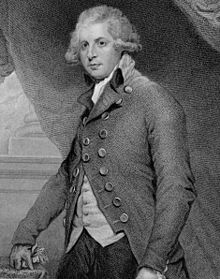 His other memorable roguish achievement in my mind is the total Ponzi scheme of rebuilding Drury Lane - the whole thing was so misjudged it was the Millennium Dome of its era.  He borrowed from Peter to pay Paul, knocked down Garrick's intimate Drury Lane and rebuilt a huge auditorium where it was hard for the audience to hear and see the actors.  He avoided going to debtor's prison by the fact that he was a member of Parliament and immune from prosecution.

Then in an ending fitted to his dramatic career, the building burned down.  Hearing the news, he took a seat in his favourite cafe in the Piazza and watched his theatre go up in flames.  He is reported to have said when challenged 'A man may surely take a glass of wine by his own fireside.'

I borrowed him from real history for my Cat Royal books written under my pen name Julia Golding.  He is the perfect mentor for my heroine as he is unreliable and allows lots of space for danger and adventure - and he owns a theatre, my perfect setting.

He's my hero because he reveals the Georgian period in all its garish, corrupt, wonderful, progressive features.  A man who had few Rivals at the time to match his brilliance.

If you'd like to see more, there's a little video of him talking about his role in my books.

Fabulous choice for fabulous reasons - I love this post! At school my class was considered too 'thick' to study Shakespeare for CSE/O level - so our teacher selected an alternative from the syllabus: Sheridan's 'School for Scandal'. We were taken to see an utterly brilliant production in London, starring Beryl Reid, Michael Siberry, Clive Francis, Donald Sinden, Michael Denison and Dulcie Grey - it was deliciously hilarious & I fell in love with the whole thing. And I was lucky: I was often taken to Startford so I got to know plenty of Shakespeare plays outside school... but I don't think I would otherwise have got to know anything by Sheridan.

Loved this and loved School For Scandal. Our staff put it on at my school and my French teacher was suddenly revealed as a marvellous actor!

A dashing romantic hero and a brilliant playwright - yet I can't quite forgive him for forbidding his talented wife ever to set foot on stage again once they were married. I know, it was the morality of the times; but for someone who sent up hypocrisy so devastingly in his comedies it comes as a shock to find him such a prig in his private life. Hence the unhappy marriage?

Hooray! Lovely to see one of my lifelong heroes getting his due here; particularly appreciate the modern parallels (not to mention your disdaining the deranged epitaph ;-)).

I think I have read that quote about having a glass of wine at his own fireside. You have to admire that. His life going up in smoke, literally, and he can joke about it. If it was me, I'd be in tears.