IN HIS OWN WORDS - DIARIST THOMAS TURNER, by Jane Borodale

It was hard trying to decide who, out of all the millions, might be my favourite person from the past – because apart from other considerations there is always the unbridgeable gap between who they actually were and what we have left of them. Diaries being possibly the nearest we can get to interior thoughts from the past – in the end I was torn between shopkeeper and diarist Thomas Turner, and Dorothy Wordsworth (intelligent, intriguing, influential sibling of William) – and (apologies, sisterhood) Turner won through on this occasion because I was more in the mood to be with him in Sussex.

In many ways Thomas Turner (1729-93) is the quintessential Mr Ordinary, Everyman, the man in the street. Literate, and having a pivotal role in the life of the village of East Hoathly in Sussex, he was at once shopkeeper, grocer, mercer, undertaker, tax-gatherer, writer of wills and accounts, overseer of the poor, churchwarden and more. But the remarkable or notable thing about him (in terms of posterity) is the diary itself. Two hundred and fifty years have passed since he began writing it, yet his character still jumps off every page; vibrant, busy, flawed, self-chastising, hypocritical, keenly-reading, drunken, generous, unhappily married. 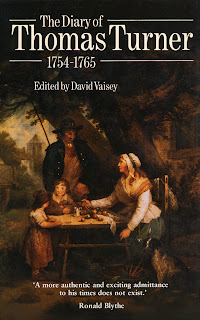 The first surviving entry is soon after his marriage to Peggy Slater in 1754, when he was 24 years old, and the diary continues for the next 11 years, including the death of his wife and only child. The narrative finally breaks off just after the beginning of his second marriage, though he lived for another 28 years, fathering 7 children, and was buried in the churchyard at East Hoathly. The original manuscript is now held in the Sterling Memorial Library at Yale University, but a third of it is readily available to all in an edition published by OUP and edited by David Vaisey - and what an extraordinary, detailed record of vernacular 18th century life it is. It was a fantastic resource for me while I was writing my first novel The Book of Fires, because he lived very close to the childhood home of my central protagonist Agnes. There is nothing so vivid as reading pages of actual living set down by actual people from the period you are spending your days and nights dreaming about.

It’s far too difficult to sum up Thomas Turner in a nutshell so – enough of my version of him – he can speak for himself:

“Sat. 17 July [1756].  In the morn after breakfast went down to Mr. French’s to get him to bring me from Lewes half oz. cauliflower seed, and when I came there, I found Mr. French, his servants, and Tho. Fuller a-catching of rats; so I stayed and assisted them about 3 hours, and we caught near 20.
Sun. 18 July … After churchtime my wife and I went up to Mr. Jos. Burges’s and drank tea there and stayed till between 9 and 10. But I think I never saw children humoured more to their ruin than theirs, Mrs. Virgoe’s excepted.
Thurs. 22 July … Mr. F. Elless and I walked down to the Nursery. My business was to get some money out of Edmund Elphick, but could not. Never, never was money so scarce as now. We came home about 8 o’clock. As we went along, we laid 1lb. of gingerbread concerning the length of the church field footway. I laid it were 38 rods, and he that it was not. So accordingly as we came home, we measured it and found it to be 39 rod and 3 feet, so that I won this great but innocent wager. This day Mr. Porter’s daughter was baptized by the name of Elizabeth.
Fri. 23 July.  In the morn Mr. French and the keeper drawed the pond before our door and made us a present of a brace of carp. Afterwards we went down to the church to take Peter Adams’s bond out of the chest in the church to ask Mr. Poole’s advice on it. We went into Jones’s and spent 5d. apiece. Dined on a piece of pork and peas with a baked beggar’s pudding.
Sun. 25 July. … This day I had a sailor at the door who asked charity (and whom I relieved), who could speak 7 tongues.
Mon. 26 July.  My brother came over in the forenoon. I also went down to Mr. French’s to take the measure of Sam for a hat. In the afternoon, wrote out Mr. John Vine’s bills. This night our servant sat up with Joseph Mepham. Read part of Hervey’s Theron and Aspasio. This day gave Dame Dan a pair of stock and hand cards on the parish account.
Thurs. 29 July.  Paid the gardener at Halland 8d. for 1 gallon of currants for myself and 1 hundred of walnuts for my mother … Mr. Coates informed us that Admiral Byng was arrived at Spithead where he was under an arrest for cowardice and misbehaviour in the Mediterranean relating to the losing of the Isle of Minorca.
Weds. 7 Sept.  Mr. Burges has a sister to keep his house, whose name is Jael, and I think the greatest oddity I ever saw. It’s her misfortune to be deformed by nature; i.e. squint-eyed, a great stammering in her speech, and very much on one side. But yet her greatest misfortune is in her unhappy temper, for she even appears to [be] so miserable that we may justly say she is poor in the abundance of riches…
Mon. 12 Sept. … After breakfast Mr. Burges and I went down again to talk with Osborne’s servant about her being big with child, but she would give us no satisfactory answer.
Sat. 17 Sept. … I am come to a resolution, as I am so continually almost troubled with the inflammation in my eyes, to leave off during life (unless anything very material should intervene) eating any sort of meat, unless sometimes a bit of boiled lamb, mutton, or veal, or chick, or any such harmless diet; as also to refrain from all sorts of strong liquor.
Sun. 18 July.  My whole family at church in the morn, that is, myself, wife, maid and 2 boys … we dined on a piece of boiled beef, a currant suet pudding and carrots.

Tues. 25 July [1758].  Oh what a misfortune it is upon me my wife’s being lame again, but let me not repine, since it is the Divine will. This is the twenty-ninth day on which we have had rain successively.
Weds. 2 Aug.  I completed the reading of Gay’s Fables, which I think contains a very good lesson of morality; and I think the language very healthy, being very natural.
Sat. 5 Aug.  I came home in company with Mr. Elless, about ten; but, to my shame do I say it, very much in liquor.
Sun. 6 Aug.  Pretty bad all day, with the stings of a guilty and tormenting conscience.

Fri. 22 Feb. [1760].  Paid John Cayley 2s. for the rent of our 2 seats in the church. Paid Tho. Burfield 7s. 6d. for 1 dozen beehives received by him today. We dined on a chicken roasted, a piece of boiled pork and turnips. At home all day. Very little to do all day; a most melancholy time – my poor heart is almost sunk with trouble! Dame Durrant made my wife a present of a fat goose.
Mon. 3 Mar.  In the even wrote my London letters. My wife went down to Mr. Porter’s, their youngest child being very ill.
Tues. 4 Mar. … In the even went down to Mr. Porter’s, to take instructions for the funeral of their little boy, who dies this morning about 8.20, aged about 9 months.
Tues. 7 Oct. … Dame Durrant and Mrs. Virgoe drank tea with my wife, who is extremely ill. In the even there was a rejoicing at Halland and a bonfire for our armies under the command of General Amherst having taken Montreal and all Canada from the French. All the neighbours were regaled with a supper, wine punch and strong beer. Today sent Thomas Durrant to Brighthelmstone for Dr. Poole, who came to my wife in the even, who is prodigious ill. At home all day and thank God pretty busy.”

I’d love to go on and on transcribing Thomas Turner's voice but time is up. Visit my website www.janeborodale.com to carry on in the vein of 18th-century Sussex, or better still, come along to a fabulous Historical Fiction Day at the Weald and Downland Open Air Museum near Chichester, on Sunday 5 August 2012, 10am-5pm. Speakers include Alison Weir, Maria McCann and Emma Darwin, and there are a few tickets still available for the day. More details on the Weald and Downland Museum site.

Fabulous post and I shall be reading Book of Fires.