I am one of those annoying people who havers like mad when asked to decide on a favourite book, film, flower - anything. The only one I don't have to think about is my favourite colour (blue, since you ask).

So you may imagine the agonizing, the hair-tearing, the burning of midnight oil when we History Girls were asked to settle on our favourite historical character for our anniversary month. I mean, how many historical characters are there? Not a few, and that's for sure. I could pick anybody from Great Aunt Flo to Alexander the Great (except that I know very little about either of them). 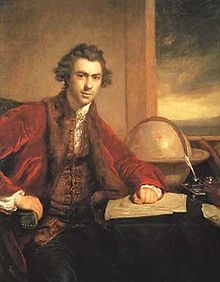 But then I thought of Joseph Banks. Favourite? I don't know. Well known? Possibly not. The sort of person you just know would be really good company and never short of a tale or three? Definitely, yes. So here goes.

Banks, born in 1743, came from one of the wealthiest families in England. When he was a teenager at Eton, he emerged from a swim in the Thames to find that his friends had gone on ahead. Walking back through the green lanes, he suddenly noticed, illuminated in the slanting golden light of the summer evening, the variety and beauty of the wild flowers growing in a hedgerow - and that was it: he was hooked. From then on he was determined to study botany. At Oxford there were no teachers of the subject; undaunted, he set off for Cambridge, persuaded one of their botanists to come back with him, and paid him from his own pocket.

After university, when others of his age and station were setting off on a relatively sedate Grand Tour of Europe, Banks decided to embark on his own kind of Grand Tour - of the world. He began by buying a berth on the HMS Niger, and set off for a seven-month exploration of Labrador and Newfoundland, botanising and writing a racy, very badly spelt journal.

But this was only a prelude. In 1768, a certain Captain James Cook was given the task of setting forth to the South Seas in a ship called The Endeavour, there to observe the Transit of Venus. (The Transit of Venus, when Venus can be seen travelling across the face of the sun, occurs less than once every hundred years. You may recall that there was one only a month or two ago. We, of course, were unable to see it - sun? What sun? It's important because it can be used to make significant measurements. Don't ask me how - sadly, I'm not a scientist.) He was also secretly  ordered to see if he could find the fabled Southern Continent, preferably before any of the other colonial European powers did. With him, as chief botanist, went Joseph Banks. 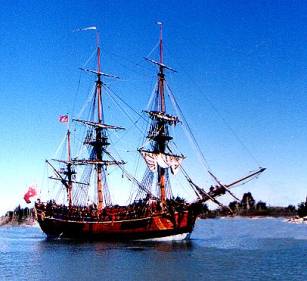 The undoubted high spot of the voyage was the period - which lasted for some months - which they spent in Tahiti, known to them as Otaheite; this was where the astronomical observation was to take place. Banks was entranced - by the beauty of the island, by the lushness of its vegetation - and by the friendliness of its women. He was twenty six years, tall and good-looking, with a twinkle in his dark eyes, and a good deal of mutual appreciation ensued.

A warm and gregarious character, he complemented the much cooler Cook effectively. The Tahitians had different customs to the Europeans, including a very different attitude towards property: Banks sought to understand, not to patronise, and could be relied on to defuse difficult situations. He learnt their language and studied their rituals; he behaved, in fact, like an anthropologist. When the expedition returned to England, Banks in particular received a rapturous reception and was invited to all the best parties. A few years later, he became the President of the Royal Society. 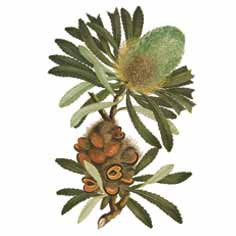 His travelling days were pretty much done, but he didn't sit back and revel in his riches. He became a friend of George 111, and developed Kew as a major botanical garden. He sent plant hunters all over the world - but he was also heavily involved in the exciting scientific and artistic life of the time, encouraging and mentoring younger people such as the astronomer Herschel and his sister, Caroline. He was a generous, intelligent enthusiast - a figure of whom it could truly be said that he was larger than life, and he was a significant figure internationally too.


But there is a twist. We've often grappled on this blog with the extent to which our twenty first century sensibilities affect the way we think and write about people from the past. I think Joseph Banks - Sir Joseph, as he became - would be a lovely person to meet, and to my mind he had an enormously positive influence on his world.. In his attitude towards the Tahitians, his would seem to be a relatively modern sensibility. Yet when he was Director of Kew, he spotted the potential for transplanting crops from one colony to another, for the the economic good of the Empire. He saw the world as a glorious, fascinating place - but one which was there largely for the benefit of the British Empire.

Still - there he is. My favourite. I think.

For further reading, I can thoroughly recommend Richard Holmes' marvellous book, The Age of Wonder.
Posted by Sue Purkiss at 05:00

I've always assumed Banks was the inspiration for Stephen Maturin, the naturalist side-kick to Jack Aubrey in Patrick O'Brian's masterpiece Master and Commander series of sea-novels. But from what you write, O'Brian switched the temperaments of Cook and Banks for Aubrey and Maturin!

I am occasionally reminded of Joseph Banks by the "banksii" on latin plant names so feel very pleased to discover from your post that the man himself was such a warm and forward-thinking person. (And a good post to read after an hour or more of R4 news! The day now feels better. Thanks.)

I love the 'mutual appreciation'. How delicately phrased! :-)
He ties in with several people I've read a lot about and yet I'd never heard of him. Fascinating!

Thanks, everyone - I think we need a jolly Joseph and a dream of Tahiti on a morning like this! Penny - his family home was Revesby, in Yorkshire - I don't know if it still exists, or if you've heard of it?

They are fascinating, those eager early botanists, and your Joseph seems a lovely man - and yes, a dose of loveliness IS good for the rain-drenched soul!

I like your interesting choice, Sue, and your lovely turns of phrase. He wasn't a perfect man, but I don't think he would have achieved so much if he was 'perfect'.
The subject brought back memories of when I did the publicity in the late 80s for 'Sir Joseph Banks' by H B Carter (a tome from the Natural History Museum).

Thank you, Paeony - and how interesting! I didn't know you used to do publicity. Were there free trips to Tahiti - free gifts of plants he discovered?

"Well known? Possibly not." I can't help chuckling over that. How well known he is depends where you live. Here in Australia he is a very big name! You can't go to Botany Bay in Sydney without thinking of him; Cook named it because of all the plants found by Banks there. Banksia are named in his honour. And so on. :-)
Nice post, Sue!

PS Nice to hear he helped out the Herschels too. Caroline is one of my heroines. She and her brother started life in music and ended up as astronomers.

I think that's the thing i like most about him - his interest in other people, and his generosity.

I did enjoy this - and yes, he looks definitely fit. I think the stories of plant hunters are rreally interesting - so many of our 'ordinary ' garden plants were found.so far away and often brought us after many adventures.