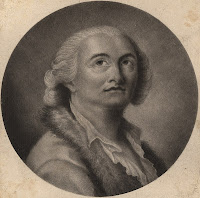 Perhaps it is a little wrong-headed of me to pick a fraudster and fake like Cagliostro as my hero, but there is something about the way he blasted a trail through 18th century Europe that makes me want to applaud. I would under no circumstances however lend him any money. I’m sure someone would though. His eventual disgrace did not make everyone loose faith in him and even today he has fans who claim he was an enlightened being at the very least, and possibly didn’t die at all but still moves among us, granted eternal life by his alchemical expertise.

Cagliostro was born in obscurity in 1743 and ended his life the prisoner of the Inquisition having been the favourite of Royalty across Europe, a healer of the poor and a key player in the Affair of the Diamond Necklace that helped bring down the French Royal Family. He trained as a healer in his early years, but abandoned the robes of a novice monk and soon began to use his obvious skills as a con-man and apparent communicator with the spirit world. He convinced a man from his town to invest some gold in his attempts to discover mystical treasure which was buried nearby and guarded by dangerous spirits. The investor received a beating from the ‘spirits’ and Cagliostro left town with his money. It was a con he used at other times. He married and began a peripatetic life often living off the generous presents of his wife’s ‘friends’. His encounter with Freemasonry in London lead to his creation of the Rite of Egyptian Freemasonry for which he founded lodges across Europe. It was a heady mix of science and mysticism open to both men and women and it went down a storm. He was the darling of the bored aristocrats everywhere he went. The Cardinal de Rohan showed off a huge diamond which he claimed Cagliostro had grown for him, and he stunned the Court of Poland with his clairvoyance and premonitions. Not everyone was convinced. Catherine the Great gave him a dusty reception in St Petersburg and Goethe thought him a fraud, though many scholars find traces of him in Faust as they do Sarastro Mozart’s Magic Flute. Cagliostro founded hospitals where he treated the poor for free and their entrance halls were piled high with the crutches no longer needed by his grateful patients. He showed off his ability as a forger to Casanova and in the end was betrayed to the Inquisition by his wife after her attempt to kill him by soaping the stone steps outside their house failed. You can find out the full story of his fascinating life in The Last Alchemist by Iain McCalman. 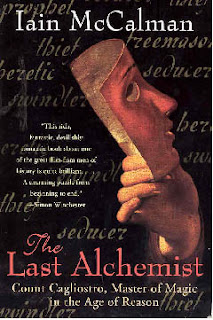 So why is this terrible man a hero of mine? Because he was a brilliant story-teller and creator of stories, he understood how to use ancient symbols and myths to weave a world that made people feel they were part of a magic universe and by a sheer effort of will and imagination he transformed himself from a nobody born in poverty to the most talked about man in Europe. That seems pretty heroic to me.
Posted by Imogen at 01:00

What a great character, Imogen! Thanks for telling us about him.

I'm thinking he can't have been that terrible if he was a story-teller who founded hospitals that treated the poor for free! ;-)

Fantastic, Imogen. You've sold me completely on a character I knew nothing about.

And I'm so glad to see another 'less worthy' favourite here. 'Favourite' rarely translates to 'thoroughly decent and principled' for a writer, and Cagliostro sounds very much my kind of man...

Have you read "The Queen's Necklace" by Frances Mossiker? I can't recommend this book enough. There are quotes from the memoirs of many of the players in the whole mess.

It's amazing how people can delude themselves, isn't it?