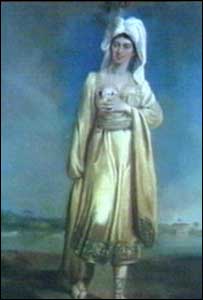 There are too many favourite people to name, John Ystumllyn, who runs a close second (look him up, go on) never made it into a book because his was, apart from the whole child kidnap and enslavement thing, oh, and the problems with his in laws (hah!) a quiet, good life.

And quiet good lives don’t make the best stories. As a writer one can’t help being head over heels with stories and even though I am definitely one for the quiet life the young woman I’m writing about today took the only way she could make out of a very diffiult reality; lies and stories.

There she is, in yellow silk, all turbanned up, Princess Caraboo. A young woman who loved dressing up and pretence so much that she ended up playing South Seas princess to landed gentry and academics who believed her to be the real thing. After all, she could swim, dance, fence and hunt and spoke in a language nobody could understand.

She was discovered on the road outside the village of Almondsbury just east of Bristol. It was late April 1818, and she was faint and thirsty and the locals assumed she was foreign born by her dark skin, turban and an inability to speak English. However, she was, by all accounts, very, very pretty.

Eventually the local lady of the manor, an American born blue stocking with a penchant for anthropology persuaded her husband to take the girl in. Mrs Worrall, bored and lonely, her son away at school in London, took it on herself to study the girl, and bit by bit, and with the help of academics sent for from Edinburgh and London, they deciphered her speech, taught her some English and learnt and believed her story.

She was a Princess, from an island in the South Seas called Javasu, she had been kidnapped by pirates and escaped and swam to land close to Bristol. She was alone and homesick, in fact she ran away more than once and suffered bouts of some kind of illness, pneumonia or nervous exhaustion.

After a month or so the local press in Bristol and Bath sent a reporter, samples of her handwriting were sent to Oxford professors, and a Dr Wilkinson of the Bath Philosophical and Literary Society persuaded Mrs Worrall that Caraboo should appear at a series of lectures. She was a cause celebre, her portrait was painted, visitors flocked to the Worrall's house, Knole Park, to see her.

Princess Caraboo  went to Bath. Dr Wilkinson arranged the first lecture. But one day, in the street, someone recognised her. She was not the Princess Caraboo, but Mary Willcox, a cobblers daughter from a small village in Devon. The story was all over the national papers, here was a girl who had taken the toffs for a ride, she had been whatever people wanted her to be, she had fooled the lot of them, reading Mrs Worralls’ anthropology books and making it up as she went along.

This is part of a poem printed in the Bath Herald at the time;

Oh! aid me, ye spirits of wonder! who soar
In realms of Romance where none ventur’d before;
Ye Fairies! Who govern the fancies of men,
And sit on the point of Monk Lewis’s pen;
Ye mysterious Elves! Who forever remain
With Lusus Naturaes, and Ghosts of Cock Lane;
Who ride upon broom sticks intent to decieve
All those who appear pre-disposed to believe,
And softly repeat from your home in the spheres
Incredible stories to credulous ears;

With everything marvellous, eveything new,
We’ll trace a description of Miss CARABOO.
And where did she come from? And who can she be?
Did she fall from the sky? Did she rise from the sea?
A seraph of day, or a shadow of night?
Did she spring upon earth in a stream of gas-light?
Did she ride on the back of a fish or a dog?
A spirit of health, or a devil incog?

Mary Willcox escaped punishment, Mrs Worrall, I think, loved her as a daughter. So she was bought a passage to America where a series of theatrical appearances were booked. But she failed to excite Americans, too many of them, no doubt, had reinvented themselves in a new land, and thought it not so much of a big deal, so she returned and lived out her life quietly.

She died an old lady, with one daughter, a successful business woman and supplier of medicinal leeches in Bristol.

Those are some of the facts. How this girl, she was 26 at the time of Caraboo, came to be on the road, how she so loved stories and pretence and dressing up that she remade her own life has fascinated me ever since I first read about her.  By the time she became Caraboo she had already lived in London as a nanny, enjoyed watching the exotic orthodox Jewish neighbours of the family she worked for, fallen pregnant and given her boy up to the Foundling Hospital (he died weeks later), she also enrolled herslf into The Magdalen Hospital, a centre for reformed prostitutes, and the pack of lies she told to get herself admitted are almost a precursor to Caraboo. She liked the outfits, wide brimmed hats and severe uniforms.

After that it seems she was off west, perhaps going home, she had begged pretending to be French before, and it seems to me that Caraboo is simply an extension of this pretence. It seems as if she was trapped in a lie, perhaps only intending to stay a night or two with the Worralls, she fell ill and enjoyed the game a little too much.

For the past four years I have been writing and rewriting a story based on hers. She was someone who never quite fitted in, whose personality was mutable, who could be whatever her audience wanted her to be. That feeling, that ability to be anything apart from someone who belongs, is something I know many people whatever their skin colour, can appreciate. However for a really good understanding of how it feels for a lot of people see Jackie Kay’s poem, In My Country.

Of course we can't be sure Mary Willcox was anything but sunburnt, but she may have had a black ancestor. It happened, there were more of us around than people imagine - remember all those fashionable pages in county houses in the eighteenth century? Not all of them were shipped back to the plantations when they outgrew their appeal. And some people chose to settle outside the conurbations, for instance, Joseph Emidy, one of Cornwall’s’ most renowned musicians of the late 18th and early 19th century and leader of the Truro Philharmonic Orchestra. (Look him up too!)

Princess Caraboo’s story is one of those too-weird-to-be-true ones that it is hard to improve on. I knew I had to write it when I was reminded of her after I wrote A Nest of Vipers, in 2008. That book was about a gang of confidence tricksters in early 18th century London. I was interviewed about my all time favourite con men and women of history.  Princess Caraboo, I said, and in the past few years I have rewritten the story in at least four different ways.


Posted by Catherine Johnson at 03:00

Oh, I love con artists! I found some great ones for my book on crime in Australia, Murray Beresford Roberts, who took on a lot of roles to make money, and the Tichborne Claimant. And it still happens even today, not just to bored rich women in the countryside. There have been literary hoaxes too, including one in recent years in Australia, where I live, that made fools of a lot of big names in the media. You'd think in the day of the Internet, when it's so easy to check things ut, that it would be harder to get away with, but people will believe what they want to.

I love this post! And it's all new to me - I didn't know the story of 'Princess Caraboo' at all (and I have some other names to look up now, too...). Fascinating that it wasn't a planned con with an obvious motive - like swindling or stealing from her hosts - but more of an opportunity to live a different life... Can't wait to read your book, Catherine!

Didn't she do well? What a character! Looking forward to the book...

Can really see the attraction of becoming someone else especially, in Mary's case, when people start to take care of you and other options are far less pleasant or comfortable.

Looing forward to meeting your Princess on the page soon.

What a story! I had vaguely heard of Princess Caraboo, but not the details... a wonderful post for a History Girls blog!

Fakers, forgers, can't get enough of them. Thanks for all the leads. Terrific post.

What a great character whom I'd never heard of before. And brilliantly told, Cat! Can't wait to read your longer version(s)!

A brilliant post and what an exotic name and exotic character, Can't wait for her to be realised in your book. Its such a marvellous story to run with. No wonder you've rewritten it in at least 4 different ways. Good luck in choosing the right voice.

I first saw her portrait in Bristol museum last September and thought what a fantastic premise for a novel her story would be - how very exciting that you've been doing it all along, I'll really look forward to it now!

I did enjoy this post, and look forward to reading what you've written about her, Catherine!

What a wonderful story. I really look forward to hearing more.