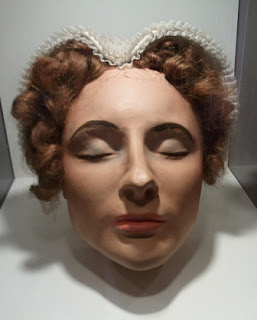 Growing up in Scotland I heard many tales of the adventures of our bewitching captured Queen. As her death mask shows, an ambassador’s description of her as “the most beautiful Queen in Europe” was not exaggerated. Mary’s striking good looks are apparent, even beyond the grave.
Novels and stories give varying accounts of her youth in the glittering palaces of France, and then in the turbulent grandeur of Scottish castles. Mary’s life was crammed with incident. As her father died when she was born, while still a baby she was crowned Queen of Scotland. Henry VIII of England, with ideas of merging the two kingdoms under his rule, wanted her wed to his son, Edward, so he tried to abduct her, laying waste to vast tracts of Scotland in the attempt. Separated from her mother when a young child, she was sent to France as a bride for the French Dauphin. Mary was married at 15, became Queen of France at 16, and was widowed at 17 – great trauma to suffer in a short space of time. In Scotland, her mother, who was acting as Regent on Mary’s behalf, was overthrown by a rebellion of the Scots Lords and subsequently died. A sense of duty plus loyalty to her mother and her native land, combined with hostility in France, and a promise of support by her duplicitous half-brother led Mary back to Scotland, where she had already sent emissaries in the hope that the people would accept her. This they did with great joy. But, in addition to leaving her a troubled country in constant war with a larger neighbour, her father also bequeathed his daughter never-ending strife by siring nine illegitimate sons, who, with family / clan connections, constantly sought advancement and control of the throne by treachery and violence.

Like her cousin, Elizabeth I of England, Mary was aware that mostly everyone: father, family, statesmen and subjects, would have preferred her to be male. Unlike Elizabeth she enjoyed a pampered early life, and was schooled in the role of Queen Consort. It was never anticipated that Mary would have sole governance of a country.

Early Queens needed a lot of grit and guile to survive. Although not so good with guile, Mary was strong on grit - even her implacable enemy, John Knox, admitted that. She stood up to Catherine de’ Medici, a seriously scary lady. She defied Queen Elizabeth, a most formidable foe.  Faced with an uprising by her Scottish nobles, Mary put on armour, stuck pistols in her belt, and rode out at the head of her army to chase the rebel Lords right over the Border. When seven months pregnant she was subjected to serious assault while her husband and co-conspirators murdered her secretary in front of her by stabbing him fifty-six times. During the next few days she managed to fool the plotters, plan her escape, and, during one night, rode many miles to safety. With the birth of her son she was aware that she was in even greater danger, as, if she was assassinated or imprisoned, the rebels could control the child, who was the undisputed legitimate heir.

While doing the research for my new book Spy for the Queen of Scots I began to realise why Mary was drawn to the rascally James Hepburn, Earl of Bothwell. He was the most notable of the few Lords who consistently supported the Scottish Crown. Unswervingly loyal, Bothwell mustered men and arms for Mary’s mother and the Queen herself when they were most in need. Crucially at that time Scotland had no standing army. For support in battle the monarch relied on the Clan chiefs, who fought privately with each other, and often changed allegiance to side with rebel factions.
Mary tried to find solutions to the many problems that beset Scotland at that time, including religious strife. When she arrived Scotland was predominantly Catholic and although she personally held to this, she passed laws awarding grants to the Reformed Church and creating stipends for ministers. She travelled by horseback over rough roads to visit numerous remote places and meet as many people as possible, and was generous to her hosts and to the poor of the towns she visited. It’s a tribute to Mary that she kept peace in her realm for the number of years she did.
In Spy for the Queen of Scots the character, Jenny (Ginette) is Mary’s closest friend, who shares her secrets, her triumphs and heartaches, and, at great risk, becomes a spy to try to protect the Queen against would-be assassins. As Jenny tries to find her own destiny and love, the reader experiences a Royal Court of passionate romances, magicians foretelling destiny and doom, ruthless murder and intrigue, battles, horrific revenge and plots by poisoners. Discovering fascinating facts and weaving them into a story made me realise that throughout her life, Mary, Queen of Scots was incredibly brave, with her kindness and personal loyalty inspiring admiration, even to this day. 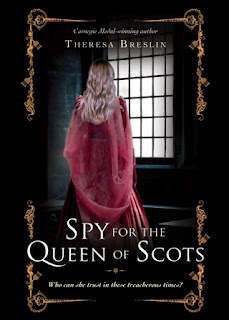 Theresa Breslin is doing 3 events at the EDINBURGH BOOK FESTIVAL this year. She will speak about her latest novel Spy for the Queen of Scots and about writing historical novels with fellow novelists - Elizabeth Laird on 12th August  &  Berlie Doherty on 27th August. An event about An Illustrated Treasury of Scottish Folk and Fairy Tales, illustrated by Kate Leiper is on 28th August.

Fascinating post, Theresa. I must admit I have never had a lot of time for this queen, but I haven't seen it from this angle. If anyone is interested, there's a series of posts on the background that made Mary and other monarchs what they were, over on Jordyn Redwood's medical-themed blog. Here's one link, to the Mary post: http://jordynredwood.blogspot.com.au/2012/07/histrionic-fit-33.html
The web site is largely aimed at writers who want to know how to hurt their heroes accurately.

Hi Theresa. What a fascinating book. I love history and am particularly interested in the Tudors and Mary Queen of Scots. It's one I'll be putting on my reading list for sure..
I write historical fiction and I'm hoping to have my novel finished later this year. Really enjoy following this blog. Thanks.

Lovely post , Theresa and the book looks great. Btw, I've just read A PLACE OF GREATER SAFETY by Hilary Mantel and in that, one of the women characters has Marie, as she calls her as a kind of heroine/icon. A picture of her execution figures quite large in the text. A very fascinating character.

This kind of book was the type of reading which usually boost my interest. There were great people written in the history yet remained mystery because of their unsolved and not revealed death cause. Literature use to give some theories and critics about some certain ideas which gives prior information about their end. I do believe that there were nice reason why they aren't taught in public.

Thanks for the links, Sue. I will definitely check it out. Good luck with the book Suzy and glad you like the Blog. Thanks for the book tip Adele, one to add to the list. I agree Lily that reading historical fiction boosts interest - as a teenager it certainly did mine.