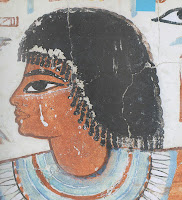 Today, on Day 69 of the Olympic torch relay as it passes just a few roads away from where I live, I thought of choosing a favourite historical figure in Chelsea. In the 16th century this was known as The  Village of Palaces. Thomas More built the magnificent Beaufort House with its orchards and gardens running down to the Thames and in 1536 Henry VIII built a manor house for Katherine Parr near the present  Cheyne Walk. But I’ve turned to a man who'll never be remembered for being more than a Scribe and Grain-accountant. But yet…

Nebamun’s tomb was built and decorated sometime between 1400 and 1390 BC. No surviving inscription tells us its exact location and no records tell us who the original painters were. We can only speculate about how a temple accountant came to have his tomb decorated by such skilled artists. But the scenes tell us more about people living 3400 years ago, than any official record or history book could. So… a short visual journey of the work that now resides in the British Museum.


The pigmented paints were combined with a binder like plant gum and the brushes were made from the fibrous branches of date palms.The paint was very fluid and applied in layers so that skin tone is revealed under transparent linen folds and patterns are painted over the fabric of the cushions. The seated girls at the banquet offer each other lotus flowers to smell, they wear floral wreaths, perfumed wax cones, lavish gold ear-rings and the ends of their wigs are delicately braided. 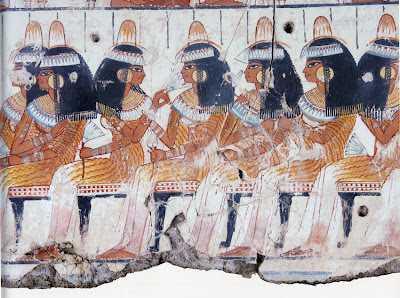 In an intimate group of musicians two girls are shown face forward. As in all Ancient Egyptian paintings they have their mouths closed but the three on the left were probably singing the words written above them in hieroglyphics. Their wigs are lighter and less formal than those of the guests so they are probably of a lower status. Each sits with their feet elegantly folded and apart from gold ear-rings and bracelets they also wear nail polish or something that glistens on their fingertips. And Cutex thought they had captured the market! 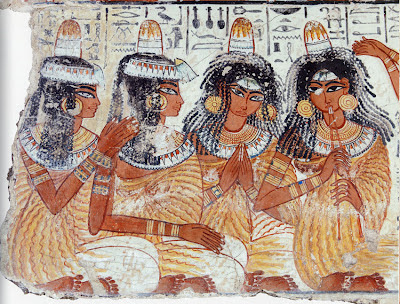 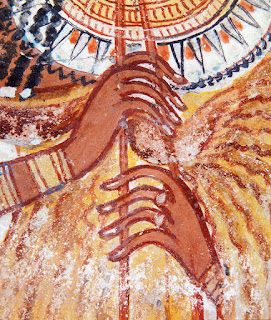 In the fowling scene, Nebamun is spearing tilapia fish, the luxuriant growth of the marsh represented by decorative papyrus and waterfowl and butterflies fill the air. Even the ginger cat with spiky whiskers attacks a duck as it leaps up from some bending papyrus stems and at the same time clutches a bird between both its front and back paws. 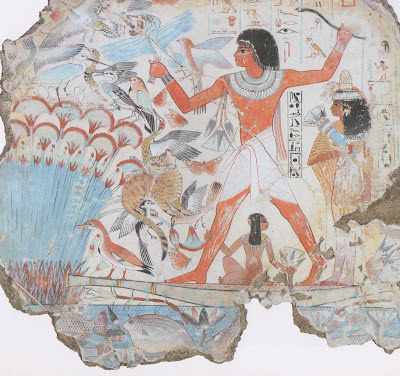 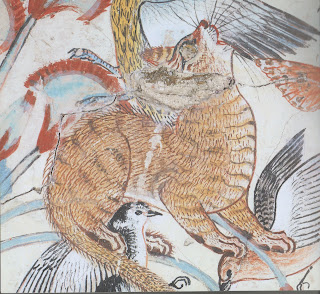 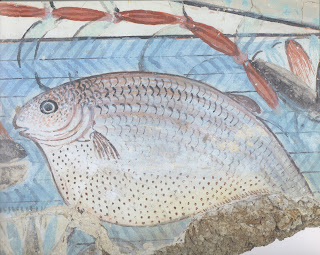 In the pastoral scenes of the gooseherd and the cowherd driving Nebamun’s flocks of geese and cattle towards him, we see soft stippled grey and rust feathers in the swirling mass of the geese and the impatient cowherd with his rope in the midst of his herd. 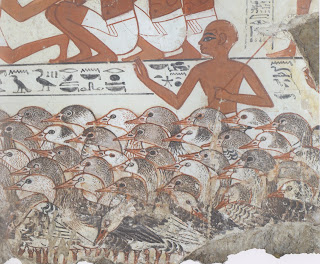 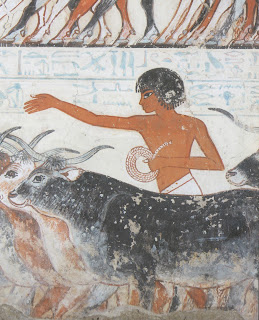 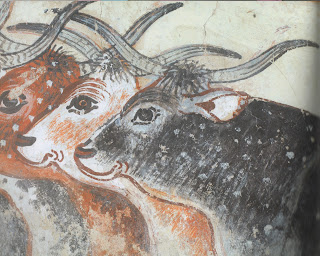 I haven’t even touched on feasts of food and beautiful gardens but Nebamun’s tomb paintings survive and give us an image of a man who enjoyed the luxuries of life 3400 years ago. But as well as this, we see the humanity of the artists themselves in the details and brushstrokes of the paintings.


www.diannehofmeyr.com
Eye of the Moon
Eye of the Sun
The Painted Tomb-Chapel of Nebamun by Richard Parkinson (British Museum Press)
Posted by Dianne Hofmeyr at 03:18

Oh, I do like this - what detail in the pictures.
Now the cat would have been a sacred cat (we were even more important back then! :-) ) so the fact that one appears suggests that he is was a very important personage indeed.

Beautiful! And isn't the cat delightfully playful? If you had a little money, ancient Egypt must have been a pleasant place to live. - such a laid-back lifestyle! And you could expect to go right on enjoying it into the afterlife.

How refreshingly lovely! Thanks, Diane!

Yes one does get a feel that everyone was having a marvellous time except for the peasants working out in the sun tilling the fields. Even the oxen look bovinely happy! Catdownunder you are obviously a sleek black cat to go by your pic. I had a heavy ginger with spiky whiskers as a child. But this one seems to have an even wilder nature... look at those claws... like a lynx almost.

(And those front-facing musicians - I've never seen that before!)

I wish Dianne - more like old and grey. Yes, he does look rather wild!

Such detail and loveliness. I'm suddenly wonder whether Nebamun ( or such people) planned visits to see the beauty of the tomb as it was created? They must have! How could they have resisted? A very different family day out, perhaps, complete with picnics or feasst nearby? Or was the inside of a tomb so sacred nobody should see it other than the makers? Can't imagine that, not pre-death. Surely you'd want to be able to imagine yourself there when you were in your last moments? Really beautiful - including the nail varnish.