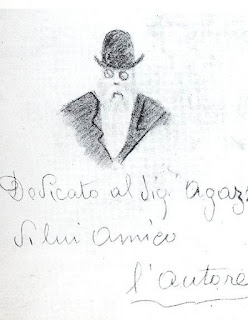 My FHF is Giuseppe Tassini, author of Curiosità Veneziane – Venetian Curiosities, originally published in 1863. I’ve blogged about him before. In fact, to be honest, I never stop mentioning him, but my reason for awarding him this slot on the History Girls – finally cementing my reputation as an incorrigible Tassini-bore – is that I see him as both an historical figure and a recorder of history.

Giuseppe Tassini was the Venetians’ Venetian, and a man living through a classic case of ‘interesting times’. He defied the outsiders’ concept of 19th-century as a dismal shadow of herself: ‘La Leggenda Nera’ so beloved of Byron and his morose, melodramatic ilk painted a town who had partied herself to death and now existed principally for the convenience of misery-tourists and the coiners of cheap metaphors. The ultimate insider, Tassini provided the antidote to this deadly slander. He showed a real and different Venice, choosing to give prominence in his writing to what was fascinating and great about his city, mingling the past and the present, and most importantly – in Curiosità Veneziane – presenting history in a way that makes it still possible to envision 1882, and even 1310, in  2012.

Here is one prism for viewing Tassini: his personal biography. Giuseppe Tassini was born in 1827, the son of a prosperous bourgeois family. His grandfather had been ambassador to ; his father was born there. His mother was the dghter of an upper-class Austrian colonel. The young Tassini, perhaps in the sway of the exotic near-past of his family, originally aspired to be a poet and lived very much for pleasure while technically studying for a law degree. His father’s death in 1858 appears to have brought on a new sobriety in the young man, who then graduated in jurisprudence. He inherited a comfortable fortune – liberating him from earning his living in law. Thereafter he devoted his life to the investigation of Venetian history, topography and legend, especially the whimsical, curious and neglected aspects that most appealed to him personally. He never married but he loved women and conviviality. He was a well-known figure in the restaurants of . He was a notable drinker. A sketch of him shows an ironic-looking face with a little goatee and thick glasses. He died on December 22nd, 1899 of an apoplectic fit caused by his culinary and bibulous excesses. His body was found at his home by the waiter from the Caffè dei Segretari who brought him his breakfast every morning. It appears that the man who brought to life was buried in a common grave, the site of which is no longer known. 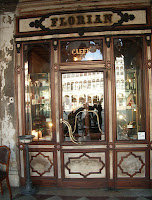 And here’s another prism for viewing the same man. Tassini was born in the second decade of the long Austrian Occupation of his city. He would have been 19 when ’s 1500-year-old island state was abruptly ended by the construction of the railway bridge that finally connected her to the mainland, an event of great psychological importance to the Venetians. It was also at this time that photography (initially in the form of daguerreotypes) arrived in to anchor her to reality in a new and possibly even more invasive way. Perhaps Tassini sat at Florian opposite John Ruskin, a frequent visitor in the late 1840s and early 50s as he recorded the city for his Stones of Venice. Tassini would have lamented, along with Ruskin, the dreadfully botched restorations at the Basilica and Ca d’Oro.

He would have been 21, at the height of his hot-blooded youth, when Daniele Manin led into revolt against her Hapsburg masters. The city endured a cruel siege for 16 months, finally capitulating when the Austrians cut off her fresh water and cholera raged. Tassini spent the next 17 years in a city under suspicion and an increasingly heavy Austrian grip. Tassini was 33 when northern threw off the Austrian yoke, 39 when herself was liberated in 1866. He must have taken part in that autumn’s plebiscite by which joined – by a vote of 642,000 to 69. A year later, he would have been wading though the 153 centimetres of one of ’s worst acqua altas.
He no doubt stood weeping in the of on March 22nd, 1868 when the remains of Daniele Manin, who died in exile in 1857, were brought back to for the saddest and most ornate funeral of the century. He would have seen the church and before their degradation and destruction, the ghastly work of the 1868 fire in the Cappella del Rosario at San Giovanni e Paolo. He would have watched women shimmering through ’s streets in the sinuous pleated silk dresses of Mariano Fortuny; maybe even the beautiful young actress who rejoiced in the name of Emma Grammatica. He was there when Wagner died in 1883, and when Robert Browning expired at the Ca’ Rezzonico a few years later. Tassini himself died just three years before the Campanile collapsed, but he lived to see the ancient city start to reinvent herself in the avant-garde of Art with the first Biennale in 1895.

I’ve recently been looking at photographs of this period, as I’ve written two novels set during Tassini’s lifetime, and in one of them he is a character. When I consult those atmospherically charged albumen prints of 19th-century , I find myself looking for Tassini’s face in the crowd. Would he have carried a notebook? Or would he have preferred to live the moment without translating it into words, putting it behind that pane of glass? Would he have rushed home to his desk and churned out fresh prose? Did he use one of the newfangled typewriters, or did he prefer to write by hand? I have stood outside his modest house in the Calle dei Specchieri, San Marco 635/634. (Since 1988, the first floor has carried a plaque commemorating Curiosità Veneziane and its author, ‘the passionate researcher of our traditions’.)

I imagine his desk against the window, the smells of local restaurants rising up to tempt him away from his work. I see him chasing his notes as a gust of the sirocco bears them away. I see him throwing up his hands at a bad paragraph and stomping down to the Caffè dei Segretari for a grappa-dirtied coffee. Yes, of course, Tassini is also my FHF because I find myself presuming to identify with him. I also know what it is to feel inspired by , and yet maddeningly distracted by her. I also know that sometimes the only way you can express your love for the city is to write about her. And I understand the task he faced, of condensing the fugitive city, crammed with incident and ornament, into something in words that people will want to keep reading: two kinds of work that are almost irreconcilable. 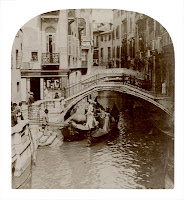 And here is a third prism for viewing Giuseppe Tassini. His most famous book also represents an interesting phenomenon of historiography. of all cities fuses ocular and historical fascination. I think Tassini responded to this stimulus. Instead of charting her history by chronology or theme, Tassini went for the gazetteer approach, and in this way effectively created a key to the mysterious city, accessible to anyone who speaks Italian (incredibly, it’s never been translated into English). In alphabetical order, Curiosità Veneziane recounts the stories of the streets and squares, bridges and palaces of the city. One can stand in the Campo of Sant’Agostin with Tassini in hand and learn where the church once stood, where the palazzo of Baiamonte Tiepolo was razed, where the column of infamy that vilified that would-be Dogicide once loomed. One has only to swing on one’s heel to discover the tiny alley where Daniele Manin was born. The connections are almost dizzying in their resonances. By allying place to past, Tassini chose to present history in such a way that it can be instantly accessed when and where it is wanted: by a person who stumbles into ‘The Little Alley of the Dirty Habits’ or ‘The Courtyard of the Dwarfs’ and wants to know who, where, what, why and when.

And here’s my last prism for viewing Tassini: as a writer of spellbinding charm and energy. He is as interested in hauntings and scandals as in political milestones. I think his criterion was: whatever brings the city alive. So he would write about facial moles as well as deadly conspiracies, and even on the same page. This sense of a duty to detain the attention and keep it alive is reflected in Tassini’s other books, about beards, glasses, vice, festivals, Veronica Franco. One of my favourites is Buildings of destroyed or turned to uses other than those for which they were originally destined. One of his frequent title words is ‘alcune’ – some. So there are books about Some Palaces and Old Buildings of Venice and Some of the most Sensational Death Sentences carried out under the Republic. In other words, Tassini does not seek to be exhaustive and so exhaust the attention of the reader. He seeks to be selective, and present what people most want to know in doses that are not only digestible but also highly palatable.

And this is why, in my opinion, Tassini may take his place on a blog for writers of historical fiction too.

Michelle Lovric’s website
Giuseppe Tassini is a character in Talina in the Tower, which was published on February 2nd, 2012, by Orion Children’s Books

Riveting, Michelle. Imagine what kind of Venetian guest post he'd write from beyond the grave!

Lovely post. You've made me do two things: a)blow the dust off my copy of Curiosita Veneziane, and b) long for a Venetian waiter to bring me breakfast.

I loved this post, but I do wish I read Italian - or that someone would translate that book!

I fervently second that wish.