A BLOW-OUT IN A BREWERY by Penny Dolan

I enjoy map-reading but I remember my way by the visual geography. I watch for the line of the road, the building on a turn, the look of the street, a shop front or a tree.

More than a year ago, I went down to London, got off a bus near an ex-publishers ex-office and turned in what was the right direction. Suddenly I couldn’t recognise the place. Where had the landmarks gone? 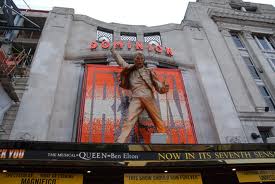 That whole familiar corner of Tottenham Court  Road was a vast building site.

Only the Dominion Theatre, with its gigantic “We Will Rock You” statue, offered a fixed point in that altered place.

Yet cities do change. What was there before the Dominion? As a writer, I like to search out the history of places and this is what I found.

Back in 1814, this area was part of the Parish of St Giles, known for its dreadful poverty, squalor and deprivation as the Rookeries. At the corner of Tottenham Court Road stood the Horse Shoe Brewery, part of the brewing empire of Sir Henry Meaux. With the poor quality of London water, this must have been a busy and welcome industry.

Inside the brewery was a vast vat: a wooden construction twenty-two feet high bound together by twenty-nine metal hoops. Constructed in 1785, at a cost £10,000, the vat was designed to hold 20,000 barrels of porter, a beer that needs months to mature. 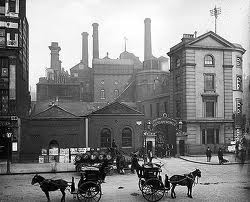 Almost thirty years later, in 1814, the gigantic vat was full of fermenting porter and the evening must have seemed an ordinary one.

However, at  6pm, one of the metal hoops snapped and the huge vat exploded, bringing down the others around it. The sound was so loud it was heard five miles away.

Within moments, more than twelve hundred thousand litres of beer smashed through the brick wall of the brewery.

The beer swept in a flood through the surrounding slum of Saint Giles in a violent wave. It damaged buildings, totally demolished two houses and a pub in Great Russell Street, The dreadful torrent caused injury and death, especially to young children and destroyed both homes and livelihoods. Of course, as this liquid was beer, some of the injuries were caused by people rushing out with pans, pots and kettles to gather up beer for themselves and being caught up in the flood.

The disaster immediately attracted huge interest. Some of the locals exhibited the bodies of the drowned, charging for a viewing. The crowd inside one house was so big that it broke the floorboards and dropped the sightseers down into the still-flooded cellar. Before long, the police stepped in and closed all the gruesome exhibits. The funerals were paid for by coins placed on coffins by parishioners.

The stench of the beer filled the district for many months. Eventually but not unsurprisingly, the Meaux Brewery Company was taken to court and the incident was judged an “Act of God”. The brewery gradually recovered and continued on the same site until its demolition in October 1922.


Did those who knew the Horse Shoe brewery grumble about their old missing landmark when the Dominion appeared?

As for the date of the famous 1814 London Beer Flood?
It was 17th October.
Cheers!

That is a truly gruesomely fascinating bit of history - cheers, indeed!

Good heavens! It sounds like something out of a book by Terry Pratchett! What a ghastly tragedy - and yet -

You really couldn't make it up, could you? Extraordinary!

The story is an odd one, isn't it? A mix between the dreadful when fact and when wearing a faux-Pratchett fiction hat (though not full of sky)almost amusing. It certainly draws pictures in the mind.

What a wonderful and sad story.

In a similar vein, 1919 saw a cataclysmic flood of molasses from a distillery in Boston (http://en.wikipedia.org/wiki/Boston_Molasses_Disaster).

Wow! I didn't know this. How absolutely fascinating, Penny. Thanks!