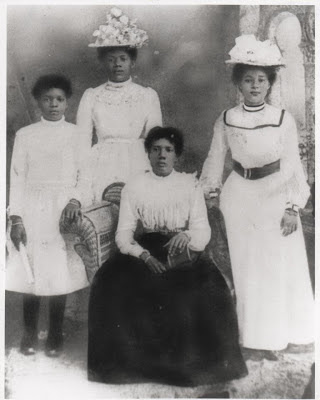 Any excuse really, to share this wonderful picture. It of my Great Grandmother, there in the middle and my Grandmother, the little hatless one.
Of course, it is Black History Month again. Although this year, my first school visit free October ever it does seem to vanish down the cracks of the national consciousness. Nothing on TV - oh there was a documentary on C5 about the Tuskegee Airmen- but nothing British. Or in the papers. And perhaps you might say, why do we need a separate stand alone month? Well of course Black History is all our history - even Garry Bushell's. But I do think it is important to say that Britain is made up of loads of different people and always has been. We are a tiny island, and people have always set sail and landed on these shores from all corners of the world. If you wanted any kind of purism, them really lets all move out and leave Britain to the Welsh speaking Welsh and the Cornish speaking Cornish.
And we hardly ever see pictures like this, Black people dressed as Victorians, or Georgians or Tudors. We always get the rags. (This inbalance in nice outfits was always one of my primary motors in writing historical fiction.) But of course there were pictures. Paintings, tapestries, photographs, even sculpture.
From a depiction of the Lord Mayor of London's procession in the twelfth century to the lovely Dido Belle painted by Zoffany in Kenwood we are there if you look. And for another example, next time you're in Trafalgar Square check out the reliefs at the base of Nelson's column and have a good look at some of  the sailors. 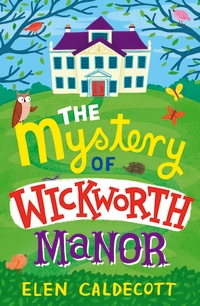 I think depiction, whether in art or writing is vital. It's not an imposition into history, it's an integral part of it. Just because Midsummer Murders doesn't feature any black faces doesn't mean we weren't - and aren't- there. And for some recommended reading for this month try Elen Caldecott's The Mystery of Wickworth Manor, inspired by the reality of black pages, who lived in stately homes all across Britain in the eighteenth century. Or perhaps, S.I. Martin's Jupiter Williams trilogy which starts in the school established for African royalty in eighteenth century Clapham- which did really, truly, exist.

There are loads of other books, including my own. And there are loads of histories that deserve remembering. What is important is finding ourselves in the past. And that says to kids now, you're alright, you're not 'other', you belong.

Posted by Catherine Johnson at 07:36

Yes, absolutely - WHY is this not being featured on TV? Thank you for the book recommendations, and that photo - lovely!

I meant to say also - how widely do schools do something to mark this month? Your final point, about kids knowing they're not 'other', is absolutely vital.

Since I've been out of the school loop - no visits at all this term - I have no idea.

Catherine, I read recently that there were black women (and doubtless men) in Roman York. They found this high-status burial of a woman they've called 'Ivory Bangle Lady' and she was African in origin! See this link: http://news.bbc.co.uk/1/hi/england/north_yorkshire/8538888.stm - and a reconstruction of her face!

So true. Why has no one done a documentary on Ignatius Sancho? His letters are a great window onto 18th century life. Full of drama, humour and personality. Born on a slave ship and successful enough to be a voter in 1774, accomplished composer...

Timely post and well said, Catherine. That is such a powerfully dignified family photograph.

Have recently come across Elen Caldecott's Wickworth Manor. The book's a great read: contemporary children off on a "get to know each other" residential trip as they start secondary school so very accessible - and with an interestingly awkward hero and heroine.

Now off to google Dido Belle.

Such a beautiful portrait, and what a fascinating story. I know Wickworth Manor but Jupiter Williams looks great-will have to get a copy!

There's some interesting stuff in the MShed museum, in Bristol, which is about the history of Bristol - if you're ever down this way.

Great post, Catherine! I have on my shelves a book about the wonderful collection of similar photographs of middle-class black people that was exhibited at the Paris 1900 Exposition Universelle by W.E.B. Dubois. It showed people who had stereotypes of 'savages' in their heads, that there were educated and professional black people. Of course, the so-called 'savages' had far more culture than the people who patronised them and stole their land ever suspected..

I agree, Catherine, as a sea-faring nation we have been a mix of races from the very start and it's important to celebrate that. As for portraits (and that is a lovely photo) there is a beautiful painting on the front of my copy of Olaudah Equiano's 'Interesting Narrative' - another former slave who ended up a 'gentleman'.