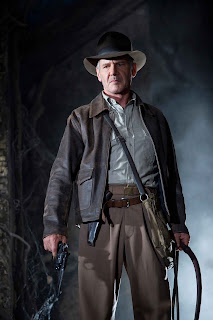 Why give Indiana Jones a leather jacket to wear in a hot climate? And why a whip? What makes the audience accept this as the proper attire for his character? The leather bullwhip is one of the oldest and most brutal of weapons in human history. Normally used to motivate cattle or slaves.  Yet the clothes he wears have become irrevocably linked to his character.

And here we have Ennis Del Mar :
Not yet twenty, but nonetheless compelling, not light or frivolous in disposition, appearance or manner, uncommonly quick reflexes… a high school drop-out country boy with no prospects, brought up to hard work and privation, rough-mannered, rough-spoken, inured to the stoic life. He has outgrown his faded denim cowboy shirt, his wrists stick out of the sleeves and the buttons…

Clear vision of character. It could have been written by Annie Proulx herself while she was mapping out her story for Brokeback Mountain, but in fact it’s from the screenplay adapted from her book.

In Fight Club, Tyler Durden (Brad Pitt) aggressive and destructive, creates a club where people can do the most primal and aggressive thing, where everything is unleashed. He wears a red leather jacket the colour of blood and loud shirts in direct contrast to his alter ego, played by Edward Norton dressed in grey…  quiet, unassuming, and obedient.

It’s the people, the characters in the stories, who hold our attention. The people are the emotional core of every story whether movie or book and it’s their story that moves us. In film, the costume designer must know 'who' a character is before they can design their costume, in the same way that a novelist must clothe his character. No matter the era that the story takes place in, the audience or reader is asked to believe that the character is real and that they had a life prior to the start of the story.

The V&A is currently showing ‘Hollywood Costume’. It’s a major costume exhibition, not based on the spectacle of artefacts and glittering glamour but on the contribution of costume designers to unforgettable story. Deborah Nadoolman Landis (costume designer from iconic movies like Raiders of the Lost Ark and An American Werewolf in London) has created an exhibition that brings to the fore the character seen from the inside out. She’s quoted as saying: ‘The best compliment for any costume designer is for the audience to love the film and not notice the clothes. Films require actors to disappear into the character and the audience must be invested in the outcome of every story. Perfect costume design is perfectly invisible.’

Wouldn’t that be the same for any novel whether historical or modern? Characters that seem right... as if the novelist has hardly had to think about them. They just are. It’s the characters in the stories, who hold our attention and who are of endless fascination to the reader or audience. We join our character at a single moment in their life. Everything about them must resonate true, including their clothes.

The exhibition is a ‘must’ for anyone interested in story whether historical or modern. Landis has dissected character in screenplay and carries it through to dialogue between directors (Martin Scorsese, Mike Nichols, Tim Burton) and costume designers (Edith Head, Ann Roth and many others) and the actors themselves with Meryl Streep and Robert de Nero in ‘conversation’ on characters they’ve played and costumes they’ve worn.

Who could forget the cream suits and hats, worn by Isak Dinesen in Out of Africa or that shot of Streep in the cloak in the French Lieutenant’s Woman. All this is brought alive in the exhibition with film clips, swatches of fabric (that chartreuse green worn by Tippi Hedren in The Birds) and with brilliantly planned, ever-changing montages projected on digital tables. Instead of being a viewer you feel you are part of the discussion and decision-making process. 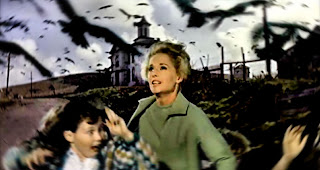 The final room is a cavalcade of iconic costume but even here brought alive by projections of the actors’ faces above every costume.

Wait for this exhibition to settle a bit. At the moment it’s very booked up and full. But go with a notebook… no camera’s allowed… and soak it all in. I went twice in one week and for me one of the most interesting of costumes was one that could almost have been overlooked... it wasn’t Holly Golightly's black Givenchy dress from Breakfast at Tiffany's, or the green gown worn by Keira Knightley as Cecilia Tallis in Atonement, but a medieval wedding dress made of wool spiderwebs seeded not with pearls but the nacre of minute turban shells and train hung with bleached pumpkin pips (worn by Vanessa Redgrave in Camelot – thank you to Sue Bursztynski for directing me to this image... note the pumpkin pips) 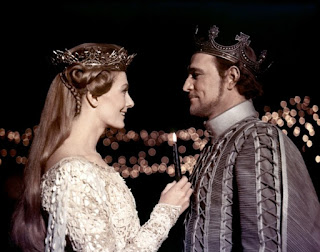 Thanks for describing the exhibition so well - it's just the sort of thing I hope they'll be bringing up to the new V&A in Dundee but that doesn't open until 2015! (I'll put a link here in case anyone is interested in finding out about this exciting project: http://vandaatdundee.com/your-future/ )

'Inured to the stoic life.' Beautiful. So much more evocative than saying accustomed to hardship. Lovely piece.

Must go to the exhibition - you have convinced me and before I was dubious. Great blog, Dianne!

Perhaps the V&A will take note of your idea Joan as I sent the blog on to their Press Dept.
From a historical viewpoint the Exhibition is interesting because in different eras' costumes of famous people like Elizabeth I and Cleopatra have been interpreted in different ways eg in art deco style.

Living way out of London, I'm really enjoying this delicious description of the V&A's latest.

Had heard nothing about the Dundee project at all, Joan, so will watch out for more news of it on your own blog.

I'm so jealous! Why do I have to be living on the other side of the world? I think that wedding dress you mention may be the one Vanessa Redgrave wore in Camelot? It's fascinating what costumers can do. In science fiction fandom, the costumers make clothes you could wear in the street, but people working for stage and screen have to work within a budget and can get away with more. I remember a production of Shakespeare's Pericles in which the jewellery was made of gold painted bottle caps and when the costumes for The Six Wives of Henry VIII were on display here in Melbourne I noticed that Henry's hat was decorated with painted nuts and bolts!

Thank you Sue! How brilliant! You're so right. I'd forgotten who wore the dress and didn't have time to go back to the exhibition. But now I"ve found an image and am going to add it to the blog. What a beautiful woman Vanessa Redgrave was and still is. Are you a costume designer as well as a writer?

No, I'm just a science fiction fan. :-) I can't use a sewing machine, so my costumes for conventions were all handmade and after seeing what stage and screen costumers do, I decided I would get more satisfaction from making the best costume I could while spending only a few dollars. I admire the really good costume makers, but I'd rather write than fiddle around with elaborate costumes. :-) I remember reading about that wedding dress, years ago. The costumes and sets for that movie were designed by John Truscott, a fellow Aussie.

PS The pic of me that goes with my comments shows me wearing a very basic costume I made for a book signing. I had a veil with it, but that didn't work. The book I was signing was my medieval fantasy, hence the style. Told you I can't use a machine!

Great post, sounds like a fabulous exhibit and I'd love to see it! Costumes are such a rich part of the movies... Any idea how long it will be at the V&A? Perhaps I can catch on my next trip to London...

Lots of time still. 27th January 2013. best to go earlier in the morning on a Monday or Tuesday. Gets very crowded over the week-ends.