Princess Rhianna Pendragon would like to invite you to breakfast at Camelot Castle to launch her second adventure Lance of Truth. 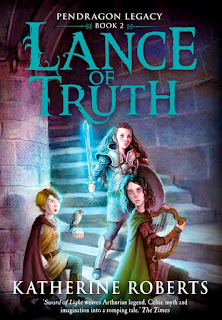 Regretfully, King Arthur will not be attending this year, since Prince Mordred killed him at the Battle of Camlann and Merlin whisked his body away to Avalon for safe keeping. But you might see the king's ghost, which sometimes appears at Camelot in the presence of his sword Excalibur, which Rhianna won back from the Lady of the Lake in her first adventure Sword of Light. We’re also hoping Queen Guinevere might put in an appearance later, if she manages to escape from Mordred’s dark tower, where he is keeping her hostage in a bid to get his hands on Excalibur - sorry, that should be hand (King Arthur chopped the other one off as they fought).

Welcome to the Great Hall of Camelot, where there’s plenty of room for everyone at the Round Table, since it is a magical table and can seat as many knights and their guests as required. 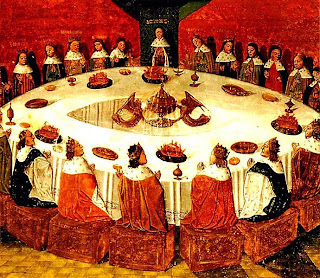 Weapons are not normally allowed at the Round Table when the knights meet. But for this special breakfast, you may bring a small knife or dagger to cut up your food. No forks or spoons, please. Princess Rhianna will probably use Excalibur to slice her food, but do not be alarmed – she's not allowed to blood her blade if she wants to take the sword back to Avalon and complete her quest.

Silver platters will be provided for royalty, and trenchers of stale bread for everyone else (please do not eat your plate before breakfast is served, since you will get crumbs on the table, which may interfere with its magic.)

Fish
Our fish comes fresh from Lady Nimue’s lake, so if it has arms and green hair you’re advised to throw it back.
Meat
Wild boar and venison from the king’s lands.
Hare or rabbit pie (some of the squires can’t tell the difference).
Spicy sausages.
Fowl
Pigeon, quail, duck, a swan if we can catch one, and that old favourite, blackbird pie. 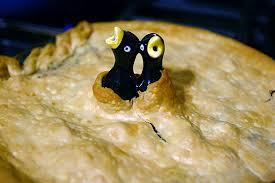 For vegetarians
Selection of soft fruit from our orchards.
Porridge sweetened with honey from our hives.
Onions and cheese made from the milk of our prize flock of sheep.

To drink
A selection of Camelot ales
Dandelion wine
Elderflower cordial for the children.

Entertainment will be provided by Prince Elphin of Avalon, who (it is rumoured) has six fingers on each hand for making unearthly music. He might also sing a ballad.


Sing a song of sixpence
A pocket full of rye.
Four and twenty blackbirds
Baked in a pie

When the pie was opened,
The birds began to sing;
Wasn't that a dainty dish,
To set before the king?

The king was in his counting house Avalon
Counting out his money;awaiting resurrection;
The queen was in the parlourMordred's tower,
Eating craving bread and honey.

The maid was in the garden,
Hanging out the clothes;
When down came a blackbird merlin
And pecked off her nose.

Virtual book signing will follow the breakfast, after which Rhianna Pendragon will leave for her next engagement, riding her fairy horse Alba. 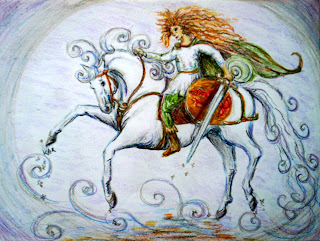 All breakfasters will receive a souvenir grail, also supplied as a drinking vessel for the event – if yours appears to contain anything other than what you put into it, please notify the organisers at once, since the Grail of Stars (one of the four magical Lights Rhianna needs to bring her father back from the dead) vanished a few years back, and Arthur’s knights have been searching for it ever since.

Before you leave, please eat your plate to save on washing up, and take extra care when crossing the drawbridge on your way out. Camelot Castle accepts no responsibility for guests who fall into the moat while drunk or suffering from indigestion.

We hope you enjoyed your Dark Age Breakfast!

The Dark Age Breakfast is a virtual launch party for the Pendragon Legacy series, published October 1st 2012 by Templar.

More about the series at www.katherineroberts.co.uk
Posted by Katherine Roberts at 02:00

Sorry to be late to the feast! I'll have the vegetarian option, though I might find it hard eating porridge with a dagger. Am wondering how to transfer the signature from my proof to my hardback copy!

Congratulations for all your work preparing our feast, Katherine, and on Rhianna's new quest.

I presume riding a fairy horse isn't as bumpy as the real thing? Though you'd probably need to be a good & noble horsewoman to deserve one?

Great feast... nothing like a good ale and strong cheese on a trencher! Thank you!

Thanks so much - loving my souvenir grail!

Thank you, dark age break-feasters!
(Note: there is plenty of food, so those visiting from other countries can take their breakfast whenever they are ready.)

Mary, you use your fingers for the porridge (there is a finger bowl provided, naturally) and keep the dagger for scooping out the honey. And that signature might just magically have to appear on the hardcover next time I see you...

Penny, fairy horses are smooth to ride but rather tricky, since they have a habit of 'misting' from under you. Rhianna fell off a lot when she was learning, but can now speak telepathically to her mare Alba so that helps.