I love downloading free books from the Internet.  My ipad is filling up with all sorts of texts I've always meant to read.  The trouble is that, as with my TV recorder, too often I expect the machine to finish the job for me, and to read the books itself. My virtual bookshelf is becoming just as shaming as my real one.  The other day, on an unexpected train journey, and feeling appropriately low in spirits, I finally got round to having a look at Robert Burton's Anatomy of Melacholy - the runaway best seller of the early seventeenth century. 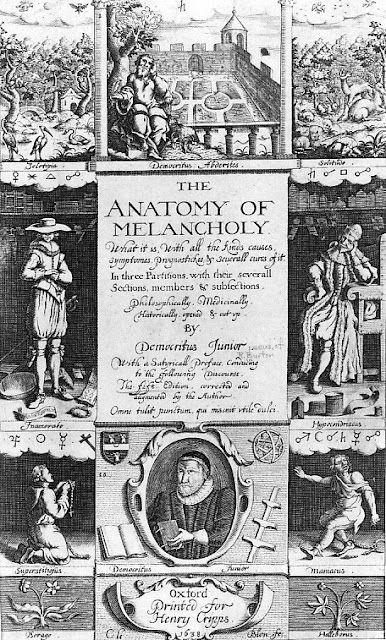 ANATOMY OF MELANCHOLY:
What it is, with all the kinds, causes, symptoms, prognostics, and several cures of it (1638)


I wish I had read it before.  It was a revelation - not at all the dreary tome I was expecting - and far more than an analysis of the nature, causes and treatment of depression.  On that subject it is astonishingly 'modern', especially in its recommendations about diet and exercise, which could have come from a twenty-first century magazine or website (were it not for the profusion of Latin quotations).

And in Burton's day, as now, depression was everywhere.

My purpose and endeavour is, in the following discourse to anatomise this humour of melancholy, through all its parts and species, as it is an habit, or an ordinary disease, and that philosophically, medicinally, to show the causes, symptoms, and  several cures of it, that it may be the better avoided... I know not wherein to do a more general service, and spend my time better, than to prescribe means how to prevent and cure so universal a malady, an epidemical disease, that so often, so much crucifies the body and mind.


Although most of the book is about melancholy, there are hundreds of reflections on other things, and time after time one stumbles across startling parallels with the present day.  Here, for example is Burton's prescription for rescuing an economy.  As usual, he brings in multiple classical examples:

They had wont in former times to disburden themselves, by sending out colonies, or by wars, as those old Romans; or by employing them at home about some public buildings, as bridges, roadways, for which those Romans were famous in this island; as Augustus Caesar did in Rome, the Spaniards in their Indian mines, as at Potosi in Peru, where some 30,000 men are still at work, 6000 furnaces ever boiling, &c. aqueducts, bridges, havens, those stupend works of Trajan, Claudius, at Ostium, Dioclesiani Therma, Fucinus Lacus, that Piraeum in Athens, made by Themistocles, ampitheatrums of curious marble, as at Verona, Civitas Philippi, and Heraclea in Thrace, those Appian and Flaminian ways, prodigious works all may witness; and rather than they should be idle [the pharaohs tasked] their subjects to build unnecessary pyramids, obelisks, abyrinths, channels, lakes, gigantic works all, to divert them from rebellion, riot, drinkenness...

Has George Osborne read this book? Perhaps he should.

Burton is keen to distinguish melancholy from madness - which is, nevertheless, all around us:

Fabatus, an Italian, holds seafaring men all mad; "the ship is mad, for it never stands still; the mariners are mad, to expose themselves to such imminent dangers: the waters are raging mad, in perpetual motion: the winds are as mad as the rest, they know not whence they come, whither they would go: and those men are maddest of all that go to sea; for one fool at home, they find forty abroad." He was a madman that said it, and thou peradventure as mad to read it.  Felix Platerus is of opinion all alchemists are mad, out of their wits; Atheneus saith as much of fiddlers... in comes music at one ear, out goes wit at another. Proud and vainglorious persons are certainly mad; and so are lascivious; I can feel their pulses beat hither; horn-mad some of them, to let others lie with their wives, and wink at it.

When it comes to the book world, it's almost comic how closely Burton's anxiety about the dumbing-down effect of the spread of reading mirrors twenty-first century alarm at the rise of the Internet:

Heretofore learning was graced by judicious scholars, but now noble sciences are vilified by base and illiterate scribblers," that either write for vainglory, need, to get money, or as Parasites to flatter and collogue with some great men... Amongst so many thousand authors you shall scarce find one, by reading of whom you shall be any whit better.

Burton rails against the populist marketeering of publishers:


It is a kind of policy in these days, to prefix a fantastical title to a book which is to be sold; for, as larks come down to a day-net, many vain readers will tarry and stand gazing like silly passengers at an antic picture in a painter's shop, that will not look at a judicious piece...It was not mine intent to prostitute my muse in English, or to divulge secreta Minervae, but to have exposed this more contract in Latin, if I could have got it printed. Any scurrile pamphlet is welcome to our mercenary stationers in English; they print all...but in Latin they will not deal.

And, while sharing the pains of today's writers (not enough time to check the proofs properly / anticipation of harsh criticism) he has wise words for us all on how to deal with readers and critics alike:

Our writings are as so many dishes, our readers guests, our books like beauty, that which one admires another rejects; so are we approved as men's fancies are inclined.

I resolve, if you like not my writing, go read something else.


In a melancholy world it's rather cheering to find that, for writers at least, little has changed over the past 400 years.  Burton's book turned out to be an antidote to my own gloom in an unexpected way. 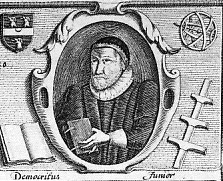 Isn't it wonderful what you can find on line? Especially love tat bit about publishers giving books "fantastical" titles to sell them! Or in our time, lurid covers.:-)

I agree with you about downloading more books than you can read. You just say,"ooh, I'll have that and this and this.." and next thing you know your virtual shelves are groaning! I am still reading my way t through about fifty free books, never mind the ones I paid for! But Project Gutenberg is wonderful and irresistible.

Have only just begun on my download shelves so am now worrying if they'll be in the same state as the real world shelves.

"I'll have that" can be a worrying book mantra, Sue, but at least we can now combat Melancholy and the publishing blues. Thank you, Eleanor.

So grateful for this, Ellie. It's a book I've wanted to read and never have and have read SO MANY reference to it...wonderful to have it here. And of course the bits about writing were terrific. Plus ca change eh? With no accent, sorry!

Fascinating blog.
I think modern-day Tories have taken the point about workfare, though... maybe better have the rebellion quick before they start comissioning pyramids.