I wonder how much black history is hiding in plain sight in the archives? I’m taking up Louise’s theme from yesterday here and Catherine Johnson's from earlier in the month, it’s one I hope we hear more of in the future, and that is how long, various and multi-faceted black history is in England. Naturally when we talk about race in the 18th century attention focusses on the horrors of the slave trade and the efforts of abolitionists, black and white, to bring it to an end. There is enough to talk about there to keep us going for at least another century, of particular interest to me at the moment is how culpable white abolitionists were in portraying Africans as poor victims, and failing to recruit black voices to campaign alongside them. I'm glad there were black writers who did not need recruiting to make their voices heard such as the first recorded black voter, Ignatius Sancho, and abolitionist campaigners Olaudah Equiano and Ottobah Cugoano all of whom wrote best-selling books. Their activism isn’t well enough known though and often our thinking tends to be wrongly polarized between the oppressed slaves and the white masters. While I’m not for a second minimising the horrors of slavery, it’s just as important to remember there were black people at every level in English society in the 18th century. It’s surprising how many people think there just wasn’t a black community in England before the 20th century. It’s just not true. We’ve been a country of immigration since year dot and people of all races have been coming here, settling down and getting on with life ever since. 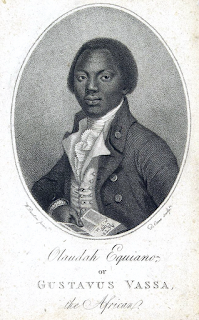 That said, the experience of the mass of the black population of England is largely hidden from us. Just as we see the experience of the vast proportion of the English in general only through the observations of the book and letter reading classes, so outside of those writers mentioned above, we tend to get only hints of the black community. Nevertheless it is enough to know there was a strong black community here even as the slave trade boomed. For instance when two black men were confined to Bridewell for begging in 1773 some three hundred black people visited them to offer support; there were clubs to support fellow blacks who were without a place, and after the Somerset verdict in 1772 the black community held a subscription ball to celebrate. That is not to say the black community was not well integrated too and that leads me back to my first question about how much black history is hidden in plain sight. Unless someone mentioned in a text is specifically referred to as black we tend to assume they are white and that is simply not always the case.

I’ve been ferreting around in the Old Bailey records. You can learn a great deal about 18th century London by reading them, and there we see black Britons as prosecutors, witnesses and prosecuted. It is clear that the evidence of a black man or woman was as good as anyone else's, and there are plenty of cases where white criminals are transported or executed on the evidence of black witnesses. Sometimes a witness is asked if he is a Christian. One man who said he had been going to church for four years testified, another called Guardaloup who helped chase down a thief did not, because he said he knew nothing of religion. Now, I found those cases, and those of Isaac George, the messenger whose money was stolen after he went to a dance, Thomas Guy, a black highwayman who complained there were a thousand black men in London so why were they picking on him, and William Smith who was acquitted of pick-pocketing because of the ‘people of quality’ ready to testify to his character, because they are all referred to as black in the transcripts, but we should not assume that every person of colour who came up before the court was so designated.

For instance I have been reading about the short and very criminal life of Ann Duck. She was the daughter of a black man and a white woman. Her father taught the use of the small sword to gentleman and was acknowledged a ‘very good master.’ He provided for a good education for Ann, but after his death she began to run wild and ended up in 1743 being repeatedly tried for violent theft.  In fact she was up before the court five times and in only one trial is the fact she is black mentioned. In her account of her crimes given before her execution she herself mentions it only once:

...while the Punch was making, he began to be very rude and troublesome; particularly to Ann Barefoot; (for he seem'd to have no liking to me, he swore he did not like my Face, being of a tawny Complexion) upon which Barefoot severely reprimanded him, and ask'd him what he meant by it? What, did he take them to be Women of the Town? If you do, you are much mistaken, for we are both married Women, and have two very good Husbands (and God knows neither of us were ever married, but we have had many that we call'd Husbands, God forgive us!) Whereupon he began to be a little more civil, and we told him at the same time, it was a Thing they never did in their Lives, go into a House with a strange Man, and that he may take it as a particular Favour.

They got him drunk and stole twenty shillings from him, by the way.

I wish the Ordinary of Newgate had asked her about her father’s career. Still, looking through those trials it is clear that there was nothing exotic or peculiar about seeing black faces on the streets of London, or in the inns or taverns, lodging houses or grand palaces or the courts. Most of the stories of black Britons have disappeared into time along with those of their friends and neighbours, but that doesn’t mean they are not there.

You can find the accounts of the trials of Ann Duck by searching for her name at www.oldbaileyonline.org and, like Louise I recommend Black London - Life Before Emancipation by Gretchen Holbrook Gerzina.

Fascinating and eye-opening post. I'd never thought of using the Bailey records for race research - as you say, it's so rarely mentioned - but the very fact it IS hardly mentioned tells its own story. Attitudes to race really do seem to have changed, and not always for the better.

I do agree it skews things to concentrate so much on slavery and abolition, but I'm also beginning to wonder from all this if the relationship between slavery and racism is different from what I've supposed. Rather than racism leading to slavery, it could be the other way round - which is why it thrived most in countries (like the US and Belgian Congo, for instance) where it was in the selfish economic interest of white people to dehumanise those of colour. A kind of twisted moral justification of 'it's all right for me to exploit these creatures because they're a lower species...'

Urrrgh. To be honest, I don't know which is worse.

Fascinating post! I have bookmarked the Old bailey site for future research. By the way, it's .org, not .com - that takes you to a site that says the domain name is for sale! :-)

How long HAS there been a black population in England? I did wonder when the BBC Robin Hood showed a black abbess and a black Friar Tuck... :-)

Oops! I must learn to check the links more carefully. I've updated that. Sue, there were actually Africans here before there were English! There was a division of Moors defending Hadrian's Wall and one Ethiopian soldier made it into the record for irritating Septimus Severus nr Carlisle in the 2nd century (see Peter Fryer - Staying Power).
Louise, I think you may be spot on. The anti-abolition pamphlets are all about about presenting Africans as child-like and unable to look after themselves without the care of their kind, fatherly owner. Makes your blood run cold.

And as I commented on AL Berridge's post, below, a high-status black lady was buried in Roman York.

Lovely post, Imogen, and I adore the portrait of Dido and Elizabeth - they look to be such good friends!

Great post Imogen. I love Elizabeth the First being upset that London is full of negroes - in the sixteenth century!
My favourite book on the subject is Staying Power by Peter Fryer. It covers the history of Black Britons from Roman times to present day and is a thoroughly wonderful read x

I love that portrait of Dido and Elizabeth. Thank you for another fascinating post.

THanks folks, I love Staying Power too, Catherine. Agree it's a great read. And Katherine, someone really needs to write a book about that lady. Is it on your to do list? ;-)

Not at the moment, Imogen! But I agree, someone should!

Along with the tombstone to "Victoris nationis Maurum" - Victor from the nation of the Moors - up at one of the museums along Hadrian's Wall, there's also one set up by the merchant Barates for Regina, his freedwoman then wife. He was from Palmyra in Syria. I saw those in 1988 and was sufficiently caught by them to write a poem. Still have it somewhere.