This blog is for any patron of the arts, well-wisher, vecchio amante danaroso letterario ( ‘literary Sugardaddy’) or rich uncle wishing to curry favour with his favourite niece or anyone else waiting for some hints about what this particular History Girl would like in her Christmas stocking ….


Just a couple of books, honestly, such as

Le Arti che vanno per via nella città di Venezia – 1753
I’d translate this as Street Trades of the City of Venice, but really there is an element of art to it all, in the same sense that herself may be described as a beautiful working puppet theatre on a grand scale. Le Arte is a collection of 60 etchings designed by the artist Gaetano Gherardo Zompini. Below each lively illustration is a rhymed triplet by Don Questini, parish priest of Santa Maria Mater Domini.

These depictions of the working class in are lovely because they show professions that speak of the city’s picturesque past. I love the combinations of the trades such as
Conza Lavezzi (Tinker and Cat Gelder);
Inchiostro (Ink and Rat Poison Seller);
And the glimpses into Venetian appetites provided by specialists like the
Caraguoi (Snail Vendor);
Dolce de Vedeletto (Blood Pudding Seller);
Frittole (Fritter Maker);
One can see the ways Venetians enjoyed themselves in these professions:
Fitta Palchi (Keeper of Theatre Boxes);
d'Orbi (Blind Musicians);
Mondo Novo (Peep Box Operator).
And of sadly lost jobs like the
Marmotina (Marmot Keeper);
Metti Massere (Maidservants' Agent)
This is a book to give pleasure for years … and OMI in just happen to have a lovely facsimile edition for just 1900 euros

If it’s not too much to ask, I’d also like a work by Gaultier de Coste, Seigneur de la Calprenède, called Hymen’s Præludia: or Love’s Master-Piece. Being that So-much-Admired Romance, intituled, Cleopatra. In Twelve Parts. Written originally in the French, and now rendered into English, by Robert Loveday [and John Coles, James Webb and John Davies].

This dark, speckled jewel may be had for just 2000 of your finest English pounds from Blackwell’s Rare Books, a site well worth a wistful pre-Christmas browse.

I’d be overjoyed to find in my stocking a copy of Automata, by Alfred Chapuis, Edmond Droz and Alec Reid, Editions du Griffon, 1958. My next book, The Fate in the Box, is set in a fantasy of 1783, when a shadowy slave army of Winder-Uppers is forced to keep the mechanical devices of the city ticking, and in researching it, I discovered many outrageous and hilarious devices that were fascinating the public before batteries were invented.

There’s a particularly fine version of Automata at Classic Rare Books, bound in full crimson morocco gilt, with crimson watered silk endpapers, and all edges gilt, with 18 full-page colour plates, and 488 monochrome illustrations and diagrams within the text. 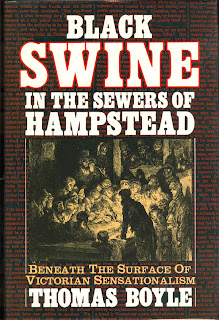 I could not help being attracted to Thomas Boyle’s Black Swine in the Sewers of Hampstead, (Hodder & Stoughton) a relative youngster with a 1990 publications date, and the very reasonable price of £20 at RFG Hollett & Son.

I’d love all three volumes of Wilkie Collins’s lesser-known masterpiece, Armadale (1866)about a bigamous, murderous, heartless opium-addicted redhead, Lydia Gwilt, and her many male victims, all of whom seem to sleepwalk into her cruel clutches, while the reader cries out ‘No! No! Just look at those serpentine coils of blood-red hair! Can't you see she's evil on legs?’ Haven’t seen an edition anywhere yet, outside of the London Library, but still hoping.

And, failing that, an amusing little volume by ‘Unknown’ from 1848: The Sinks of London Laid Open - A Pocket Companion for the Uninitiated, to Which is Added a Modern Flash Dictionary Containing all the Cant Words, Slang Terms, and Flash Phrases Now in Vogue, with a List of the Sixty Orders of Prime Coves.

Now if someone really wanted to push the boat out, how about an immensely covetable first edition of John Donne, published just two years after his death, with elegies and Juvenilia?

There’s just a bit of rebinding and spot of worm damage to the lower cover. I don’t want to tell you the price, because the value is beyond rubies for those of us whose adolescent passion for Donne has never slackened. Visit it anyway, just to imagine, at Peter Harrington.

Now, the bibliophile’s equivalent of Terry’s Chocolate Orange for the heel of the stocking? 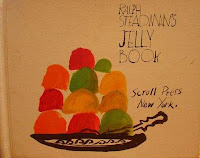 For me, it would be The Jelly Book by Ralph Steadman (not to be confused with Don't Put Your Finger in the Jelly, Nelly! by Nick Sharratt). No, this is a proper History Girls’ jelly book, dealing with the natural and social history of jelly, explaining how it grows on trees, and is picked by kind people. At factories the good jelly is sorted from the bad (the bad jelly is use to stuff pillows and mattresses). Thereafter jelly’s progress up the social scale is pretty triumphant, all the way to the Mayor’s table, carried there between the horns of a cow who provides fresh cream on the spot. As I remember, the mayor’s favourite flavour is lemon …

There’s an American edition of The Jelly Book available at Eastman Books in for around £30 including p&p.

I asked my husband to put Merrie P. Wycoff's latest historical fiction titled, "Shadow of the Sun." My sister read it and said she couldn't put it down. Now, after going through your post, it looks like a few more to add to my list. Thank you for the great recommendations.

A delicious post as always Michelle.Thank you for the enlightening introduction to early professions... Tinker and Cat Gelder though I shudder at. All I think think of are those hot tongs straight out of the fire. And as to Ink and Poison Seller... seems wonderfully fitting. Perhaps those little glass phials of dark, murky inks that I buy in paper shops in Venice are in fact poison. I must remember not to suck the nib of my pen.

I've always been partial to a little for-edge painting...and yes, I am tempted to check every rare book I find just in case it reveals a forgotten treasure!