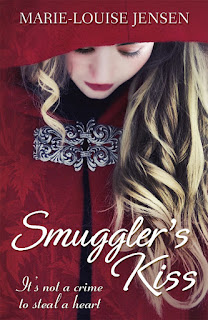 I had a new book published on March 7th! No prizes for guessing what it's about.
Smugglers were so much fun to research. I began with my memory of the Rudyard Kipling poem A Smuggler's Song, which you can read here: http://www.sheerpoetry.co.uk/junior/literacy-hour/year-5/longer-classic-poetry, I worked my way through various novels, including Moonfleet by John Mead Faulkner and watched an old BBC series called Smuggler which reduced my sons to tears of laughter it was so dated. I enjoyed it nonetheless.
There were also plenty of non-fiction books to read about smuggling in various parts of the country. The problem for me with a lot of these was that they described the practice without clear timelines. It's no good writing about the smuggling of tea in 1720, when my book is set, because duty wasn't put on tea until 1724 Also I needed to be very clear about which laws were in force when my tale was set. Was smuggling a capital offence and when did that come into force? When was the law governing signalling ships at sea passed? When was the coastguard brought into existence?
And many quite surprising details aren't known. What uniform did revenue officers wear? What did the pennant look like that they flew from their ships? Not recorded. There are only theories.
And of course the history of the smuggling activities themselves are shrouded in a certain amount of secrecy. It was a clandestine trade carried on mainly on wild, dark winter nights with nothing incriminating written down. Fascinating stuff!
Enough has emerged from trials and confessions to paint a picture, though who can say how reliable this information is? And a great many stories have become local lore and legend, but much of this is even more unreliable.
One book, for example, devotes a whole chapter to debunking the myth that smugglers used long tunnels, pointing out the resources such tunnels would have required to build. And where did these intrepid engineers dump all the earth they supposedly dug out? Besides, no significant tunnels have ever been found. The truth is that in the early years of the 18th century especially, smugglers worked quite openly, sometimes even landing cargo in ports in broad daylight. The overstretched revenue officers simply didn't have the resources or manpower to prevent them. And when they began to tighten up a little, there were still so many hundreds of miles of wild, inaccessible coast to patrol. The smugglers, or free traders, still had plenty of options.
Posted by Marie-Louise Jensen at 01:00

Interesting stuff - and thank you for the link to the Kipling poem - the man could surely turn a phrase!

My mother used to read that poem to me when I was small, and I love reading it to my children now - especially when it's dark outside - the rhythms are so mesmeric and charged.

HUGE luck with the book, Marie-Louise!

Lovely post - and those smugglers' tunnels! Folklore seems obsessed with tunnels, for some reason. My Dad often used to say that any building that had stood for more than ten years was reputed to have a 'secret tunnel' leading from it to any nearby castle, priory, abbey, or other building that had been standing for more than ten years.
He pointed out that in our district (where there are several such reputed secret tunnels) these buildings stand on solid basalt, which would present any would-be tunneller with a very solid challenge. How any such tunnel could be constructed 'secretly', let alone kept secret, boggles the mind.

But seriously, it sounds as if you've really done your research and the story will be plenty gripping without them! Can't wait to read this!