I was present recently at the inaugural meeting of Ireland’s branch of the Richard III Society and one of the questions before us was, what are we going to do?  We need, it was agreed, a crackingly good programme for our first year  -  a couple of accredited speakers and perhaps a study event  -  to catch the eye of potential new members. What would interest people? Overwhelmingly the topics suggested dwelt on that body in the car park. The King’s now verified scoliosis, for instance; how would it have affected him as a warrior? Or how about the recently disclosed evidence of his ringworm infestation; what did it tell us about his life and times? And those battle wounds, so clearly visible on his bones after more than 500 years; which of them would have been the actual death blow? 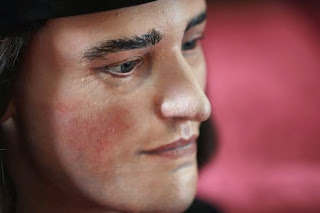 Now I’m not squeamish about death and disease. Medical sciences were my subject long before I was a novelist. And yet I find myself slightly uneasy about this taste for recreational autopsies. Are we maybe watching too many television forensic investigator shows?


When King Richard’s remains were found last year I felt enormous gratitude to all those from Philippa Langley onwards, who had made it happen, and also for the science that made identification a certainty. I have mixed feelings about the facial reconstruction but on balance I welcome the reminder it has given us, if nothing else, that Richard was a young man.  Thirty three. The wounds to his skull and pelvis bear witness to the violence of hand to hand combat. Do we need to analyse his death any further than that? He went to Bosworth Field understanding perfectly well that he might not survive the day, and perhaps he didn’t much care. His wife was dead, his son was dead, and the Cousins’ War was a nest of vipers.

There are instances in history where there might be some justification for breaching the privacy of the doctor’s consulting room. Did Henry VIII have syphilis, or diabetes, or McLeod Syndrome? Would one or any of those diagnoses explain his destructive nature and his frequent recourse to the axe? Would it make him a more forgivable figure?
Haemophilia in Queen Victoria’s numerous descendants certainly had profound consequences for the Romanov dynasty. If the Tsesarevich Alexis hadn’t been haemophiliac the Tsarina wouldn’t have fallen under the thrall of Rasputin and Russia might have learned to love its German Empress. Perhaps, perhaps.
And if we know why haemophilia has apparently disappeared from the remnants of Europe’s royal houses  -  monarchs now know better than to marry off their daughters to first cousins  -  it would still be interesting to know where the gene sprang from.  Could Victoria’s mother have been a carrier? Or was Queen Victoria the unfortunate source of a spontaneous mutation? Such things do happen.


George III’s porphyria, a diagnosis that is still debated, led to the Regency, but the life of the nation wasn’t greatly affected. Life went on. Revolution didn’t come to our shores and eventually political reform did.  Yes, it would be interesting to have a firm diagnosis, but it would hardly change our view of George’s reign.  A more interesting point would be whether his porphyria (or whatever else it was) has now been bred out of the Royal Family? But actually it’s none of our business.


As for King Richard, my thoughts are that he should be laid quickly and finally to rest. A Catholic funeral mass and a tomb worthy of an anointed King.  No more picking over his bones, no judicial reviews, no soi disant descendants bickering about his resting place. And no more forensics. He died a violent and horrible death along with many others, on Bosworth Field. Time to close the autopsy file.
Posted by Laurie at 01:30

The trouble with Richard III is that really, so little is known about him. Everything I thought I knew, and much of what appeared in "The White Queen", seems to derive directly from the action and dialogue in Shakespeare's "Richard III", itself derived from faulty history books.

We are fascinated, for some reason, by the tragedy of his short reign and violent death, although many other people, from kings to commoners, died equally violently. Did he really authorise the killing of the Princes in the Tower? What would have happened if he had won the battle of Bosworth? (My guess is that some other traitor would have surfaced within a year or two and he would not have survived for very long anyway).

The very fact that you attended an inaugural meeting of the Richard III society of Ireland shows how unkillable this story is.

I wonder why so many people want to love him. (As opposed to say, Richard II, who has attracted no such following, despite dying a horrible death).

I guess there must be some contemporary sources that are more reliable than Shakespeare?
But yes, it is odd that people want to love him. He was a tough man, living in a violent, brutal age. Someone would have murdered the Princes in the Tower, just for the reason that England was seen to need an adult, strong ruler. It was the horror of the Wars of the Roses that lay behind Henry the Eighth's career of serial monogamy, in search of male heirs. Ironically, as we all know, he did die leaving a child King, and though Mary was a bit of a disaster, Elizabeth was a much better ruler than many before her - but he had no way of knowing that would be the case. He didn't want England plunged into civil war after him. And for the common people, who I always prefer to aristocrats and royals, a life without a civil war was infinitely preferable.I don't like Henry the Eighth, as a historical character, but one must be fair. It's a pity for Richard that he had a politically motivated genius to paint a brilliant and partial posthumous portrait of him. Very interesting, Laurie.
But as to the Empress Alexandra being German, a lot of Russian empresses had been, including Catherine the Great, I believe. The origins of the Revolution went back to beyond Rasputin, to Alexander the Third, was it? The one who was assassinated and was so very repressive. And to republican ideas and economic crisis, bad harvests and a backward economy - and the existence of determined revolutionaries with a vision and an agenda - in a word, Lenin. If none of those things had been there, the Empress's fixation with Rasputin could have happened without danger to the monarchy, I reckon.

Henry VIII was certainly always looking over his shoulder to the WOTR. After all, the Tudors had a pretty shaky claim to the throne. And Mary would probably have been a much better ruler if it hadn't have been for her brother's fervent Protestantism. As England's first queen regnant she laid the way for Elizabeth, who even pinched her motto, 'Veritas Temporis Filia' - Truth is the daughter of Time. (Now where I have I heard that before?!) We probably should thank Shakespeare, whose idea of history was nothing like ours, for the existence of the RIII Society. Agree absolutely he should be buried ASAP!

I find it SO disgusting that there is an intention to continually disturb him from his final resting place to conduct MORE tests. Let him rest in peace for goodness sake.

Mmm.. good to be here in your article or post, whatever, I think I should also work hard for my own website like I see some good and updated working in your site.
bubblegum casting

Likes enormously boost the acceptance of the website webpage and using the proper selection rely; a great deal of men and women will likely be drawn to your account. The corporations which provide these expert services, will provide you with non-automated or robotic likes and provide you with actual Instagram likes. The nice element about this is often that they are right away shipped to your account meaning you usually do not need to have to show up at that a whole lot. And if you are a firm, boosting your Instagram likes may be effective. http://www.buyrealiglikes.com/increase-instagram-video-likes