The Ghost Hunting Mobs of Victorian London by Imogen Robertson

Judging by the numerous sirens that go by my house every day, Bermondsey still keeps the Metropolitan Police pretty busy, but I doubt they spend as much time as they once did dealing with ghosts or with the crowds that went looking for them. Learning of the ghost hunting flash-mobs has been one of the many joys of The Haunted: A Social History of Ghosts by Owen Davies. It’s a scholarly work, brilliantly researched and thoroughly footnoted but it also has a lively style, an original take on the subject matter and a real sense of compassion and understanding of how we see and understand ghosts. It’s great and covers belief systems from medieval to modern times and across the country.

But back to the mobs. Grange Road in Bermondsey is not my first choice place to hang out of an evening, but in July 1830 people walked miles to spend the whole night just standing outside a house there. A rumour had spread that the ghost of a reclusive clergyman who had recently died had been spotted in his old house, still wearing his night-cap and smoking his pipe, as he had in life. Pretty soon the road was blocked with crowds of people willing to wait all night to get a glimpse. It was also said that one person who had dared enter the house had seen him vanish up the chimney. A whole police division were summoned to deal with a crowd of two thousand people, completely blocking the road and disturbing the sleep of the residents in a way that the ghost himself never had. An inspector made a search and found no ghosts, nor any sign of anyone pretending to be one. A guard was mounted to keep the crowd from gathering in future. (The Times July 8 1830)

In 1865 the trouble was outside St George’s church in Borough, with hundreds of people staying out from nine in the evening until three or four the following morning. A Sergeant Chenery arrested a costermonger called Henry Stanley for causing a disturbance. He’d been held for shouting ‘Here’s the ghost’, and refusing to stop doing so when asked. He claimed he was just one of the curious and was set free. I can’t help sympathising with the Sergeant. The crowds were so great they again had to draft in extra officers to keep the road clear. What the story of the ghost was, or even if there was one at all, we do not know. (The Times May 27 1865) 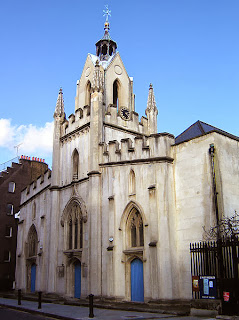 Then in 1868 hundreds gathered outside Bermondsey church yard to see a ghost that had been reported there. Inspector Mawson thought the cause of the trouble was that a drowning victim had been brought to the dead-house next to the church until an inquest could be held. For some of the local boys this was enough to start a story of a ghost and then the crowds gathered. A policeman got his helmet knocked off by an enthusiastic sensation seeker who was fined 2s.  (The Times August 1 1868) Now, of course, all we sensation seekers can stay in the warm and watch re-runs of Most Haunted.

I understand the curiosity of the crowds and I love reading ghost stories, but I have never gone on any kind of ghost hunting expedition myself. It’s not because I think the whole thing ‘ridiculous’ as the Southwark magistrate who imposed that fine did though. I am sure that in the shared excitement of the crowd, looking for something above and beyond the day to day, a lot of those people did see ghosts. I am also fairly sure if I went on a ghost hunt I’d see one too.

Let me be clear. I don’t believe in ghosts or magic or the supernatural in any form. It’s all just natural - though, now you mention it, while I was looking up these stories a Jehovah’s Witness turned up and handed me a leaflet called ‘do the dead return?’ which was a bit creepy - but anyway, just because I don’t believe in ghosts doesn’t mean they don’t scare the hell out of me. I’m professionally imaginative and rather good at thinking myself into all sort of odd states, including hearing voices which seem to come from somewhere other than myself. And I don’t want to see a ghost. I don’t think it would be any less terrifying just because I didn’t believe in it. My irrational mind would have put together the shadows and night noises, dragged in every ghost story I’ve ever heard and confronted me with something hellish and heart attack worthy while my rational mind was still going ‘Huh…?’ Our minds can be frightening places and I think it best I only encourage mine under controlled circumstances. Dark churchyards, ruins, cross-roads in the countryside and deserted manor houses are not controlled circumstances.

Though the imaginations of ghost mobs sometimes got a little help. In 1874 in Westminster crowds were also blocking the road outside a churchyard to see a ghost. A police constable hid in the churchyard and before long he had arrested the culprit - a labourer called Frederick Grimmond whom the constable saw climb over the fence and put a sheet over his head. It didn’t sound like it was a tough arrest. Grimmond made a dramatic dash across the church yard but fell over a grave and was taken before he could get up again. (The Times July 6 1874) 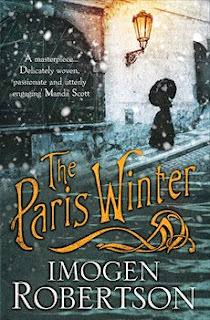 Very enjoyable thank you Imogen. I share your view on ghosts and the supernatural, but have still allowed the occasional fantasy that one of my subjects might be looking, rather sceptically, over my shoulder as I write...

I think we all love a good ghost story! Enjoyed the bit about the policeman giving chase to the joker pretending to be a ghost.
Liz