'Be Not Ashamed You Were Bred In This Hospital. Own it.' - Lucy Inglis 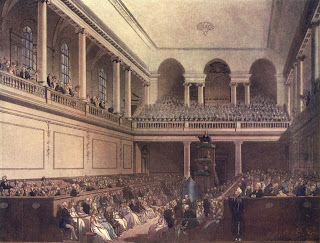 In 1722, Thomas Coram was fifty-four and had led a hard life at sea. On his return to London, he went to work in the City but chose to live in Rotherhithe, ‘the common Residence of Seafaring People’. Naturally inclined to hard work, he walked to and from the City at dawn and dusk, and was shocked to see so many ‘young Children exposed, sometimes alive, sometimes dead, and sometimes dying’. It took until 1739 for him to raise the money to open the hospital. 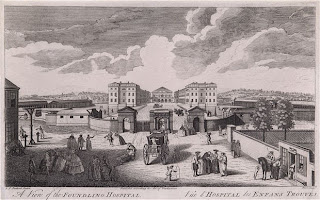 Coram’s success lay in petitioning London’s aristocracy and making philanthropy fashionable. William Hogarth and Handel were both governors and the Messiah was performed there for the benefit of the hospital. The first children were admitted on 25 March 1741. There to supervise their admission were the Duke of Richmond and William Hogarth. A crowd had gathered outside, and the porter struggled to close the door on those wanting to get in. Thirty children were admitted, made up of eighteen boys and twelve girls, and ‘the Expressions of Grief of the Women whose Children could not be admitted were Scarcely more observable than those of some of the Women who parted with their Children, so that a more moving Scene can’t well be imagined’.

The Foundling did their best for the thousands of children in their care. They did not turn away children of mixed race. They took in children of insane mothers, and they became increasingly aware that The Foundling served a dual purpose: by relieving parents of a child they could no longer care for, the governors noted that there was a chance they could be restored ‘to a course of Industry and Virtue so that almost every Act of the Charity is attended with a Double Benefit, the preservation of the Child and of the Parent’. One disabled boy, George Grafton, had been admitted aged ten with such severe club feet that he had learned to walk on the outside of his ankles. He underwent a successful surgical repair for the condition, paid for by The Foundling. The hospital also paid for him to be apprenticed to a shoemaker. He returned to the hospital’s employ to ‘furnish shoes for the children’. Blind children were educated for a career in music. One of these, Tom Grenville, became the organist at The Foundling as a grown man, living locally with his wife and family. Some children were too profoundly disabled ever to leave, and were cared for all their lives. 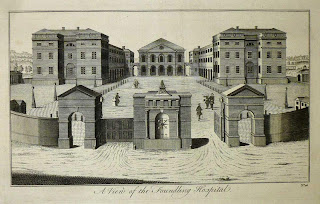 What became of the children who left? Many returned at some point. Some came for help, some for advice, some for information about their parents. One such child was Sarah Billington who, aged twenty-eight, wrote, ‘desiring to be informed who are her parents; she having laboured for many years under the greatest anxiety of mind, wishing to know them’. The governors could do no more than send her a copy of her admission notes.

The Foundling continued on the same spot until the 1920s, when the land was sold for development. All that remains of the hospital today are the colonnades, although in recent years The Foundling Hospital Charity has provided a playground for Great Ormond Street Hospital. Thus Thomas Coram’s legacy still attends to the needs of children at a difficult time in their lives. The pride those involved felt in the institution was reflected in the instructions drawn up by the governors, in 1754, for those about to leave: ‘Be not ashamed that you were bred in this Hospital. Own it.’

I saw a fascinating TV programme about the hospital and its founder which concentrated on how Handel's Messiah was chosen as the very first musical event to be a charity fund-raiser. Not only did this rocket the aria as into popularity which has not dwindled since and also heralded the phenomenon of the 'must attend' charity event by anyone who was anyone or hoped to be.

PS. Correction - why did I type 'aria' instead of 'oratorio'?

What a wonderful story. It's so good to read about something positive, thank you.

A good story about a great institution.

Thomas Coram was a hero!

Read Coram Boy by Jamila Gavin for a fascinating story about the Foundling Home.

Thank you Lucy! As a granddaughter of a child resident of The Foundling Hospital this is a story close to my hear. Lovely post.

very interesting! I visited the museum yesterday as I had a couple of hours to spend before going to an event at the British Library.

Some of the exhibits are heartbreaking, but what an extraordinary man!