This is my favourite painting in the whole world. It is by the Italian Renaissance painter, Piero della Francesca and is housed in the Museo della Madonna del Parto in Monterchi, a small hilltop town in Tuscany. 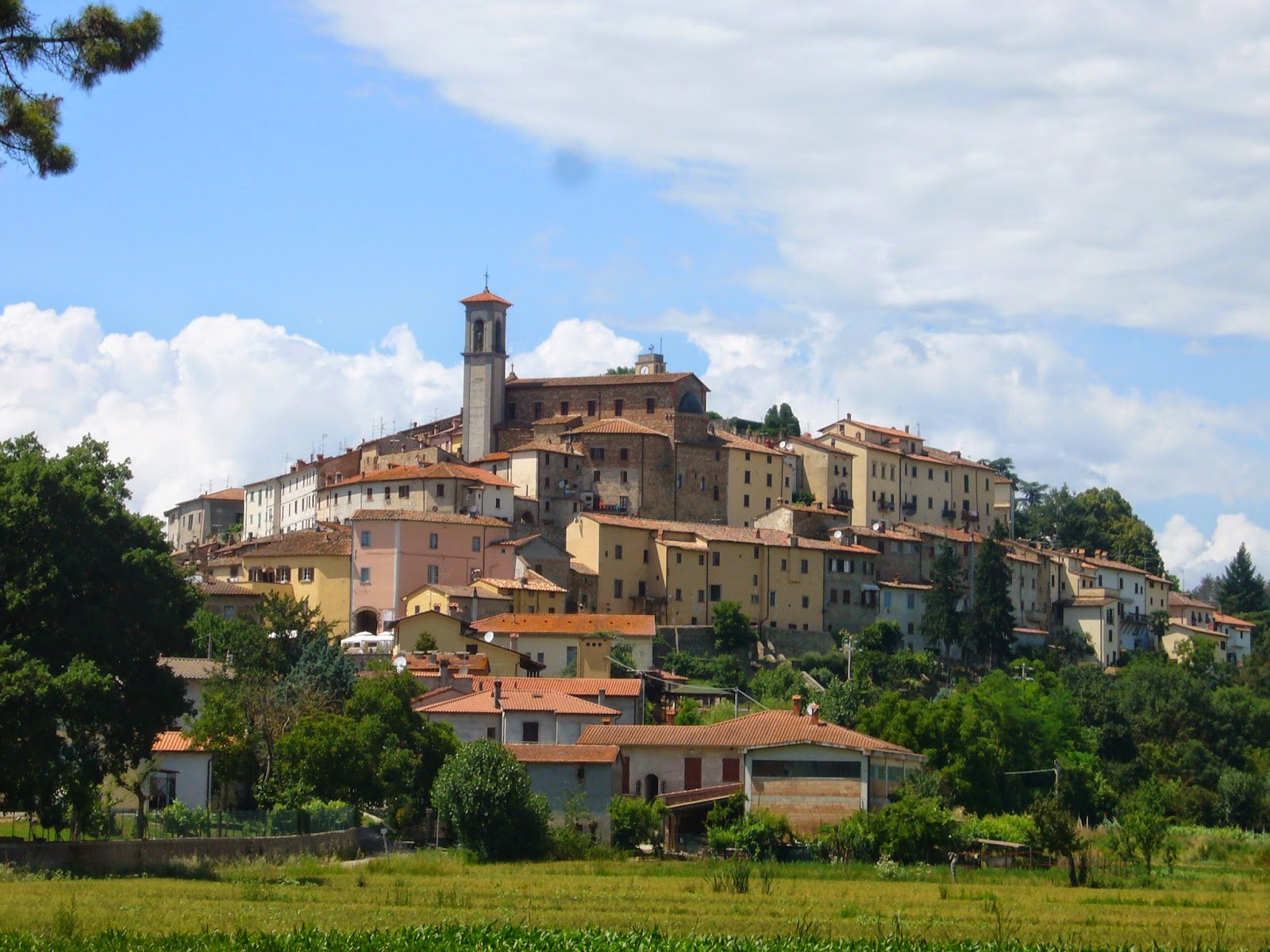 By the time you read this blog. I will be there. One of the first things I will do is go and visit Piero's fresco in the Museo just outside the gates of the town. She is the only occupant. the whole building is devoted to her. In a way, this is right, because she is so special, but she seems strangely out of context in this small, unprepossessing modern building. She should be in a church and, of course, she once was but her original home, the church of Santa Maria di Momentana (Santa Maria in Silvis), was destroyed by an earthquake. She was then moved to a cemetery chapel which fell into decay and so finally to her own museum in 1992. 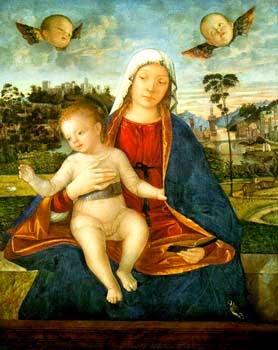 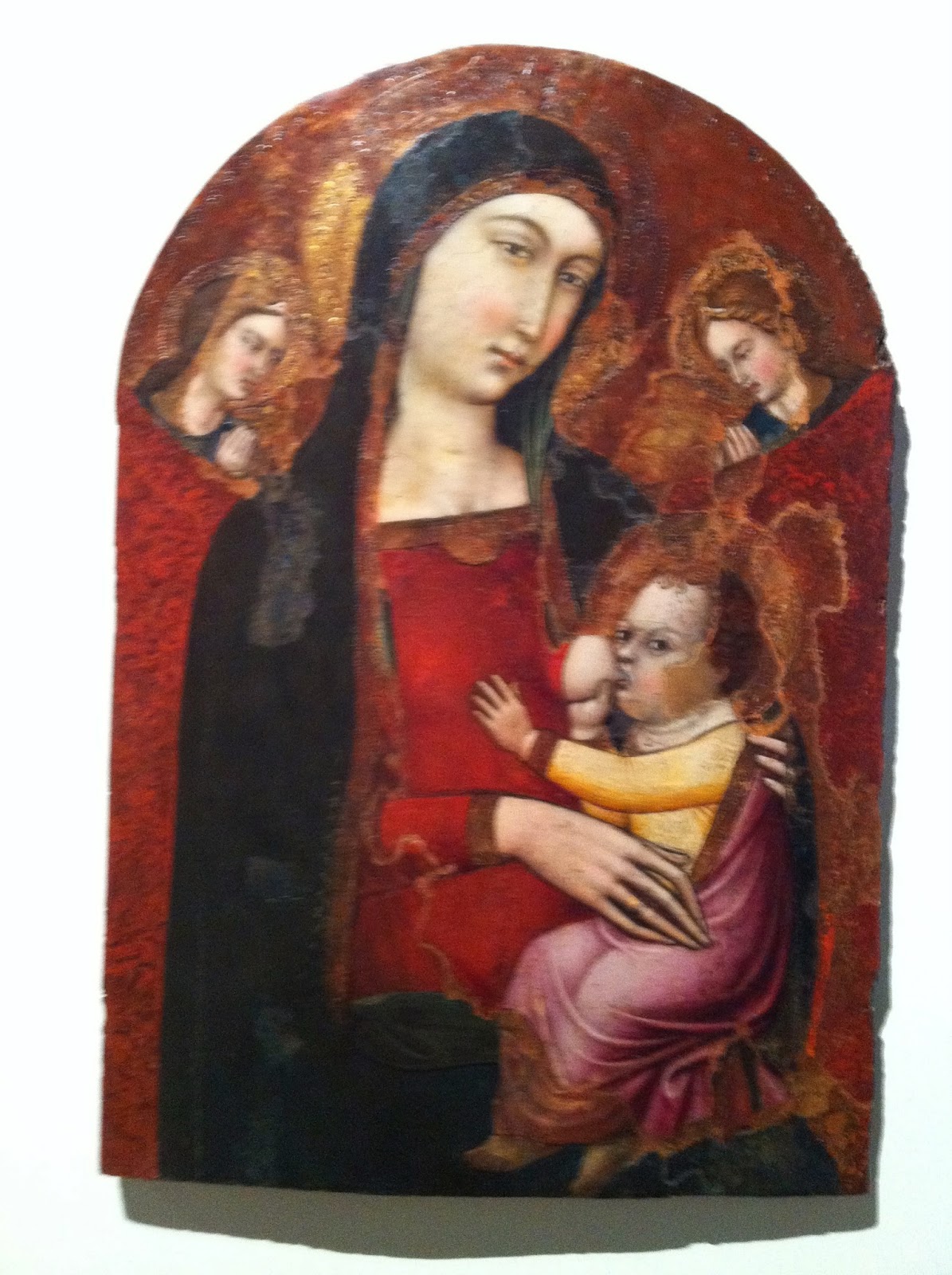 If you spend any time in Italy, visiting churches, art galleries, museums, you will see plenty of Madonnas, with child and without, annunciations and assumptions, even a few where she is pregnant, or giving milk (as here), but few have the transfixing quality of this one. I am in no way religious, brought up stoutly C of E, but I find Piero della Francesco's fresco peculiarly moving. 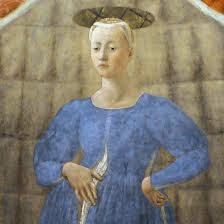 She looks like a real woman, and a young one, heavily pregnant, with one hand at her hip to ease her back. She has none of the rich trappings of other Madonnas. She is dressed simply, the beauty of her face lies in its humanity, its ordinariness. There is a strangely long suffering weariness about her (one with which anyone who has ever been pregnant can identify) but hers is so much greater, for this is the face of a young girl, a peasant girl, gravid with a God.  I find this fresco awe-inspiring in the true sense. She is flanked by two angels who have a solidity about them, dressed in a symmetry of colours, in no way ethereal, grave, beautiful young men with wings. 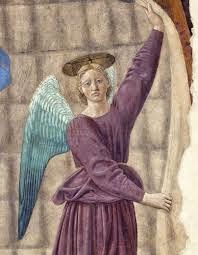 The canopy that they are holding open is decorated with pomegranates. This has been interpreted as a symbol of Christ's passion, and the Madonna certainly has the expression of one who can read what is to come, but the pomegranate also evokes much more ancient, pagan goddesses: the lost Persephone and her mother Demeter, the goddess Hera who is often shown with a pomegranate in her hand as the emblem of fertility, blood and death.  Perhaps this is an indication of a much older tradition. Legend has it that a local stream was sacred to the goddess and into modern times women would bathe there hoping either to conceive or to protect the child within. Certainly, offerings are left in front of the Madonna del Parto, bunches of flowers, more often than not picked from the fields or the garden, simple offerings left by ordinary women asking for the blessing and intersession of this most human of Madonnas.

I am off to Rome today, so see you in Italy! When I was travelling for The Olive Route, I came across this fruit in several different aspects.
The pomegranate is one of the world's older religious fruit symbols and has a slightly different meaning to different peoples. The Chinese see it as a blessing for many sons and plenty of money. This fruit of juice and seeds has an important role in Jewish festivals too. It is woven into certain of their religious garments.Early Christianity saw it as a symbol of eternal life. It is also revered for its medicinal properties. I believe it originally came from Iran but has been very important in the eastern Mediterranean for millennia. It has a history almost as rich as the olive.

I am off to Massachusetts to visit friends in old Victorian house, full of cats and one dog + lots of love, surrounded by old growth green and wild and native flowers. I too love this Madonna, she, almost pagan in her realness, and the colors so intense one can almost taste them. I happen to know it is one of Terri Windlings favorites too and will share with her on Face book. Have a lovely and Thank you for THIS lovely post.

Thank you for sharing this painting with us!

Pomegranate could have a post of their own, Carol. Have a good time in Rome. I have yet to visit (closed yesterday) I should be able to rectify that today.

Write that pomegranate post, Celia or Carol! We'll be in Tuscany in August and will try for Monterchi. I love Piero - though so far for me it is the Resurrection in San Sepolcro that I have found most stunning. Must get to Arezzo.

When a wonderful writer interrogates a beautiful painting you get a fantastic blog like this.

I had never noticed that weary hand on her back before, and it means so much.

A beautiful painting and post. The narrow gap in her dress reminds me of a ripe fruit on the point of opening up. Hope your holidaying is wonderful.

What a wonderful painting! I love della Francesca's blues, and this is such a heavenly blue - literally so, of course, since it was the Virgin's colour. I hope to get to see it some time. I do agree about the Virgin also containing the meanings that the old fertility goddesses did. The Kuan Yin, in China, who is the only Avalokitesvara (Bodhissattva of Mercy) who is female, is supposed to have come to China via Nestorian Christianity, is often depicted with a boy on her lap, and had the reputation of bringing sons to wives who desperately needed them. But don't the breastfeeding Madonnas look uncomfortable! Of course they obey the imperative of having to show the baby, whose nose, under normal circumstances, would be quite buried in the maternal breast.