In July Celia Rees and I are taking the History Girls' anthology Daughters of Time  out on the road and into a secondary school on Canvey Island. Canvey Island is an almost island in the Thames estuary east of London. I have never been to Canvey. As a teenage Dr Feelgood fan I did imagine a kind of pilgrimage and the film Oil City Confidential is a wonderful documentary about the band - including the wonderful fact that Wilko Johnson (maybe better known to some as the mute executioner who beheaded Sean Bean in Game of Thrones) is an ex english teacher who in the early 70s did the hippy trail to Kashmir through Afghhanistan. Simply to honour those things I give you this tune. Roxette.


OK, back to Daughters of Time.  In order to prepare for the visit I've been going over my notes and thoughts about my Mary Seacole story. If you've read it you'll know I set the story during the Crimean war, the sum of my knowledge about such war having been gleaned from one of my favourite books ever, Beryl Bainbridge's marvellous Master Georgie.

I am sure I have written about Bainbridge's historical novels on this site before, but they are beautiful. Having said that I've never read According to Queeney, her book about Hester Thrale, I think because I am afraid I might not like it as much.

I first read The Birthday Boys, about Scotts' last journey during my intense polar exploration phase. I think a lot of us are utterly fascinated and appalled by early Antarctic journeys and this book seared its way into my heart. I've read it again and again. Every Man For Himself, about the Titanic is brilliant too but I suppose I always loved snow better than sinking ships.

The thing I find most wonderful about her books is the sheer condensed crafts(wo)manship there is in every line. No word is wasted. If you read too fast you will miss something vital or beautiful and usually both.

My favourite, Master Georgie is set for a large part on the battlefields of this war. It's about lies and truth and life and death and new science of photography.

Bainbridge's Master Georgie strikes me as a very modern character, a man driven by self. That sounds far from appealing, and indeed he is but the book is told through the voice of Myrtle, orphaned street girl taken in by Georgie's family, she is a kind of cypher - never sure of her place in the household or in the world and so full of unrequited love that it hurts.

My story, The Lad That Stands Before You, concerns a young soldier who's left the North West of England to escape a life working all hours in the mills. It's quite hard to summarise without giving the twist away but Mary Seacole, much loved by the fighting troops on the frontline, helps our protagonist. Mary Seacole was an incredible woman however you look at it. Born on Jamaica with a Scottish father and a local healer and hotelier mother, Seacole was widowed young and worked hard her whole life as a doctress, a healer who used herbs along side nursing skills. 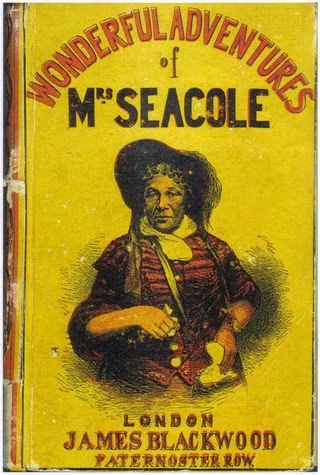 Mrs Seacole travelled widely, to panama to London aged 16 and all over the Caribbean islands. When the Crimean War broke out she went again to London to offer her services to Florence Nightingale's nurses but was turned down.  That didn't stop her, she went to the Crimea using her own money and set up a Hotel - a sort of private hospital that offered food drink and rest and recuperation. On her return and decline into poverty in London, ex soldiers set up a fund for her and her book became a huge bestseller. 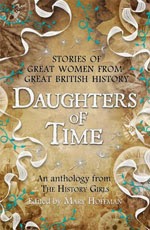 Like every one of the women in our book she's  fascinating and exceptional and the problem for me on Canvey will be how to cram her amazing adventures into a teeny tiny school period . And I shall have to be careful not to get carried away by a woman who travelled widely, who was one of the first ever women writers who was a bestseller and who never let circumstances get in the way of opportunity.

Catherine Johnson's latest book is Sawbones  'Both thought-provoking and accessible, this is an impressive historical adventure.' Booktrust website review.

Posted by Catherine Johnson at 07:23

Serendipity! I've just been sitting in bed with a cup of tea, reading The Lad That Stands Before You, and loving it. Such a lot conveyed in that short story; it's brilliant! Moving, interesting, exciting, and thought-provoking, and it certainly makes me want to read more about that time and place and character. Thank you, Catherine. NB I recommend treating Daughters Of Time as you might a box of favourite chocolates. Eek them out, rationing one a week as a Saturday morning treat, or similar, and you have a whole week to let each one properly sink in before moving on to the next one. They are rich fare!

Thanks so much Pippa! It's a lovely anthology and I'm so proud to be part of it x

OOh, good luck! Do tell us how you and Celia get on. If you inclined to read another book on the Crimea. let me recommend History Girl Louise Berridge's fabulous novel, Into the Valley of Death. I absolutely don't read "war fiction" and I adored it.