D Day + some, by Clare Mulley

This 6th June was the 70th anniversary of D Day, the day when Allied troops landed in Normandy to start the liberation of Nazi German-occupied western Europe. Despite the moving coverage given to this anniversary, it is hard to imagine the courage of those who took part, or to quantify the terrible losses of that day. As this summer progresses we should also remember the heroism of others who were called to action for the liberation of Europe.

On 5th June I went to the launch of Paddy Ashdown’s new book, The Cruel Victory: The French Resistance and the Battle for the Vercors, 1944, which tells the story of the French maquis who rose up to challenge the Nazi occupiers of their country, declare an area of free France, and tie-up battle-ready Wehrmacht troops who might otherwise be deployed north. 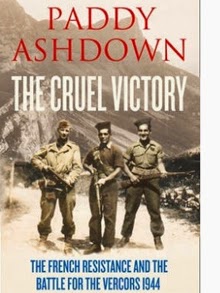 The Vercors rising was one of the largest resistance actions of the war and, although brutally suppressed, Ashdown argues that ultimately it was nevertheless a ‘cruel victory’. Although I take some issue with this conclusion, that does not diminish the importance of the action in the Vercors, or of this book in assessing it within the wider context of the Allied war strategy, and providing a fine tribute to the men, and women, who served on the plateau. Read my review for The Spectator.

I knew that Ashdown was working on this book because he had been in touch about the role played by Christine Granville, Britain’s first female special agent of the Second World War, and the subject of my last biography, The Spy Who Loved. Paddy describes Christine rather memorably as ‘beguilingly beautiful, extraordinarily courageous and enthusiastically promiscuous’. She was also a brilliantly effective special agent, and ultimately highly honoured for her huge contribution to the Allied war effort.

Christine had been parachuted into France some weeks before the Vercors rising to act as a courier for Francis Cammaerts, the rising star of SOE in France who was coordinating resistance plans to support the Allied liberation in the south of the country. Christine’s role was to take messages between the different resistance cells, and help to coordinate the clandestine supply of arms and equipment. Although she and Francis did serve on the Vercors plateau during the rising, her most important work - work which would make her legendary within the British special services - was yet to come.

The morning after her retreat from the overrun Vercors battle zone, Christine threw herself into her next mission. Over the next few days she established the first contact between the French resistance on one side of the Alps, and the Italian partisans over the mountains. She then single-handedly secured the defection of an entire German garrison on a strategic pass through the mountains. On her return she learnt that Francis, and two of his colleagues, had been arrested by the Gestapo during a standard roadblock check. Christine begged members of the local resistance to mount a rescue operation. Probably wisely, they rejected the idea. At this point in the war they could not afford to risk either the men or the weapons required for such an operation. In any case, the three men were held in a secure prison and due to be shot within days, so any rescue attempt seemed doomed to failure if not suicidal. Undaunted, Christine cycled over to the prison, assessed the situation, and secured the release of all three men on her own…

Francis and Christine returned to work immediately. The American General Patch, who commanded Operation Dragoon (Anvil), was due to land with his troops on the French Mediterranean coast on 15 August. The American forces' plan was to break out of the bridgeheads and fight up the Route Napoleon towards Grenoble with the aim of rendezvousing there on D-Day +90. They had not counted on French support. Francis’s resistance circuit, and connected local resistance groups, felled trees and blew up bridges to harry and redirect German troop movements while clearing the through roads for the Americans. MRD Foot, the father of SOE historians, believed that Patch arrived eighty-four days ahead of schedule as a result of this brilliant work. Paddy Ashdown believes it took Patch just 72 hours to get through, and he cites this work as one of the greatest contributions of the French resistance to the Allied war effort.

The Germans stipulated that they would only surrender to the Americans. Poignantly, however, in the event they were obliged to surrender to Lt Colonel Huet as well, the French commander of the tragic Vercors resistance. That evening Francis and Christine went freewheeling down a hill in a US jeep to celebrate the victory.

D Day was a harrowing day of incredible bravery and fortitude. As we commemorate the courage of the men who stormed the Normandy beaches, we should also remember their colleagues-in-arms among the courageous French resistance and the British, Polish and American officers who worked with them either in the invasionary forces or with the special forces in the field. Among them were Francis Cammaerts and Krystyna Skarbek, aka Christine Granville, who shared their goal of a free Europe, and who would never forget their fallen comrades.

What an amazing character she was! Thank you, Clare.