This week, the world seems full of borders and changes, some too worrying to write about here on History Girls. One change, close to home, comes with the start of the 100 day countdown to the vote on Scottish Independence, bringing the threat of the break-up of Great Britain. I understand why the YES vote carries a political and emotional charge for some people, the thought of any such split grieves me. Note that this feeling is sadness, even though back around 1320, the riled Scots raiders came as far South as Ripon, almost to my doorstep.

“Border” is such a neat and orderly word, as if the legal drawing of a line can solve or exclude age-old problems. History persists, and a border is not as stable as it might seem. Cultural attitudes, problems and symbols lurk for decades after legal aspects are supposed to be tidied nicely away. 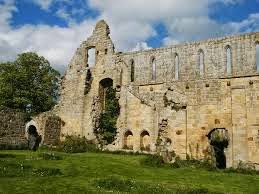 Only last week, following by car the hundred or so miles of Yorkshire Tour De France route, I realised the cyclists would be pedalling their way through the great sheep pastures of the old French monastic orders,. They would be passing abbeys like Jervaulx, and pushing their way round the ecclesiastical borders and realms that Henry VIII decided to demolish. With their loyalty professed to their Orders and to the Pope, these monastic regions were, in some ways, foreign countries too.

Two books have nudged this changeability of borders into my mind. One was a random library-sale copy of Ann Leslie’s autobiography, Fighting My Snakes. I read her account of the heady opening of Berlin Wall and her world-weary account of how soon Re-unification sobered the attitudes of both East and West Germans towards their brothers and sisters. Another broken wall that meant trouble. 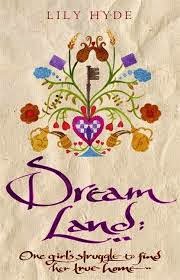 I’ve also been reading “Dream Land: One Girl's Struggle to Find Her True Home", a novel by the journalist Lily Hyde, who lives and works in the Crimea. This novel, intended for older middle or teen reader, is a thought-provoking story rooted in the Crimean Tatar diaspora during and after World War II.
Set in 1992, much of the story is told through the character and experiences of twelve-year old Safi, alongside her Grandfather’s tales and earlier memories. Urged on by his dreams of their past homeland, Safi’s family leave their comfortable house in Samarkand and move back to the Crimea and their ancestral home on the side of a wooded mountain.
Here, legally squatters on their own land, Safi’s father and uncles are building a small house. However, the Russian villagers show little love for the Tatar settlers, and the family itself is worn gradually down by the contrast between their harsh "new" life and Grandfather’s hopes.
Yet, despite all the past sorrows and present disappointments , the book does read hopefully. Safi herself is a wonderful character, a girl brave enough to challenge omissions in the school’s Russian history text books and to stand up for her right to have a home in this “dreamland”. Lily Hyde has clearly drawn on her own knowledge and researches to make this a most memorable book and a tale that deserves telling - maybe even more so given all the changes in that region right now.


Finally, talking of borders, I’d like to include this animated map of Europe, which really made me realise how easy it is, here in the UK, to mistakenly imagine a border as a settled thing.

That animated map is such a vivid way of showing just how insecure things can be. A thought-provoking post!

Penny, that map is incredible. I loved the music too. All the History Girls who watch that map will probably find their own bits of emotional resonance in it, as you have. Thank you.

That map is amazing! Was definitely keeping half an eye on Scotland/Great Britain and contrasting that with all the changes going on around mid-Europe

Can only agree with others about the map, Penny. Thank you for sharing it, and for a thought-provoking post. Particuarly liked your reminder that we think of as old English monuments - the ruined monasteries and abbeys -were actually outposts of foreign power.

Thank you for all your comments. That map truly did astound me when I first saw it, especially all those little countries in central Europe and the spread of Spain.

The map is all split-second but I feel that historical writing - biographies, memoirs and fiction - help to show the longer term impact of change.

Brilliant! I didn't know Portugal came and went like that!

You got me thinking very hard.