Women of the World - interview with Helen McCarthy by Eve Edwards 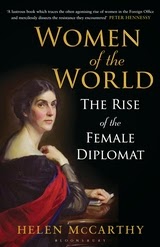 In conversation...two women of the world.  Helen McCarthy, Senior Lecturer at Queen Mary University of London, has just published the first account of the role of women in the diplomatic service.  As I served five years in the Foreign Office myself before turning into a historical novelist, I was the designated History Girl sent to get my telegram of information in time for close of play.

Text:
Have you ever asked yourself when women were allowed to join one of the most prestigious of professions, that of the diplomatic service?  My guess would have been in the interwar period, at the same time as women got the vote, but I would have been way out.  Though the Home Civil service was opened up in that period, women were not allowed to join the Foreign Office until 1946, and even then they had to leave on marriage.  That rule was not lifted until 1973.  In the 1990s I worked with women who had had their careers cut short due the the unfortunate fact they were female and had fallen in love.  Their male spouses were, of course, not expected to make the same sacrifice.  My first question to Helen was therefore if she had a personal connection to writing the book?

Helen: No but I have a very keen interest in women's history, especially how they broke into the professions.  I was working on women’s activism around the League of Nations and the idea of international government in the 1920s and 30s, which is when I discovered this fact about women’s ongoing exclusion from the diplomatic profession.  What looked like a small subject grew to be a much larger story and I realized that no one had written the narrative history going back into the 19th century and on into the post-1946 period so I decided to do it.

What surprises came up during the research?

Helen: I conducted many interviews with the pioneers who joined in the late 40s and 50s.  I was surprised how accepting they were of the marriage bar, most saying they didn't let it bother them, either because they weren't planning on marriage just then or thought it would be fun to try diplomacy for a while.  Of course, the bar might have acted as a deterrent to those to whom it was an immediate problem - married women or those in a relationship - so the protesting voices were silenced that way. The generation who joined in the late 60s and 70s were much more vocal in their opposition to the bar.

The second surprise, which seems to run counter to the bar, is how socially progressive the FO was in other ways.  In the 50s it was one of the first workplaces where it was acceptable to address colleagues by their first name.  Other civil service departments were still more formal.

Why do you think the theme of women in diplomacy is important?

Helen: Firstly, it's a fascinating story that does not fit the standard chronology of feminist advances in other walks of professional and public life.  Ideas about women's unfitness for diplomatic roles and the conflict with the role of diplomatic spouse lingered far longer here, even when women had proved themselves in field either in wartime or in other diplomatic services.  For example, the FO barred women from postings to the Middle East even after they were allowed into the service, despite the fact that Nancy Lambton had worked in Iran and Freya Stark in Iraq during the Second World war with diplomatic status and been praised for her work.  They were dismissed as exceptions that proved the rule – in Lambton’s case even by her own ambassador.  It was the 1980s before the first female diplomat of the new intake was sent to the Middle East.

The debate in the 30s and 40s about allowing women into the FO revolved around perceived gifts of their gender.  Was that the result of contemporary gender conditioning or do you think there is any truth in the view that women do diplomacy differently?

Helen: I'm going to duck the straight answer here as that delves into the thorny question of whether men and women are different ‘by nature’!  However, I think the language over gifts has now become embraced by the diversity agenda.  What were seen as feminine gifts, such as ‘intuition’ or ‘empathy’, are now welcomed as part of the drive to recruit from a wider gender, regional, ethnic pool to reflect the diversity of the country.  Out of fashion is the 'right sort' recruitment where it was believed that only chaps who had gone to the same schools and universities would represent the country effectively.

Who is your diplomatic heroine?

Helen: There are lots of wonderful characters in my book but if pushed I would pick Mary Moore (nee Galbraith) who joined in 1951.  She was a fascinating interview subject who conjured up brilliantly the masculine atmosphere of the Third Room where diplomats of her grade worked.  Suddenly after being kept out for decades the doors were open to women and Mary found herself in the UN Security Council sitting behind the British Ambassador during the Suez crisis as his aide.

If you turned to writing fiction, which person or place from your book would you choose for your novel?

Helen: New York and Washington during the Second World war.  Women were dispatched by London to win the hearts and minds of ordinary American people as part of the campaign to get the US to enter the war.  Winifred Cullis, to name but one, evoked the atmosphere vividly with her account of her trip in a fast lift at the Rockefeller Center and her lecture tour of the country.  She was rubbing shoulders with an eccentric diplomatic community in Washington, the embassy including such figures as Isaiah Berlin and John Wheeler-Bennett.

Would you have made a good diplomat?

Helen: No, my language skills are not up to the job and I would have been homesick.  I might have managed well on the making contacts and political analysis but I'm not sure about my schmoozing skills.

Here is a quick test of your diplomatic etiquette.  Do you know what the diplomatic honours are known as in the service?

Former Second Secretary Political Section Edwards: CMG (Call me god), KCMG (Kings call me god), GCMG (God calls me god).  I've forgotten what they really stand for!  Who is more senior: a duke or a marquis.

Edwards: No.  A duke.  But never mind I never had to know that either - it was all in a book somewhere.

Recommendation:
Helen McCarthy was sent a probing set of questions prior to interview and performed well under cross-examination.  I recommend you read her book and consider her inclusion on invitation for all future QBPs (Queen's Birthday Parties) held at History Girls Central.

What an interesting interview. I was a lowly secretary in an FCO office south of the river 1966-1971 with two years in the Bonn embassy during that time. One thing that was unfair even then was that women had to leave if they married foreigners......men? No.