BEHIND THE SCENES AT THE MUSEUMS by Eleanor Updale

It was only an hour, but what fun. With a little group of local history fans, I was allowed into the store where Edinburgh Council keeps the exhibits for which it can't find space in the city's many museums.
Like so many publicly-owned facilities, this store is the victim of cuts, with hardly anyone left to look after it, but it is in good hands. Paul McAuley is one of
life's great enthusiasts, a skilled archaeologist and conservator, and probably a natural hoarder, too.
Once I got over my shock at the number of 20th century domestic objects that looked rather too familiar, I was hooked.
There was everything from fragments of wartime bombs to textiles, toys, ceramics, clocks, a Lord Provost's fancy chair, 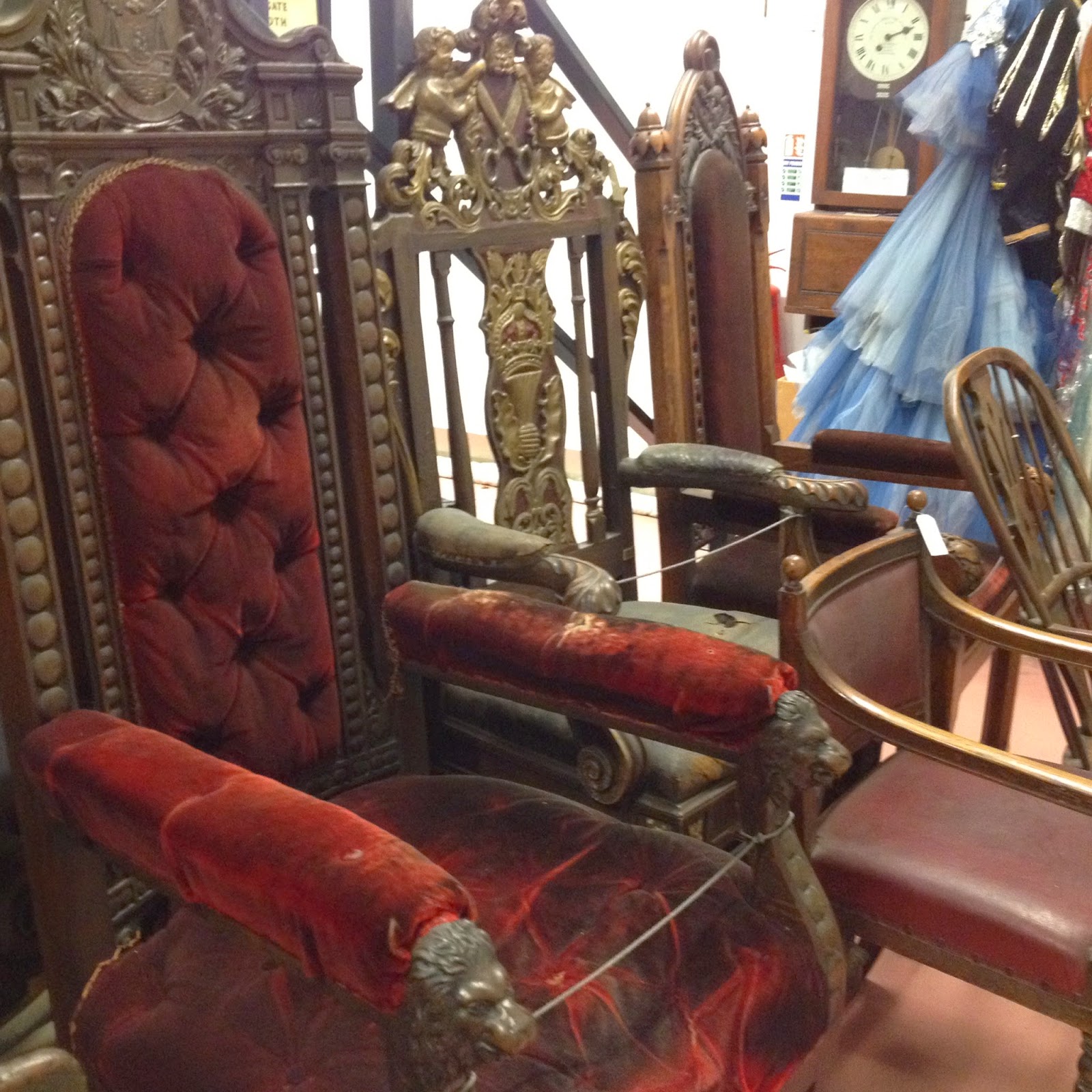 and objects accidentally broken while on display.
Mr McAuley himself has recently cleaned this ornate memorial to George Meikle Kemp, the self-taught architect who designed the Scott Monument. 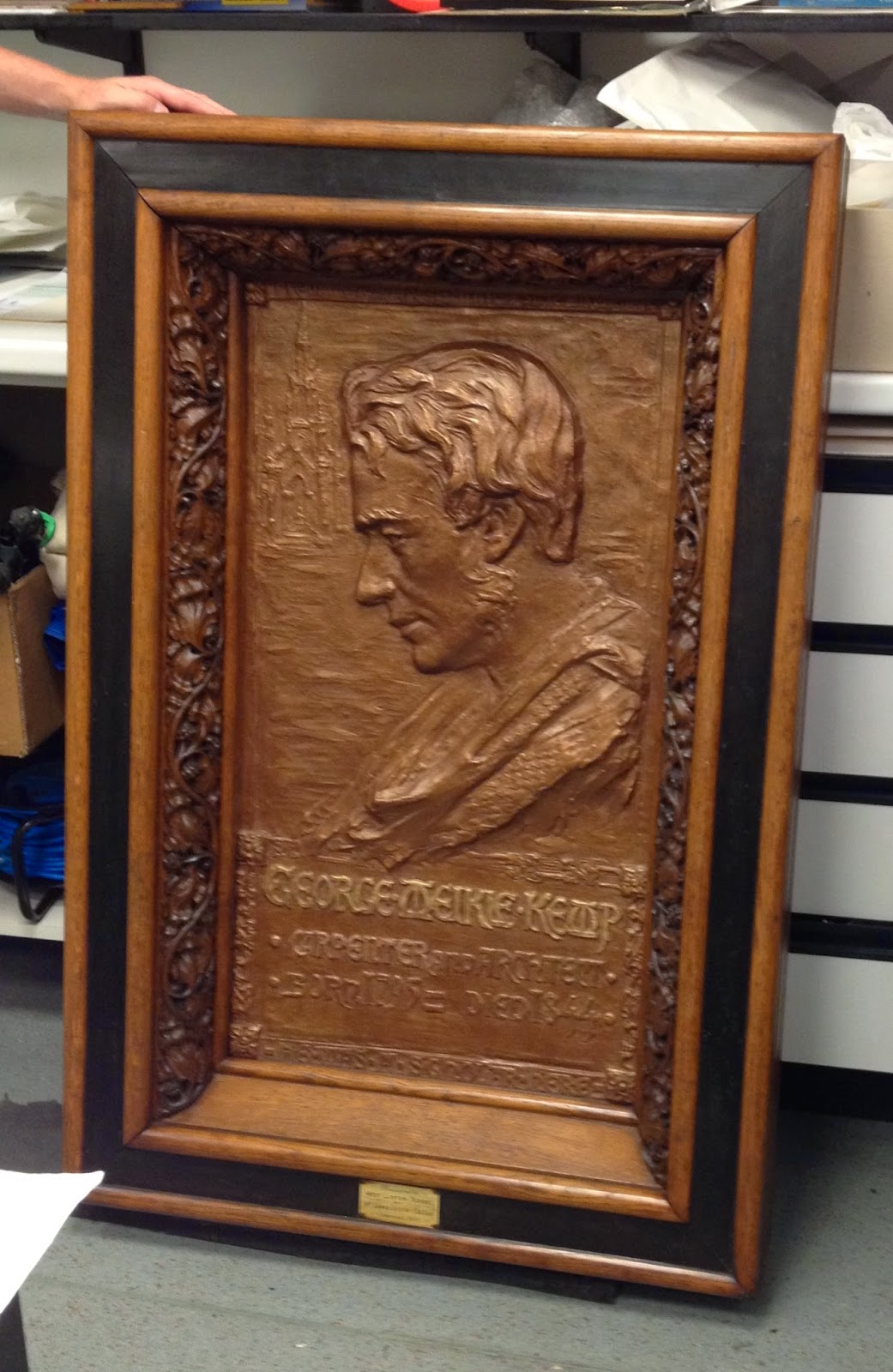 Under a table nearby was the bust on which the framed portrait was based, itself the victim of an accident, waiting for help. 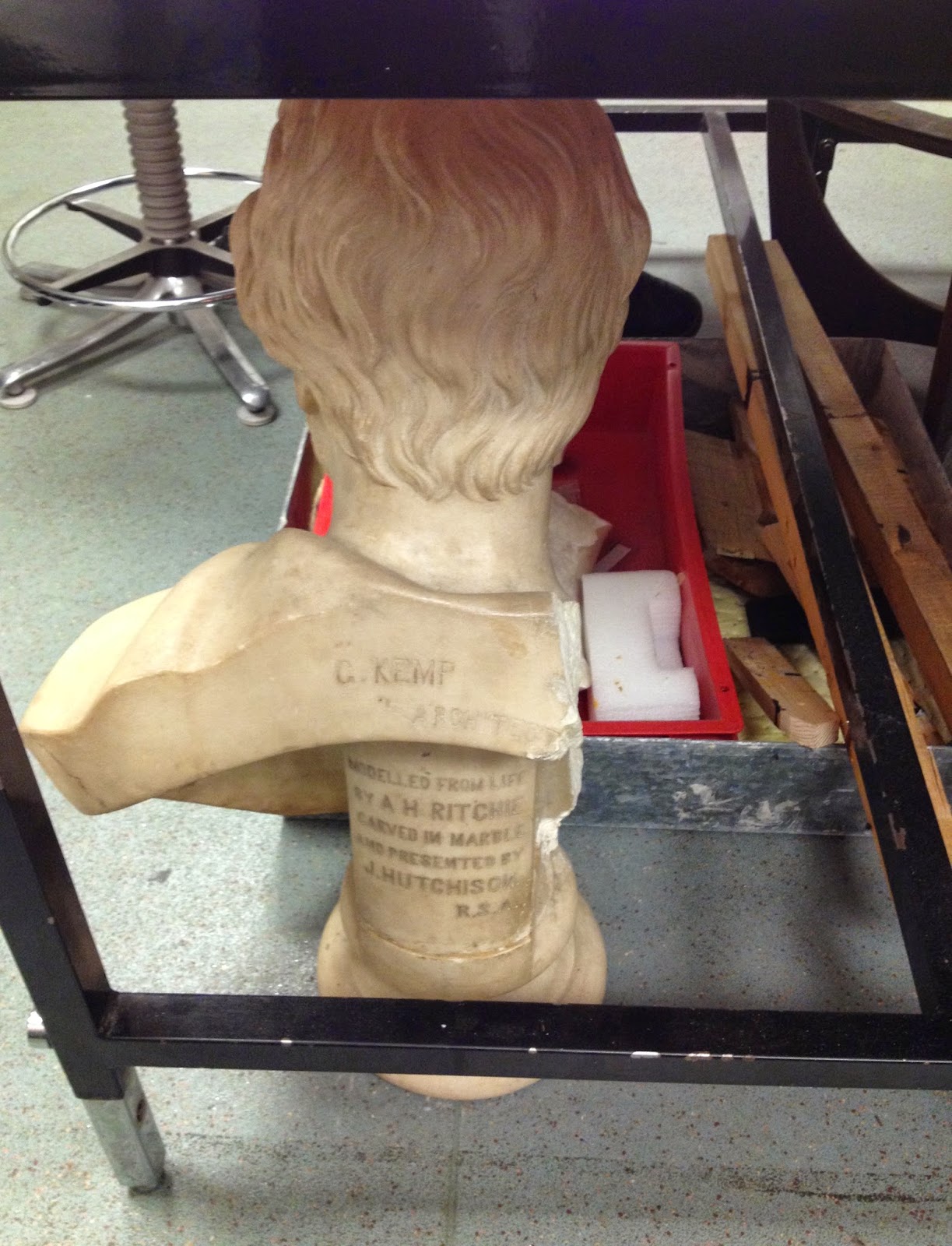 The store was a glorious mixture: This is an 18th century overmantel depicting a local legend featuring a ghostly dog. 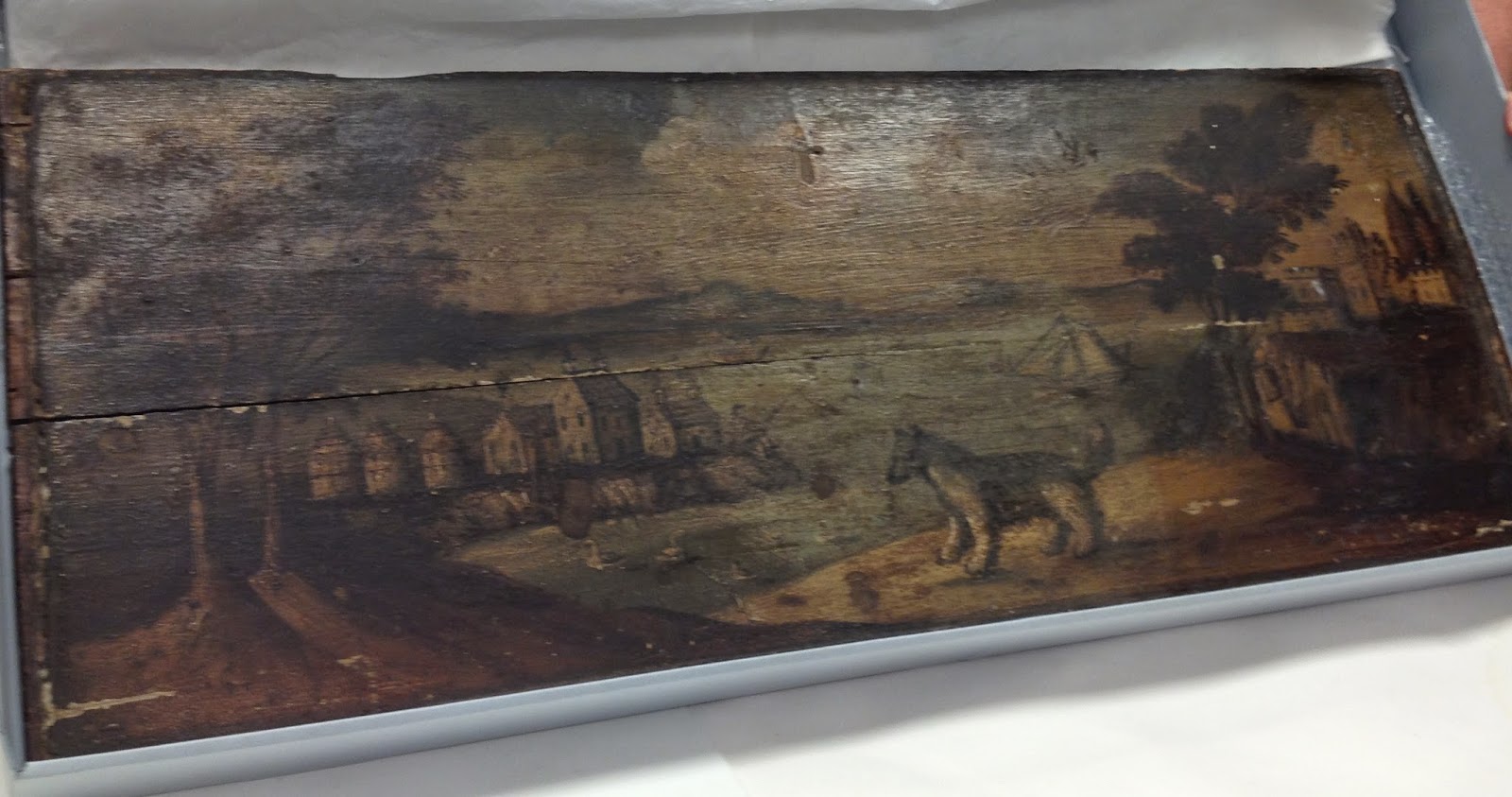 It (the picture, not the dog) was rescued from someone's coal cellar and donated to the city.
Not far away is a set of pantomime costumes -- so many were sent in by a theatre that many more have been passed on to local drama groups. 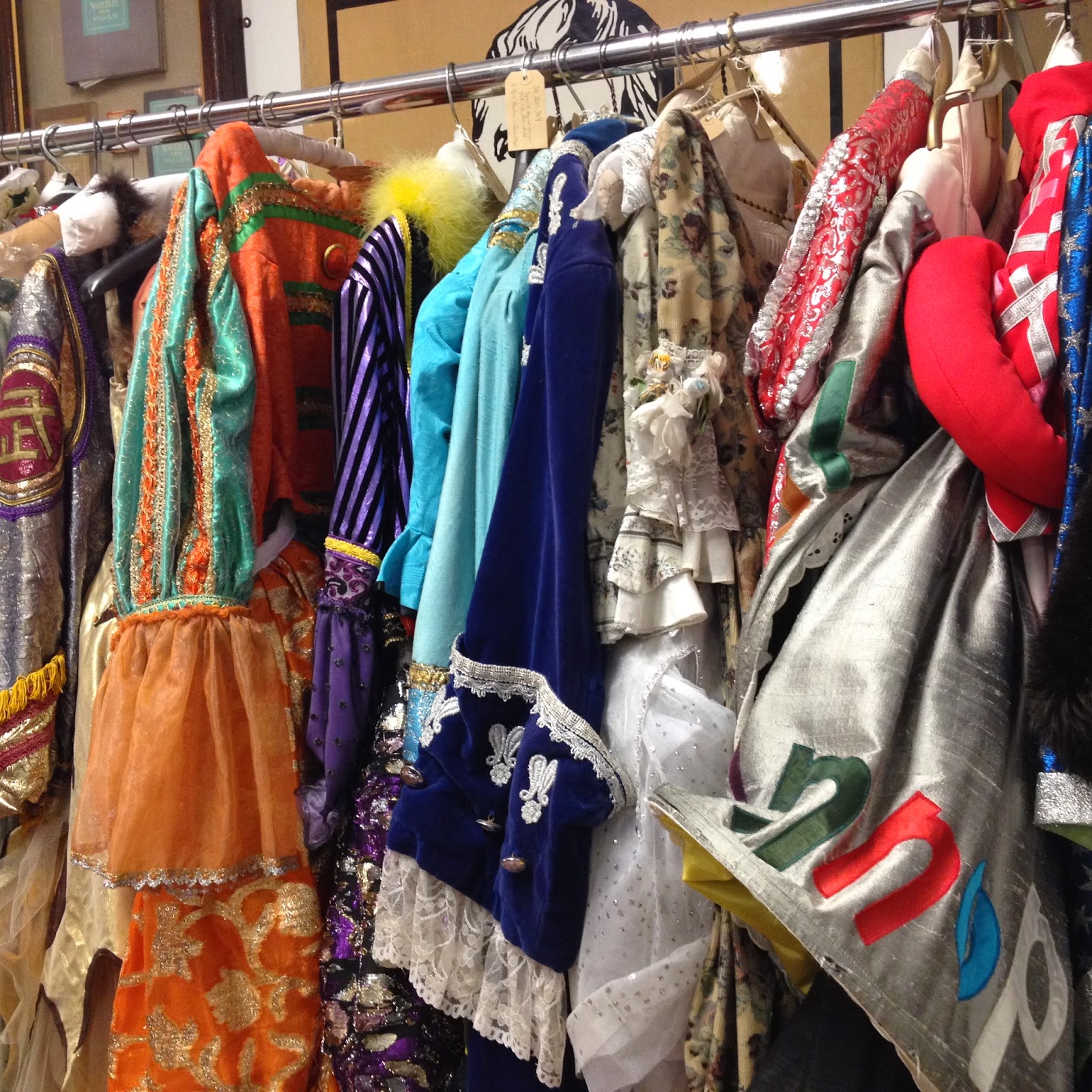 There are model stage sets sitting on top of a cupboard 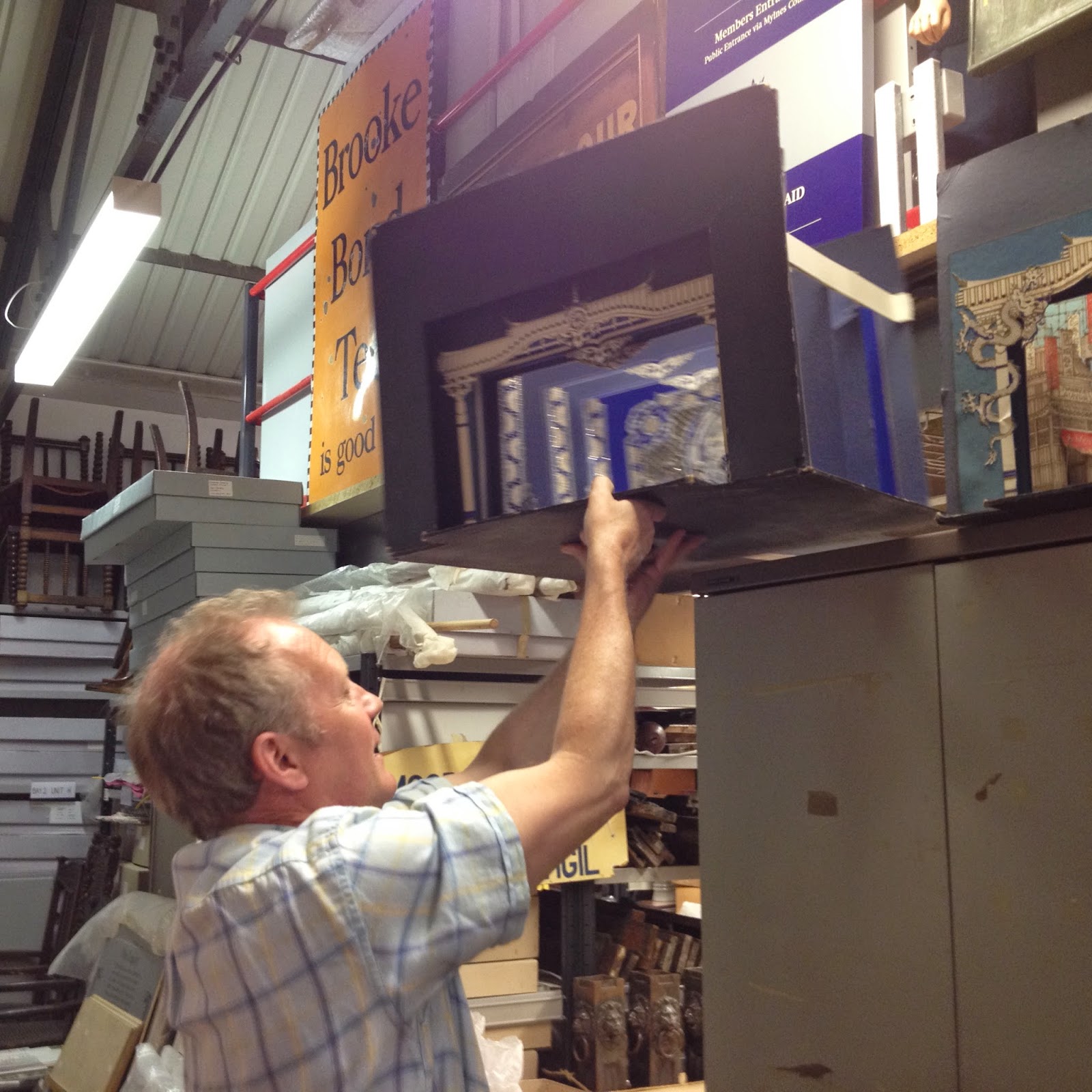 alongside this evidence of a rather enlightened (to my eye)
policy towards youth employment. 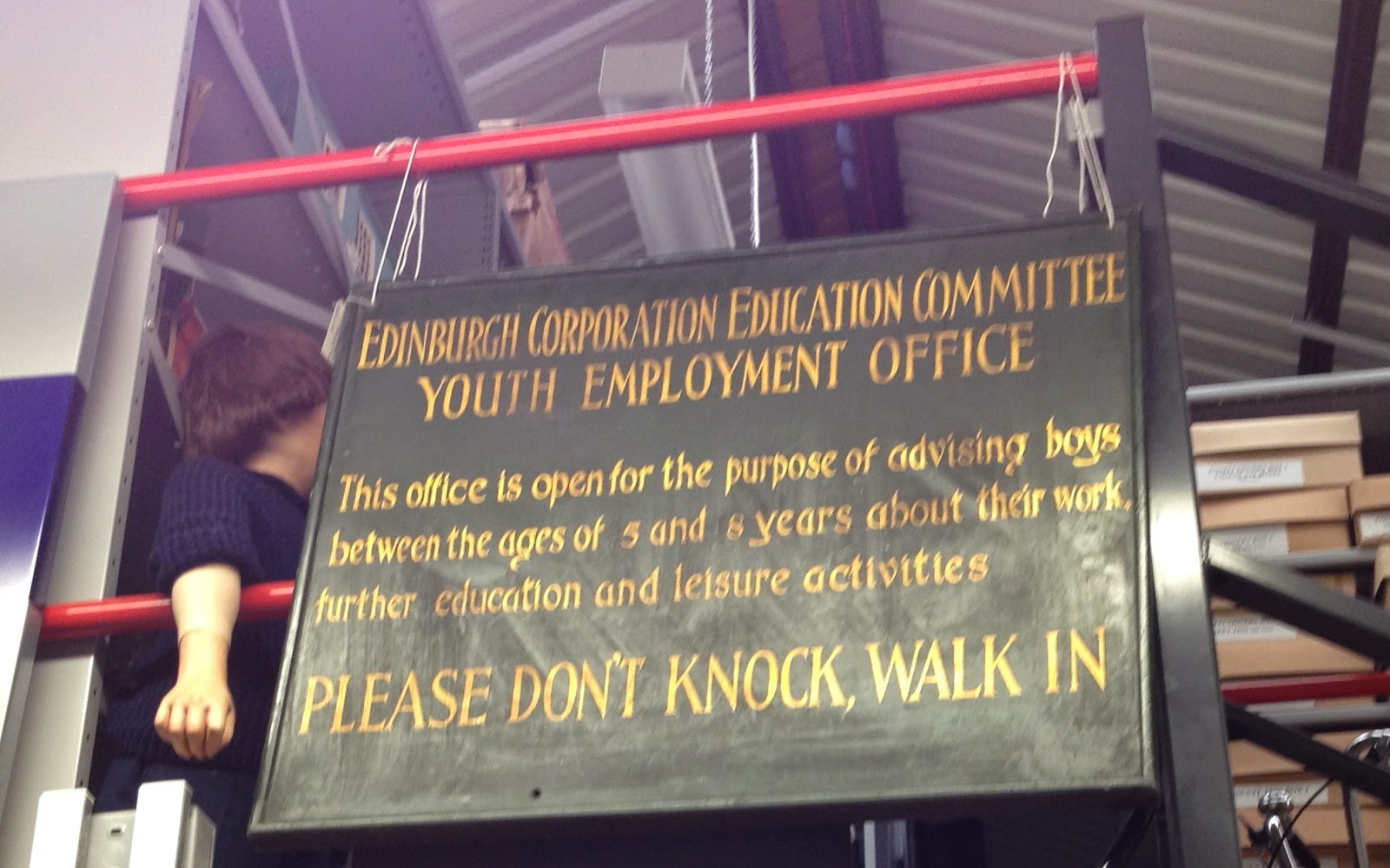 The numbers, by the way, should read 15 and 18 - some wag long ago blanked out the1s.  And the dead arm hanging over the rail alongside belongs to a mannequin from a defunct display.
Round the corner is a seventeenth century sign for the guild of Hammer-men. 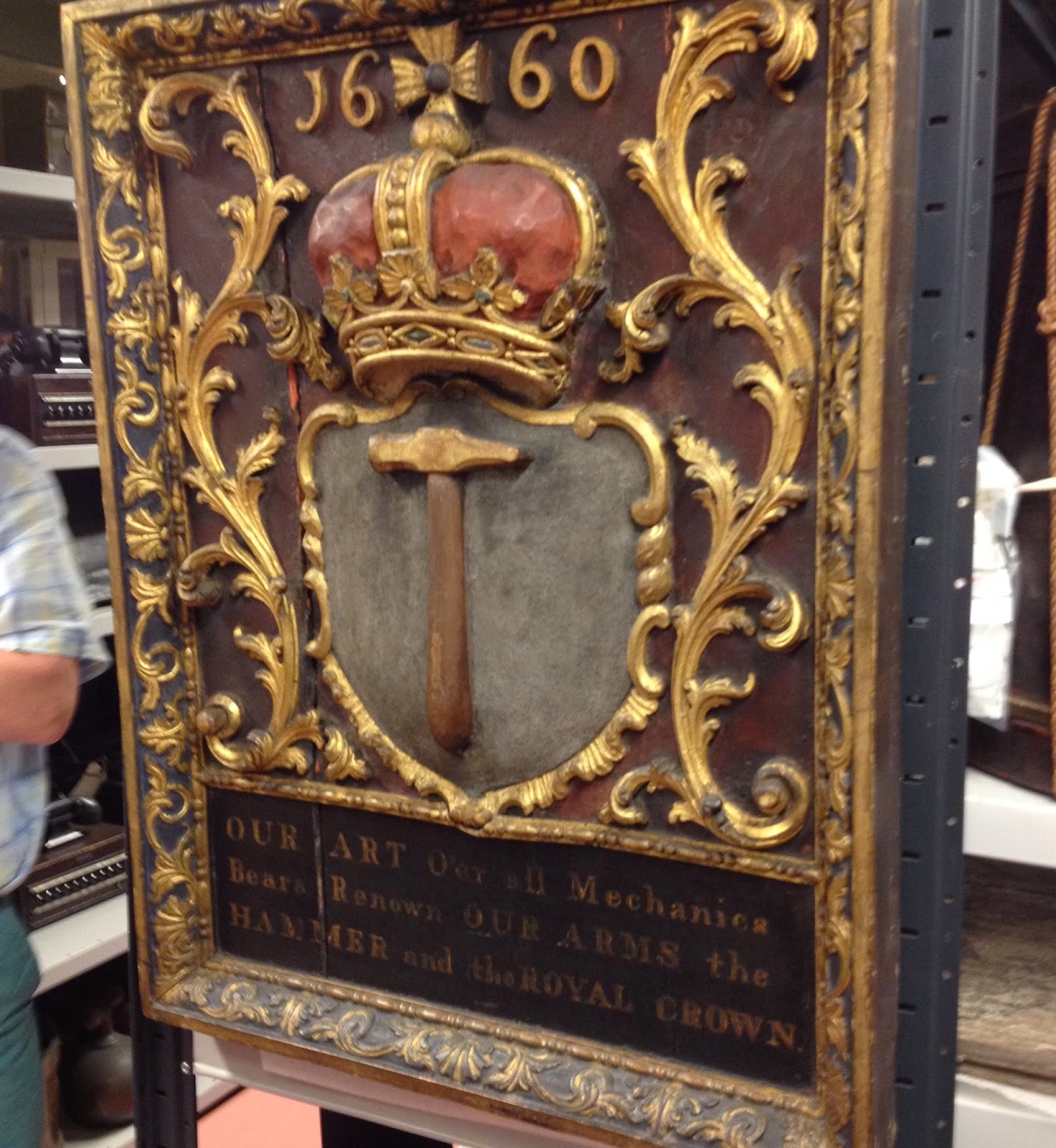 On the shelves behind that, there are radios, elderly computers, and even brown cardboard boxes of human bones dug up when they were preparing for the tram (which, incidentally, has no ventilation, is like an oven in the summer heat and - thanks to the scandalous budget over-runs - doesn't go anywhere near the burial ground that was disturbed to make way for it).

If I wasn't so old, I might have mistaken these hairdryers for ancient instruments of torture. 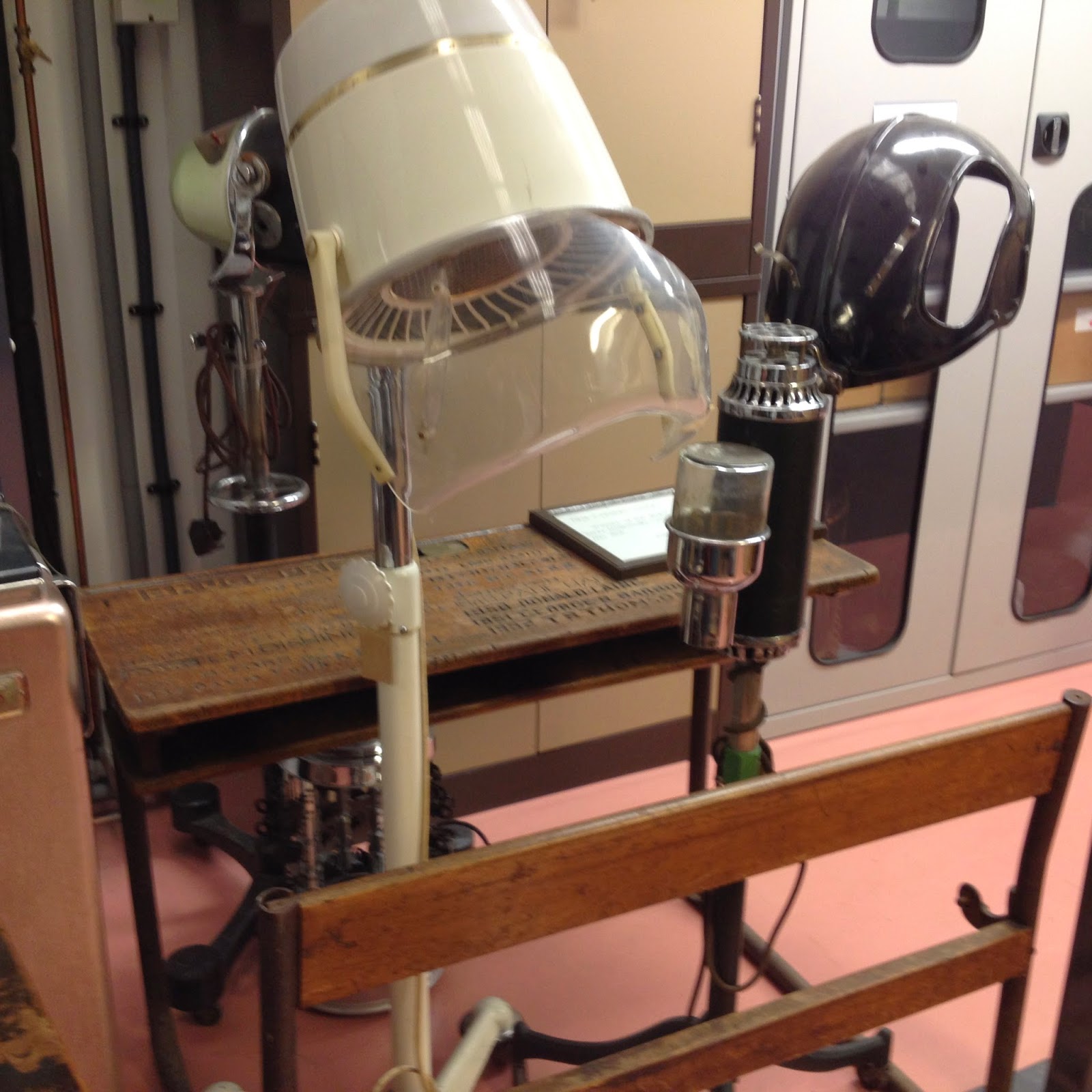 The council is still being given wonderful things. The original designs for the grand
Usher Hall have arrived from an architect's office in England. We were told that they include fine drawings for even the smallest detail of door furniture. They will go to an archive where they can be curated properly, and perhaps even (as originals or digital copies) displayed in the hall itself.


Of course, the city of Edinburgh is not alone in having so many exhibits that can't be shown. I wonder how much is in store at the National Museum of Scotland, which seems to pride itself on having acres of empty space, in the current fashion brought on by generous capital grants from the National Lottery. This money seems to have resulted in lots of exciting work for architects, but little for the back-room staff who might fill those spaces with interesting things...
But I'm a dinosaur. I like museums to be stuffed with the unexpected, and graced with labels explaining what you are looking at, where it came from, and why it's there. In the new world of cafes, push buttons, am-dram re-enactments and play areas, I have no hope of seeing that style of display come back in my lifetime, but I bet it will one day, along with employment and respect for the people who know about, and look after, the contents of our museums.
Until then, I'll rely on places like the Edinburgh Collections Store to cheer me up.

I agree - modern museum exhibits often display a great deal more style than substance. Part of the fun used to be nosing around the detail of cabinets & repeat visits were a necessity. Exhibits are now designed to be seen & understood at a glance, by a Public in perpetual motion on a predetermined route through the show. Leaving plenty of time for the shop, play area etc.

That sounds amazing! I would love to have a snoop around there.
Having worked in museums for a few years now - shops and cafes are a much needed way of getting funding for institutions desperately in need of money in order to pay qualified staff, run (often free) events, and sometimes even just to remain open. However, I did like the old displays too - I loved going to the old Kelvingrove in Glasgow and peering into all the old wooden cases.

I am looking forward to seeing some of those museums when we visit Scotland this autumn. Thank you.

I agree there was definitely a magic in the old kind of overcrowded galleries and collections, where you could ponder on your own explanations. For example, the large case of flint axe-heads in the London Museum looked impressive - but rather reminded me of a Damian Hurst installation, and I was sorry about that.