This film Belle, is remarkable for many reasons, it's directed by a black woman (and ex Grange Hill-er Amma Asante) it's historical and there is a woman of colour in the lead wearing what can only be described as Utterly Fabulous Frocks. These are the frocks of my nine year old dreams, the frocks that I longed to wear and now at last they're here larger than life and completely beautiful (as are the female leads by the way).

It uses the life of Belle as the starting point for a froth of romance and politics that entwines the case of the slave ship Zong  (a insurance scam in which ill slaves were drowned at sea rather than sold at a loss) with Belle's unusual social standing just as racism was being properly and fully industrialised. How fantastic to see another facet of British history bought to the screen in a stylish and entertaining manner.

I'm not going to give you all the history, safe to say Dido Belle was bought up as a lady even though she was illegitimate and mixed race. She did marry, but her husband was not a preachers firebrand campaigning lawyer but a steward and they lived in Mayfair, were married at St George's that lovely church just by Hanover Square and she was buried in the burial ground behind Connaught Square. 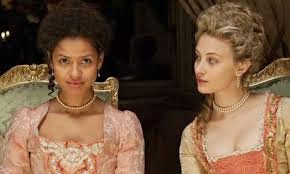 Did I mention the clothes? i think I did, and I had been looking forward to this film for a very long time. My mother went to see it and loved it and she has good taste I took my best friend, she wept buckets while I myself did manage a moist eye.

I think the team did an excellent job with setting and costume, no mean feat for a British (read low budget) feature. The performances by the female leads and the older generation - Miranda Richardson, Tom Wilkinson and Penelope Wilton were all brilliant, sadly I found the love interest and the evil suitor a little lacking.

It was not the art house smash that is 12 Years a Slave but I would recommend it most wholeheartedly. Belle combines rock solid storytelling and a very handsome look at class and race constraints in 18th century Britain. Let's hope this is the first of many such films that explore all our history. There are so many stories that are waiting for this sort of treatment.

Of course if you'd like to explore this period in a book I can offer you Sawbones! Which by the way won the Young Quills 12+ best historical fiction award earlier this week. And I shall leave you with the portrait of Dido and her cousin Elizabeth which inspired the film.

Catherine.
Posted by Catherine Johnson at 07:52

Sounds like a film to see. Many congratulations on your Young Quills, Catherine!

Belle sounds like a stunning film - I was afraid about seeing it and being disappointed so this is a good encouragement - but I have read Sawbones and it is definitely a stunning book, and well deserves the prize!

I LOVE that portrait, Catherine!

Kath it is unbelievably gorgeous isn't it x

I so want to see this film - and am very glad to see your favourable impression of it, Catherine!