A Visit from The Daughters of Time - Celia Rees

On July 1st, Catherine Johnson and I visited Cornelius Vermuyden School on Canvey Island to talk about The Daughters of Time Anthology and our stories, Return to Victoria (Emily Wilding Davison - my story) and The Lad That Stands Before You (Mary Seacole - Catherine's). 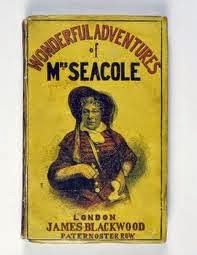 We were there as part of Pop Up http://pop-up.org.uk who had generously supplied copies of the anthology to the school. I had been at a Pop Up event earlier in the year, in the week that The Daughters of Time was published. I couldn't resist waving my publication copies and telling everyone about it in the schools I visited. I was talking in girls' schools in the East End and there was so much interest from staff and students that I ended up giving my copies to the schools involved. Teachers loved the idea of short stories about women in history and as an ex teacher of English and History I could see how useful such an anthology could be in the classroom (Note to publishers - schools LOVE short stories because they are, well, short and an anthology like this can generate an almost infinite amount of interesting work - of which more below).

Lest I start a gender panic, Cornelius Vermuyden is a MIXED school. Yes, boys were reading about women in history and YES, they were interested.

I think Daughters of Time is a great book for schools - as one of the teachers said some of the boys didn't notice they were all women until it was pointed out - it's short and interesting and lends itself to all sorts of discussions and questions.

Books don't have to be gendered, nor should they be, but that's probably a different blog. 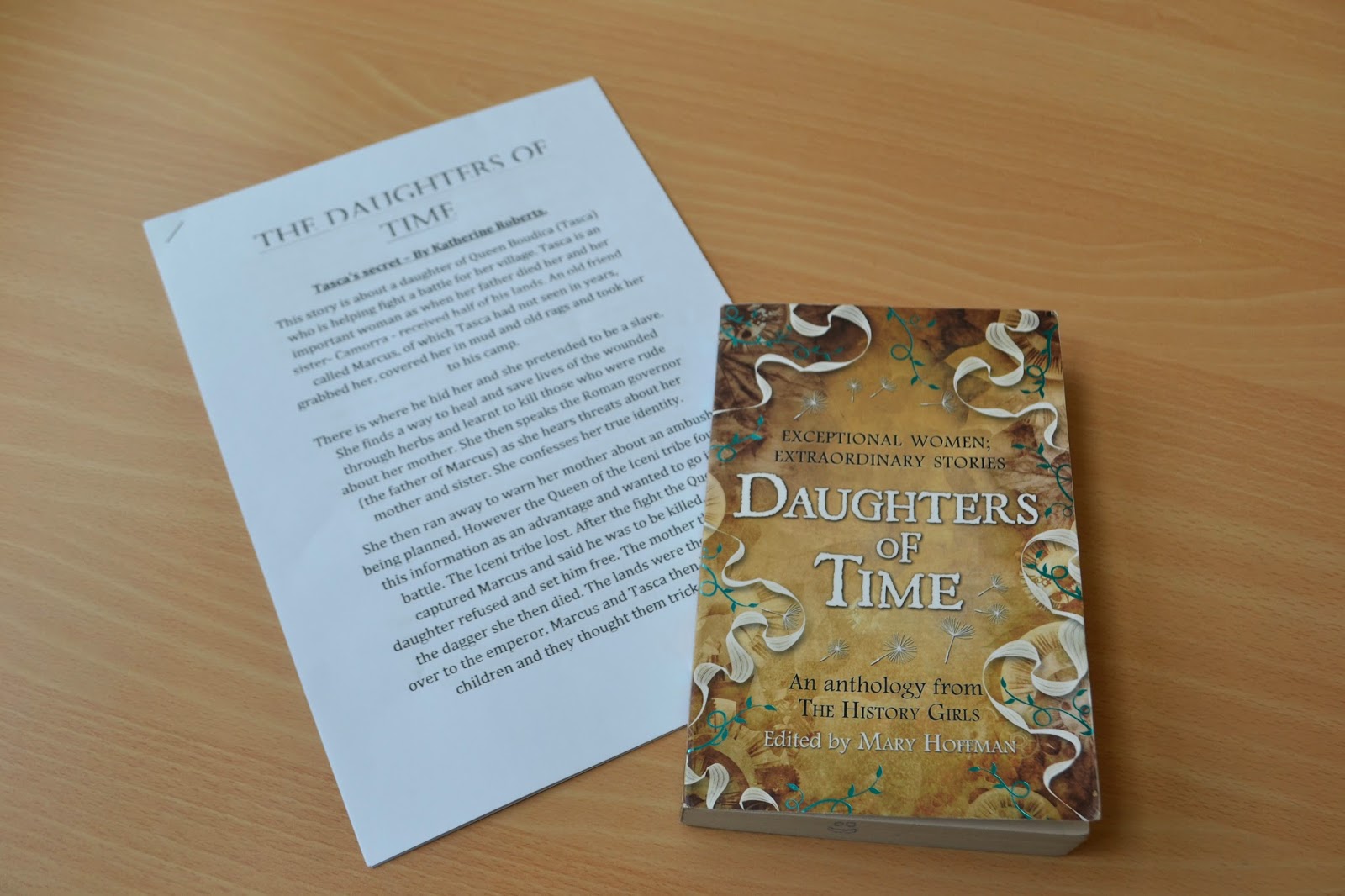 Gemma Holland, who was organising the excellent Pop Up events was at one of my sessions and thought that The Daughters of Time would be a very good book to include in the Pop Up programme. Coincidently, Catherine Johnson was visiting the very same school a few days after me and I mentioned that she was a Daughter of Time, too. Would we like to do a session together? Would we? Yes, we would.

The unique thing about Pop Up is that they supply the school with books, so the students have read your book and have done some work of their own. Both Catherine and I found this a transforming experience and we really enjoyed working together.

...the wonderfulness of talking to a group of students who have actually read the work being discussed. The thing that made these sessions different and completely refreshing was working alongside another author ... having someone to bounce off, to share and explore ideas with alongside the students was brilliant and added, I think, an extra layer of depth to our talks. I wish all my author visits could be conducted like this. 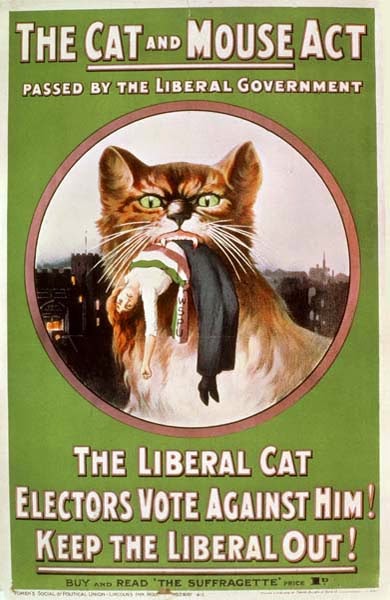 Both our stories led on to wider discussion and because the students had read the stories and completed work based on them, we could have a proper debate. This was education in its truest sense. These children of 2014 were shocked that women could not vote and horrified by the treatment of suffragettes under the Cat and Mouse Act. We could have been there all day talking about whether Emily Wilding Davison meant to cash in the return stub of her train ticket or cash in her chips. I very much appreciated the contribution from one young man who knew his way around horses and who explained to us exactly what would happen if someone stepped out in front of a horse at full gallop. His expert knowledge brought the debate to a close.

Things were no less spirited when it came to Catherine's story. The students were equally shocked by the racism, endemic in the 19th Century, that prevented Mary Seacole, although eminently experienced and qualified, from serving as a nurse under Florence Nightingale in the Crimean War. They practically cheered when Catherine described how Seacole went anyway and set up her own hospital, The British Hotel, practically on the battlefield.

They were also taken aback to know that boys, the same age as those sitting in the audience, served as soldiers and that women sometimes went to war disguised.

The discussions ranged far beyond the confines of the stories we had written. As Catherine says,

One reaction I will treasure is the surprised look on the last class of Year 7s when they heard women only achieved equal pay recently!

It was a fantastic day and one we will both remember.  For it to be as good as this, a great deal of work had to be done, by the Pop Up team who made it possible, but also by Sue Goldsmith and the teachers at Cornelius Vermuyden School, who showed real commitment to the project, and not least by the students themselves who showed such great interest and such imaginative responses to the short stories in the anthology. Their creative work was really impressive. 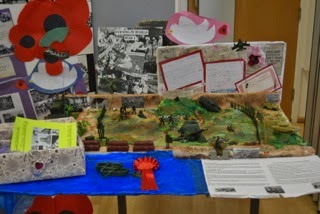 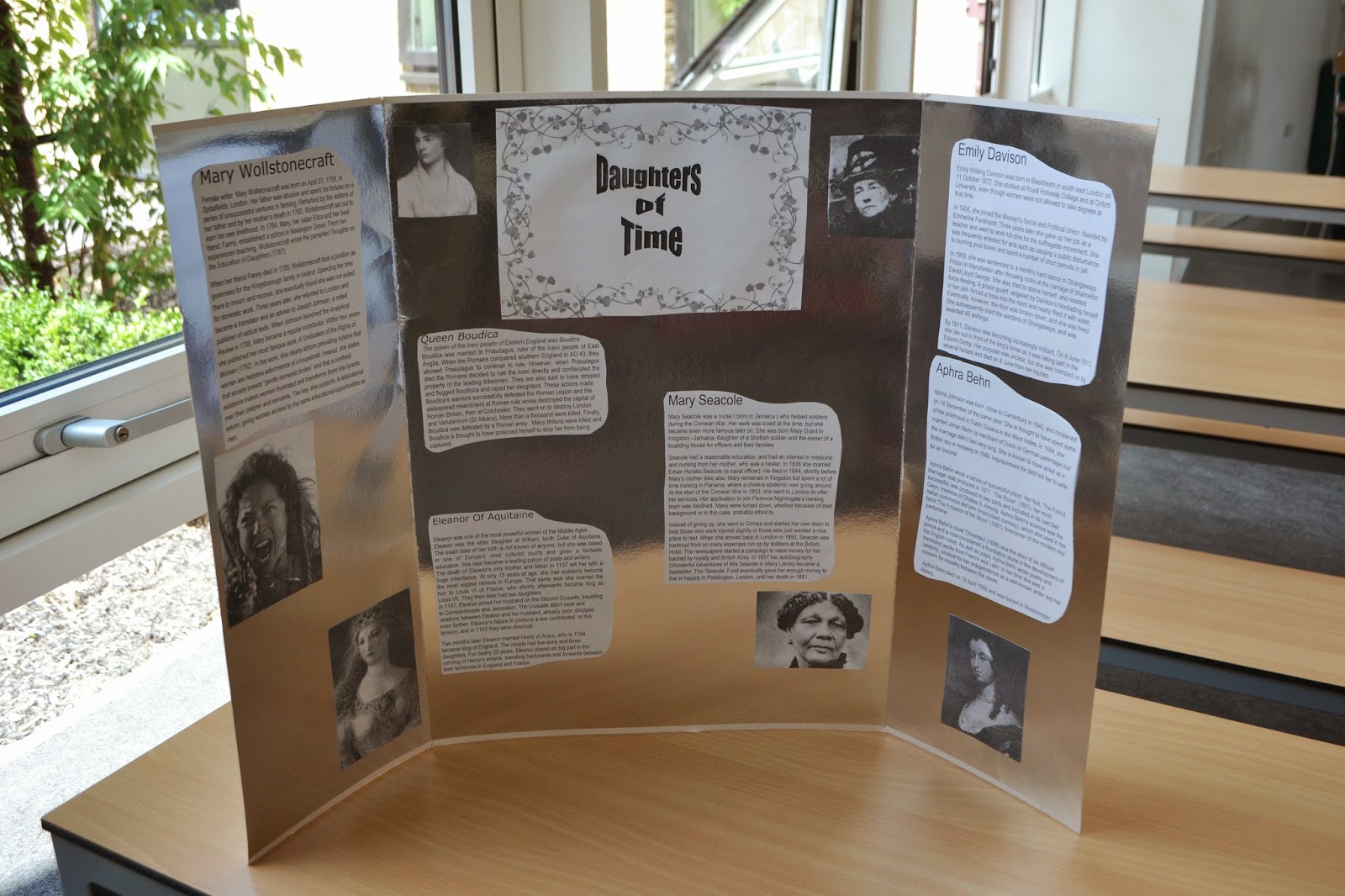 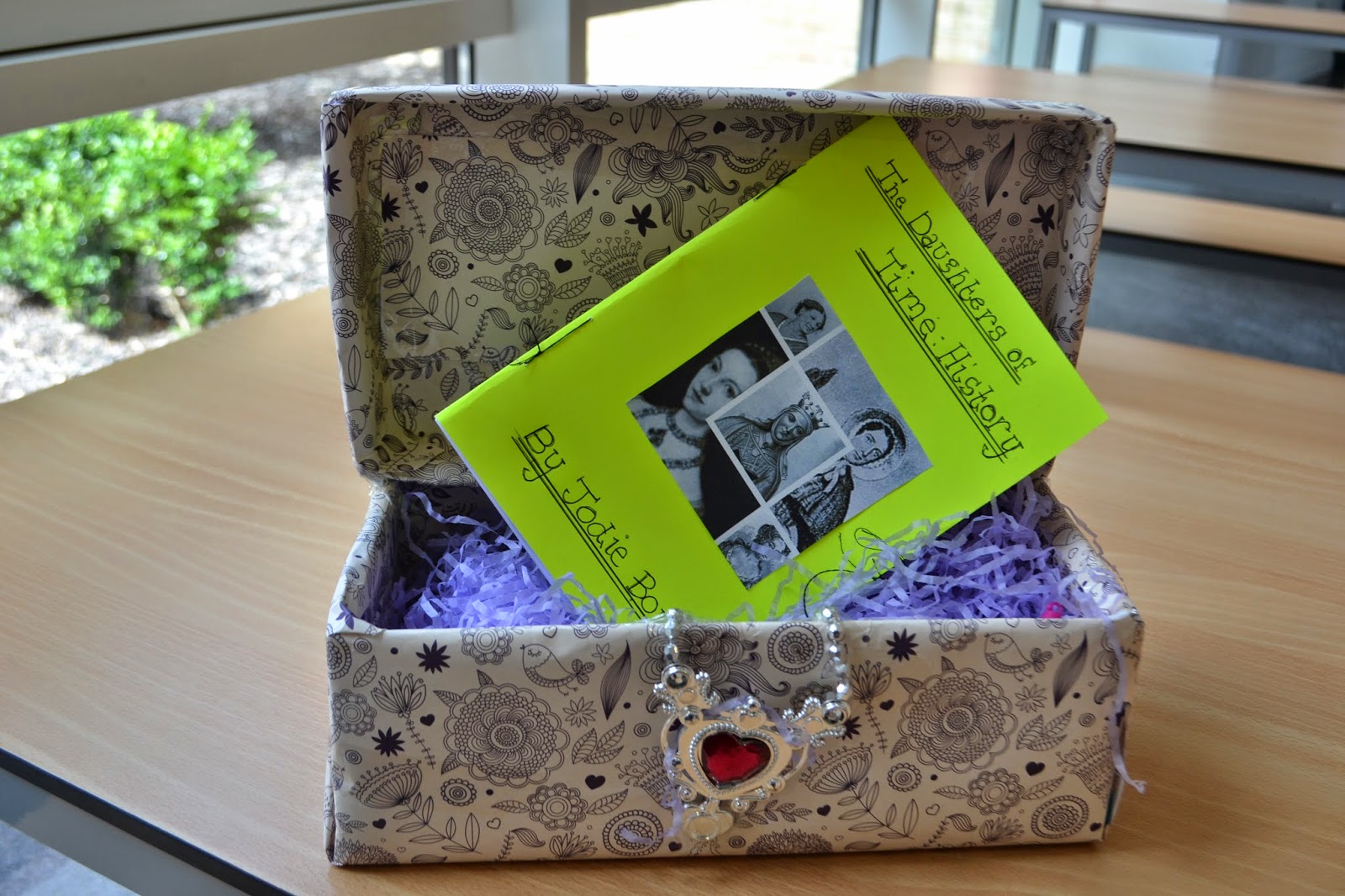 I just wanted to let you know that our Home Project event was brilliant and the presentation last night was lovely. The work the students had done was really stunning.

The students are still talking about both you and Catherine. It has really given the text meaning. My year 7s talk about you guys as if they've known you for years.

One student actually made Mary Seacole [see above]. Catherine had said that she used to be little known in history, she is very well known by our year 7.

The Young Quills Award for Historical Fiction for her novel, Sawbones.

What a super post! And well done to Catherine for her YQ award!

Sounds wonderful! I remember some years ago going to a school where they'd read my first book, Spook School, and they had a display up - it was such a thrill. And they had such good questions.

What an amazing school visit and indeed amazing school! I'm so glad that it was a success and that our anthology is proving so stimulating.

Congratulations on your award, Catherine, and congratulations to you both for stimulating and exciting youngsters to read and create. Great post.

This is a really interesting post. The projects all look fantastic! I'm sure the year 7's got a lot out of it :)

What a joy to read about such a successful project and HG author visits.

Well done to you both, but especially well done to Cornelius Vermuyden School, for showing the benefits of working with the author visits. And hooray for "Sawbones", of course.

Immensely encouraging! This is exactly how history should be taught. Well done!

It was really exhilarating to visit a school where they had really embraced the book and put so much behind it. It made our visit really meaningful. And it was great to work with Catherine. Rolls Royce visit!
The young horseman said that the horse would immediately rear, Sue, kicking the person, throwing the jockey and then overbalancing. I haven't checked on the film footage - it would be interesting to see iif he was right. He spoke with some authority - I love it when kids can tell you something you don't know!

Great post! And great to think of boys reading the anthology.