ONLY REMEMBERED ~ ‘Powerful words and pictures about the war that changed our world.’

This line is from an extract of a recently discovered diary of an unknown French soldier as he goes off to war and into action in 1914. It was chosen by Michael Morpurgo as the first item in his anthology Only Remembered 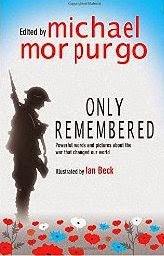 It’s quite apt for me to choose to write about this book for my blog this month because this is the last blog I’ll do as one of the History Girls – a farewell post from me.

One hundred years have passed since the outbreak of the First World War. To mark the centenary Michael Morpurgo has compiled and edited favourite words and images about the Great War from some of the UK’s leading cultural, political and literary figures to create a beautiful anthology illustrated by Ian Beck. Royalties from each book sold will go to the British Legion and SSAFA who provide lifelong support for forces and their families.

In setting out to create the anthology Michael’s wish was that such a profoundly important period would continue to be related to young people in an accessible and relevant way. But this book is for all ages and relevant to everyone. Poems, short stories, personal letters, newspaper articles, scripts, diaries, photographs and paintings are just some of the elements of this unique collection – each introduced by the person who selected it.

Speaking of Oh, What a Lovely War, David Almond talks of honouring the decent ordinary folk who go to war.

Malorie Blackman writes of the brave heart and fighting spirit of Walter Tull, the mixed-race son of a Barbadian carpenter and a white English mother. A professional football player who joined the British Army at the outbreak of the war he became a highly regarded black officer, the first to lead white men into battle.

Quentin Blake’s father was a surveyor’s clerk for the Imperial War Graves Commission and his parents lived in France for 10 years after the First World War. He has a simple but telling memory of his father remembering his friend who dies in the conflict.

Anne Fine gives us the source of her own book, The Book of the Banshee, based on the diary of a young man who lied about his age in order to join the Army, and tells of the challenge to make her book into a comedy.

Shirley Hughes has chosen John Singer Sargent’s painting Gassed. (Worth a visit to the London Imperial War Museum to see that alone TB.)

Welsh poetry that moved me to tears was selected by History Girl, Catherine Johnson.

Jonathan Stroud has given us an extract from the diary of his great-grandfather on Armistice Day, 11th November 1918.

In my entry I write of how the war affected young children on the Home Front – our youth who became the future. Photos of my research materials show the contrast between the newspaper reports of the first day of the Battle of the Somme and the diary entry of an officer who was actually there and watched his men go forward.

The above are a small selection of a book packed with magnificent content – a fascinating mixture of impressions and thoughts plus some useful information e.g. a Timeline and Websites.

Some time ago Michael Morpurgo stopped to look at the grave of a young British soldier, who’d been killed in 1918, two weeks before the end of the Great War. Michael refers to this in relation to the book, this soldier being one of the ten million soldiers killed on all sides:
‘Most never grew old enough to know and be known by their children or grandchildren. This book is made for them; for all of them.’
He goes on to say: ‘Here in this book you will find the truth, which comes in many guises, in history, in stories, fictional and non-fictional, in poems and songs and pictures.’

The Introduction to the book is entitled:
WHO’LL SING THE ANTHEM?
WHO WILL TELL THE STORY?

This seminal anthology Only Remembered answers these questions.

I am feeling quite sad to be writing this post, not only because of the subject matter, but because it is my last post for this Blogspot as a History Girl. Commitments, personal and professional, have meant I have had to resign but am cheered by the fact that it means creating a space to give a platform to another new voice waiting to be heard.
From the very first moments of the start-up party I’ve loved being a History Girl, and through the years it has been terrific to experience our comradeship and support for each other – not least the Admins who had to bail out Techno-Idiot me on several occasions. But, of course, main praise to the main person - the ever indefatigable Mary Hoffman who has been the inspiration for all of this. I’ve read posts which were poignant, thought-provoking, insightful, quirky and humorous and learned a  LOT more history! Thanks to all HGs.
NOTE:  Theresa Breslin is appearing at the Edinburgh Book Festival on 13th and 19th August 2014.
http://www.facebook.com/Theresabreslinauthor     Twitter: @theresabreslin1
http://www.theresabreslin.co.uk/
Theresa Breslin writing on WW1:
NOVELS:                   Remembrance        Ghost Soldier
CONTRIBUTOR:       War Girls                 Only Remembered
Posted by Theresa Breslin at 00:30

This is a very moving post. We have never met, Theresa, but I am one of the new girls and am definitely a 'Techno-Idiot' who has already been bailed out twice. I wish you bonne chance with your work and commitments.


Ah, thanks for your comment and good wishes Carol. I'm sure you'll find the practical and emotional support from the HGs as uplifting as I did.

Thank you,Theresa, for this post and all your other ones in the past which have been such a pleasure to read!
Good Luck for the future. I shall certainly read Michael Morpurgo's anthology and plan a trip to the Imperial War Museum!


Thanks Jean - The anthology is a great book to dip in and out of. I've only read about half of it so far. What stops me moving on more quickly is that I keep going back to bits previously read, especially the poetry.

Will definitely get a copy of this, Theresa. You will be much missed!

Thanks for all your posts Theresa, sorry you're leaving x


Thanks Sue and Catherine - hope we meet up sometime soon!


And I'll miss YOU Caroline as it was you who most often fixed my erring posts! Hope to see you again at some BookFest or other. I have a lovely memory of you in full cowgal gear enthralling children in a tent in Edinburgh.

All good fortune in everything, Theresa! Have loved your posts and will continue to be in touch away from this lovely blog! Thank you for all the pleasure you've given us.

Thank you for being a History Girl, Theresa - one of our founder members! We shall miss you and hope you'll drop in from time to time to read and comment. All good wishes for the future professional and personal.


Many thanks Adèle and Mary. Will definitely stay in touch and drop in on History Girls regularly.