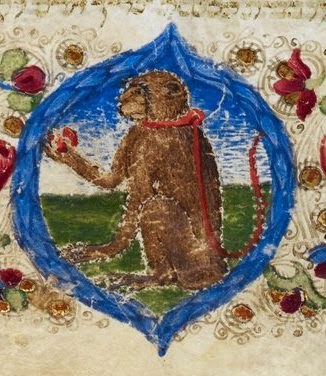 In 1158, Thomas Becket, chancellor to King Henry II set out on a diplomatic mission to France aimed at promoting a marriage alliance between the two royal firms, and also one suspects  playing a game of 'mine's bigger than yours' between Henry II and King Louis VII.   Rather like modern commercial trade promotions, Becket arrived in France with a cavalcade that reflected all the riches of the empire over which his master was lord.  The circus had come to town and announced its arrival with music and fanfares.

The entourage consisted of over two hundred mounted followers to add dignity to Becket's standing, among them knights and pages, clerks, stewards and servants, all of them arrayed in costly garments. Becket himself had twenty four changes of clothing, most of which were worn once and then bestowed as gifts. He had several packs of hunting dogs with him and various birds of prey from his mews.

There were numerous baggage wagons each pulled by five horses in line. Each horse had a groom and each groom had a mastiff dog as big and strong as a lion to guard the wagon.  Two of the wagons carried barrels of  ale for handing out to French bystanders who were not familiar with such a beverage. The rest of the wagons contained more food and drink, cushions, bed linens, furnishings, and various other items of household paraphernalia - all high status and embellished.

Beyond the wagons came a caravan of twelve packhorses laden with the most valuable items - books, gold and silver plate, the items of Becket's chapel, basins, spoons, salt cellars, rich vestments.  Each packhorse once again had its groom, and on each pack animal's back, a monkey had been trained to sit like a little jockey.  The monkeys themselves were intended as gifts for the French high nobility and clergy.

While researching and writing my forthcoming novel THE WINTER CROWN due out in September, I tried to imagine what it would have been like for the people who had to gather together this menagerie - the sheer logistics of assembling all the different aspects, and then transporting it across the Channel.  It must have been daunting but from reports in the chronicles, it appears to have succeeded and been one of the wonders of its age.

A scene in the novel required me to write about one of Becket's monkeys.  Not being a subject I had covered before in my research, it was interesting reading up on the background of such creatures in medieval daily life and I thought I'd share some of the information I came across.

When Medievals referred to monkeys they meant both the tailed and the untailed - they didn't differentiate between monkeys (tailed) and apes (untailed) as we do.  Tailed monkeys were the one of choice though and seem to have been widely available in Western Europe in the twelfth century.  They were popular bets, especially among members of the clergy, although not everyone was enamoured, and Hugh of St. Victor was of the opinion that they were 'filthy' and 'detestable.'  Scholar Albertus Magnus in his De Animalibus opined that while monkeys might play with other pets, they should never be viewed as completely tame and could be dangerous.  He calls it 'a trickly animal with bad habits.'  He describes monkeys as eating vermin  found on people's heads and clothing.  However, when not dining off their owner's parasitic occupants, monkeys would be fed a variety of foodstuffs, but nuts were a staple. Chronicler Richard of Durham reported on Robert of Coquina, Bishop of Durham 1274-83 who kept two spoiled pet monkeys that he fed on peeled almonds from a silver spoon. 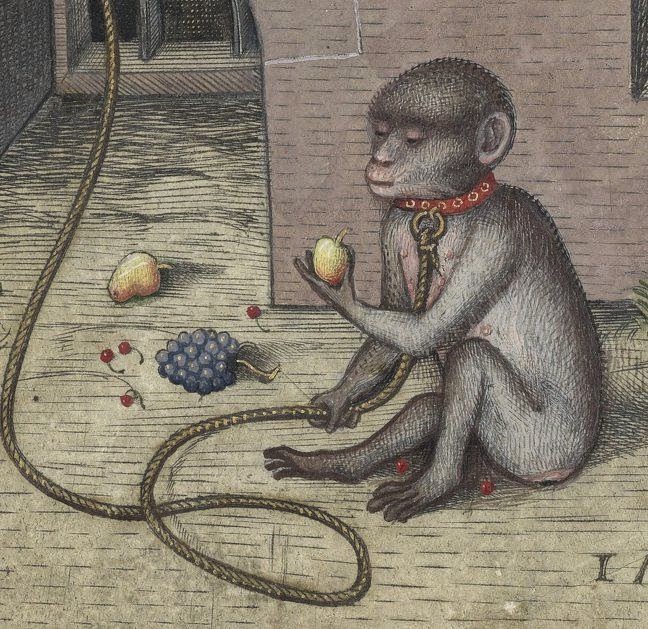 Monkeys could be tamed by being chained to a heavy block, and they invariably wore a collar and chain. They were, of course, a high status pet to have and were frequently given as gifts, being seen as particularly suitable for clergy and women.

I was also interested to find out that animals in the Middle Ages, while having personal names, also had generic ones.  Redbreasts were called Robin, pies were called Mag, Wrens were called Jenny.  Tomcats were Gyb and monkeys were Robert.  I enjoyed making use of that detail in the novel!

Monkeys are ubiquitous in medieval imagery where frequently it is a symbol of sin, malice, cunning and lust -all the baser elements of humankind. They also stood for folly and vanity.- although none of this prevented them from being the popular pets of clergymen - perhaps as a constant reminder of the sins and follies of mankind!  It is ironic that Thomas Becket, a future Archbishop of Canterbury and martyr-saint should have travelled to Paris with twelve such in his entourage!

I am fascinated to read about these monkeys. How did they first get to England? Were they from Spain/Gibraltar? Elizabeth, do you know why their generic name was Robert?
I have just been trying to find some answers to these questions and found the Wiki page about the hanging of a monkey off a French ship in Hartlepool. http://en.wikipedia.org/wiki/Monkey_hanger
Your post has set my mind whirring with questions. Thank you

Lovely post - thank you. It's plain that Beckett could have taught our modern celebrities plenty about bling and show!

Carol - thanks for your interest! The tailed ones came from West Africa via the trade routes - while transportation wasn't the fastest in the world it did cover wider areas than we sometimes think on a regular basis. Barbary apes, the Gibraltar type were also known and made pets of - and baboons were known of also - and used in bestiaries as symbols of lasciviousness! I don't know why the generic name was Robert - one of those things I think. A common popular name. I don't know why all readbreasts are Robin either other than that. Interesting about the hanging of the monkey. At one time there seems to have been a spate of that kind of cultural behaviour. I recall a pig being hanged too!

Great article, Elizabeth!
I read of animal hangings in the 17th century, all connected with bestiality. They would execute the animal victim of the sexual assault and refuse to use its meat or other products because a man's sperm had entered the animal, and they'd be cannibals now.
Perhaps the ship monkey did what monkeys did, and stole food or valuables. Or it was molested by a man. Poor thing.