My book of the year by Imogen Robertson 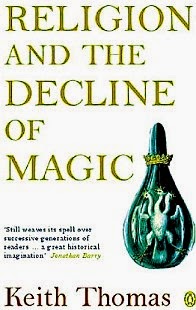 Religion and the Decline of Magic by Keith Thomas

Anyone still looking for Christmas gifts? Of course not, you are all far too well organised, but perhaps you still need something to read in front of the fire until the sun comes back. Religion and the Decline of Magic by Keith Thomas was first published in 1971, so I know this is cheating, but I only read it this year and if any you, dear readers, haven’t read it yet, may I suggest you do so as soon as possible?  It is an absolutely stunning work rich and insightful and makes most other history books seems a little thin by comparison.

Its subtitle is 'Studies in Popular Beliefs in Sixteenth and Seventeenth-century England' and that is as good a summary of the content as anything I could come up with. If you are interested in how people thought and felt four hundred years ago, you will be utterly transported. Every page is filled with the voices of people, anecdotes and story fragments that both intrigue a reader and come together to construct a portrait of the period that is both complex and comprehensible.

It is a wise and human account of a time that I’ve found difficult to come to grips with in the past. The people of the 18th century feel familiar to me in their outlooks and beliefs - not completely perhaps, but I felt I was adapting my own attitudes when writing from over their shoulders as I do in the Westerman and Crowther series, not transforming them. When I read about the Civil War however and the religious maelstrom under the Tudors, I was rather at a loss. There was clearly such a profoundly different way of understanding life there, and I couldn’t get a grip on it. It felt slippery, impossible. Then I read Keith Thomas it was as if someone had broken a window and let the light in. I gained an understanding of how magic and the medieval church were intertwined, and how the unravelling of folk and establishment beliefs were uneasily accommodated within communities.

I think I shall read it again over Christmas, by the fire and with a large glass of wine while the dark presses at the window and the witches and spirits have the lanes to themselves.

Have a wonderful Christmas all.
Posted by Imogen at 00:30

It sounds as if it would be very useful for writing historical fiction. There are so many things your characters in historical novels just wouldn't do because they thought differently, saw life differently. And people keep writing them doing and saying these things.

I've found it in ebook, but the download is rather large for my little iPad, so I'll see first if my local bookshop can get it in. It's Penguin, so shouldn't be too hard to find.

Intriguing! The 16th and 17th centuries are later than my period of study but even so one can always extrapolate. My go to book for this is Richard Kieckhefer's Magic in the Middle Ages, recommended to me by a historian. This one sounds like a good companion.

Thank you for reminding me of this book! I read it many years ago and after reading your post I jumped up and scurried around till I found it again. It will be essential re-reading for the story I'm working on at the moment.

Thank you, Imogen for this recommendation. And Elizabeth, too for yours. Both are perfect reading choices for me for my current and next(!) writing project.

I used this book at university in the 1970s and I'm delighted that it is still in print. I've just looked inside my copy for the first time in years and discovered a yellowing article about Keith Thomas from New Society in 1983. I met him when our lecturer invited him to come to talk to us, probably the first time I ever met an author. Thanks for inspiring this exercise in nostalgia!

Thanks, folks! Glad it's such a friend to all of you too. Liz, you'll love it. I just bought Magic in the Middle Ages as well, looks fascinating. (Rubs hands together). Well, if the next book doesn't go well, I'm all set up to be a cunning woman now. Ix

Are you not already cunning Imogen? I was entranced by Harrison Ainsworth's Lancashire Witches when I was at school, but doubt it is on many reading lists now. Happy Christmas all x

I read it when I was researching Malefice years ago. I did find it useful though not the most useful on the topic of witch beliefs. But what you said about looking over people's shoulders is interesting. I felt I couldn't read about witch beliefs without going under their skins and seeing the world the way they saw it 'a different kind of reality' as a friend who'd spent a year travelling in South America said about Gabriel Garcia Marquez. But a book I found excellent was The Elizabethan World Picture. I can't remember the author, but do recommend it. It casts a lot of light on Shakespeare too; and the religious problematic inherent in a Hamlet's father's ghost