A PARADISE FOR MARRIED WOMEN by Eleanor Updale

I have a good friend with a gift for finding the perfect book. A few weeks ago she appeared with a slim volume that had been languishing in a charity shop: Life Among the English, by Rose Macaulay.
Yes - THAT Rose Macaulay, the author of The Towers of Trebizond.

This little book, published in 1942, was one of a series published by William Collins of London, aimed at capturing, for a wartime readership, the essence of the Englishness they were fighting to preserve. 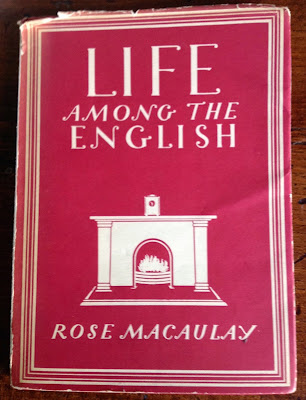 Each book was very short - in this case, just 48 pages - but the list of authors is impressive. Graham Greene was signed up to do British Dramatists, John Betjeman British Towns and Cities, and John Piper British Romantic Artists. 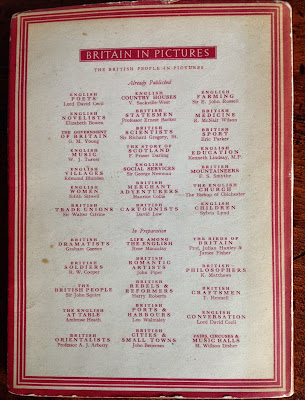 It fell to Rose Macaulay to romp though English social history from 'the first two or three centuries AD' to the middle of the Second World War.  What a daunting task. But Macaulay launched on it with spectacular verve, right from the start. Here's the opening:

Owing to the weather, English social life must always have largely occurred either indoors, or when out of doors, in active motion.

Macaulay's voice is one of the prime attractions of the book. Any modern academic historian would have little difficulty finding 'facts' to quibble with, or quotations infuriatingly unsourced, but who could fail to enjoy forays into mind reading, and tongue-in-cheek passages such as this vignette of post-Roman Britain:

....toga-wearing Celtic chieftains whose wives vainly aped Roman manners, but seldom went so far as to use the fashionable baths in their courtyards and did not really grasp the plumbing system (possibly some Romans, if they at all resembled Romans today, did not grasp it either).

The Dark Ages and the Medieval period are crunched into one (much as they still were when I was at school).  They are summed up as having provided:

A full life for both men and women, and if one adjective had to be selected to describe it, perhaps the aptest would be 'quarrelsome.'

The book really fizzes into life when it gets to the Tudors. Like so many history books, this one tends to describe the manners and lifestyle of the upper classes as if they pertained to everyone, but most of the time, Macaulay catches herself when she falls into this trap. What she is remarkably 'modern' about is her concentration on the lives of women -- and for most periods she portrays them (especially those who were monied and married) as having had a pretty good time, quoting a Dutchmen who saw England as The Paradise of married women...Their bodies satisfied and their heads prettily mizzled with wine.

Lack of space drives Macaulay to almost poetic concision.  Here's how she opens the section on the Stuarts:

We slide, with the seventeenth century, into a gentler, less rampageous age; socially more civilized, intellectually less at the boil, but more adult.

Amidst the racy detail of fashions in clothes, food, learning and manners, the message throughout this little book that people, and especially social climbers, don't change. And though Rose Macaulay inevitably sticks with the standard narrative of events, she does challenge some clichés.  For example, she rejects the idea of a crudely polarised clash of cultures in the run up to the Civil War.

There were then, as now, a hundred different Englands. Through one recorder's eyes we see frivolous court-goers, scent-soaked, ornament-hung, wearing little mirrors in their hats, crowding round gaming tables and drink bars, furnishing texts for puritan invective; through another's, quiet, well-bred thoughtful country squires...

The Civil War itself gets hardly a mention. The Commonwealth paradoxically presents a disciplinary problem for young people on the make. Macaulay quotes from Dorothy Osborne::
"The want of a court to govern themselves by is in great part the cause of their ruin. Though that was no perfect school of virtue, yet vice yet wore her mask."

It seems that the 'Interval' was not as successfully straight-laced as we have been led to believe.  Macaulay sums it up like this:

People idled, joked, sang and played, talked in coffee houses, courted, travelled, consulted astrologers and quacks, hunted witches, met for secret worship, laughed at 'the canters' and their comical ways, wrote verse, read romances, kept journals, drank the waters at Tunbridge and Bath, went by Smithfield and 'saw a miserable creature burning that had murdered her husband,' then on, unperturbed, to see curiosities in ivory.

It's hard not to wonder whether, writing when Britain's very Britishness was under threat in World War Two, Macaulay wasn't making a contemporary appeal not to let fear cramp fun and individualism.

She goes on to capture the relief and release of the Restoration with equal zest, once again revelling in the intellectual and social power of women.  In her eyes, that power increased still further in the 18th century Augustan age, with the birth of the Bas Bleus (bluestockings) and their salons.
There's a swift transition from this to the nineteenth century (and what follows is only the second half of a very long, but elegant sentence):

Ladies flocked to lectures, pressed flowers, made purses of beads and mats of Berlin wool, read Keepsake, and floated round ball-rooms with lovely shoulders sloping up from gowns that passed from classical to puff-sleeved rococo and thence to stately Victorian flow; while gentlemen, progressing from bucks and dandies into swells, curled their hair and grew side whiskers.

While making fun of those 'swells', Macaulay nevertheless acknowledges that they were probably little different from their dandy, buck, beau and maccaroni ancestors.

But women, she insists, were, as the Victorian age progressed, subject to more change, heralding the rise in education for the sake of pursuing a professional career, rather than the simple acquisition of 'accomplishments'.

Other aspects of the Victorian era are swept aside dismissively. Writing in the early 1940s, Macaulay could only see Victorian architecture and taste as 'monstrous'.  As for the Edwardian society of her own youth, she celebrates its class-squashing social provisions such as Old Age Pensions and Health Insurance, but derides its pleasure-seeking excesses.  Her wit carries through into an account of the domestic effects of the war that was going on around her in 1942:

Bare legs became a feminine summer fashion; men, more sartorially conservative, clung to such socks as they had.

Within the same paragraph, as the book comes to a close, we get a taste of of the dangerous world in which Macaulay was celebrating her homeland:

English social life is, in these curious, troubled years, moving a few steps nearer that democracy for which we say we are fighting and which have never yet had.  Only a few steps; and whether these will be retraced or continued when the solvent furnace of war dies down, and we are left to grope a way through the wreckage and smouldering ashes, we cannot yet know.

If only Macaulay could have carried on to cover the rest of the twentieth century.  But what a joy it is to read such a quick romp through English history, even if it is packed with assumptions and prejudices from which we now recoil. Wouldn't it be fun if there were a similar book from the perspective of the twenty-first century, and one of today's great writers could make it as easy for a new generation to get a feel for the sweep of our strange little island's story?

What a little gem! It's amazing what you can find in second hand shops. I wonder if she offered or was given the task of cramming all of English history into 48 pages? I meN, when someone rose, for example, was writing about dramatists?

I've glimpsed book covers like these in the past, half-noticing their strange slimness and mood of official authority. Thanks for explaining why the series existed - one immediately thinks "of course!" - as well as for the very delightful dip into Rose Macaulay's book. You have a good friend indeed!

What? A gentle, unrampageous Civil War that ended with a beheaded king, a socially more civilised age that featured witch-hunts and atrocities in Ireland, an age where intellect barely simmered, but managed to produce the Diggers and Levellers who critiqued the whole social set-up...?

I am sorry to be shallow but what drew me to your blog post was the fabulous fair isle yoke in the first photo....