In the wake of the Radio 4 Woman's Hour power list for 2015 let's forget Nicola Sturgeon and Caitlyn Jenner for a moment to consider the female movers and shakers of the Tudor age.

The second half of the sixteenth century was uniquely characterised by a half-century of female rule and it was also a period when noble women were educated to an unprecedented level. So as the primary preoccupation of my Tudor trilogy is the theme of women and power, I have compiled a Tudor Women's Power List power list to rival that of Radio 4’s Woman’s Hour, featuring many of the women I have written about and some I have not.

Still considered one of England’s greatest monarchs, history has perhaps glossed over some of the failures of Elizabeth I’s 44 year reign, choosing instead to focus on the triumphs. The defeat of the Spanish Armada was one such victory, indeed because the Catholic world deemed the Protestant Elizabeth a heretic, her reign was characterised by England’s successful defence against a perpetual and very real Spanish threat.

The period saw a great flourishing of culture supported by the Queen, in particular the rise of English drama with playwrights like Shakespeare and her encouragement of the exploration of the New World by figures such as Frances Drake, all helping to establish the English cultural identity that persists to this day.

Unlike her sister Mary, Elizabeth understood the mechanics of power for a woman on the throne and that her potential for marriage allowed her to play one foreign state off against another. To commit herself in marriage, she realised, would mean a compromise of that power, so she remained single at great personal cost and without the ability to produce an heir to continue the hard-won Tudor line.

Elizabeth features prominently in all three of my Tudor novels.

The Tudors would have remained a family of ordinary nobles were it not for the indomitable Margaret Beaufort. As the mother of Henry Tudor (Henry VII), an upstart king, with a tenuous claim to the throne, who won his crown on the battlefield, she understood the importance of establishing the Tudor dynasty as a force to be reckoned with.

A mother and widow by the age of twelve, Margaret Beaufort managed to place herself, through marriage, into a position from which she could pull the strings to eventually see her son crowned. The English throne had been contested for decades, passing between the houses of York and Lancaster in an endless bloody struggle and it was Margaret who managed to broker a marriage between the Lancastrian Henry and Elizabeth of York, thereby uniting the warring houses.

Once Henry VII was on the throne she ran the royal household with a rod of iron, setting down codes of behaviour and helping negotiate illustrious and powerful marriages for her royal grandchildren to create alliances across Europe: the eldest Arthur to Spanish princess Catherine of Aragon; Margaret to James IV of Scotland; Mary to Louis XII of France and we all know what became of younger brother Henry. 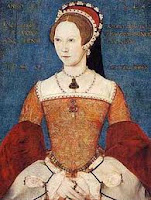 The eldest daughter of Henry VIII with his first wife Catherine of Aragon is remembered as Bloody Mary. This is somewhat unfair as, though it is true 280 people were burned for heresy in her four-year reign, many other monarchs of the period were responsible for equally brutal punishment regimes, indeed her younger sister Elizabeth ordered the execution of no less than 600 in the aftermath of a Catholic uprising in the north of England alone.

Mary’s route to the throne was not straightforward and she was compelled to raise an army to overthrow her young cousin Lady Jane Grey, who had been named as her brother Edward VI’s successor. Staunchly papist, Mary dragged England back to Catholicism kicking and screaming, re-establishing papal power and marrying her cousin Philip of Spain. Unfortunately this marriage was the source of much anxiety as the English worried about becoming an annex of Spain. An uprising ensued but Mary stood her ground and quelled the rebels gaining the respect of her people.

But Mary’s Spanish marriage caused England to join in Spain’s European war, which ultimately led to the loss of Calais (the last English territory on the continent) and her lack of an heir meant that when she died she had no choice but to pass the crown to her popular Protestant sister, thwarting her hopes of a Catholic England.

Mary Tudor and her reign are explored in Sisters of Treason.

Catherine of Aragon is remembered primarily for the humiliation of her divorce from Henry VIII in favour of Anne Boleyn and miserable end in a damp castle separated from those she loved. But that is a mere fragment of her story. As Henry’s queen for more than twenty years, and with her illustrious family ruling over most of Europe, she was the most powerful woman in England, prompting Thomas Cromwell to say of her ‘if not for her sex, she could have defied all the heroes of history,’ and this from an enemy.

She promoted education for women and relief for the poor and during Henry’s French campaign she was made Regent of England, raising an army to fight the invading Scots, who thought with the King away they would find an easy victory in England. This was not to be, James IV was killed at Flodden Field and the pregnant Catherine, who had ridden north in armour to encourage her troops, sent a piece of the Scottish King’s bloody coat to her husband in France to mark her triumph. 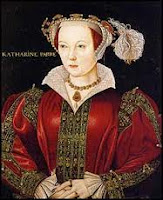 Katherine Parr is not an obvious choice for the Tudor power list as she is remembered as the wife who managed to survive marriage to Henry VIII by being meek, uncontroversial and managing to outlive him.

This was far from the case: Katherine used her position as queen to forward her reformist political agenda in a volatile, polarised court. Her Catholic enemies tried to bring her down but failed miserably as she managed to stay a step ahead of them causing them to topple in her stead. At a time when women were supposed to be seen and not heard, she was one of the first women to publish in the English language, penning two widely read books, one a highly dangerous political text that might have seen her follow her predecessors to the block.

Like Catherine of Aragon, Katherine Parr was the only other of Henry’s queens to hold the position of Regent of England, while Henry was campaigning in France, a role she performed with aplomb, managing the politically divided council and ensuring the safety of the realm. It was Katherine who encouraged Henry to reinstate his outcast daughters to the succession, thus playing an important role in the eventual half-century of female rule in England, and played a pivotal role in the education of the young Elizabeth Tudor.

Katherine Parr is the focus of Queen’s Gambit. 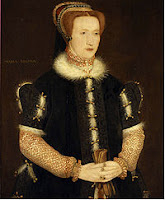 Bess of Hardwick is the only woman on the Tudor power list without a direct connection by blood or marriage to the monarchy, but as an ordinary woman born into a family of minor gentry who eventually became the Countess of Shrewsbury, amassed great wealth and land and oversaw the building of some of the great Elizabethan houses such as Chatsworth and Hardwick Hall, she deserves a mention.

Some might dismiss Bess as a canny gold-digger but this is far from the case. In the period as a woman if you didn’t manage to elevate your family through marriage you were deemed a failure, so Bess’s marital mountaineering was more about clever negotiation than seductive pulchritude. Her final marriage contract with George Talbot the Earl of Shrewsbury, one of the primary nobles in the land, was cleverly constructed to include the marriage of her son and daughter, from an earlier union, to Shrewsbury’s son and daughter, meaning that her children and their progeny would also become part of the illustrious Talbot line.

Shrewsbury managed his money badly and lost a fortune as Elizabeth’s jailor to Mary Queen of Scots, who he was impelled to house, with her vast queen’s entourage, for nearly twenty years. Bess in the meantime shored her fortune up, cultivating powerful friends, building houses and accumulating land in Derbyshire. But her ambitions were greater and she managed to marry one of her daughters to Charles Stuart, the grandson of Margaret Tudor, meaning that the daughter of that union, Arbella Stuart, was a strong contender for the English throne after Elizabeth. Bess’s hopes of becoming the queen’s grandmother were, however, dashed when Elizabeth handed the crown to Arbella’s cousin James VI of Scotland.

Arbella is to be the protagonist of my next novel. 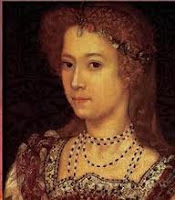 An less obvious candidate for the power list as she's a little known figure, but as a prominent and well-connected woman who forwarded the ambitions of her family at court, was involved in risky secret espionage with the Scottish Court on the matter of the Stuart succession and lived openly in an adulterous relationship, having several children with her lover, a very bold move for a woman of the period, she deserves her place.

Forced into a deeply unhappy marriage aged eighteen, Penelope became the muse of Sir Philip Sidney, inspiring his sonnet cycle Astrophil and Stella and was highly influential in the Elizabethan cultural world of poets and playwrights. Her refusal to be shamed in her adultery, in which she behaved in a way that was the norm for men of the period but completely taboo for women, marks her out in my mind as a proto-feminist. Also she was listed as one of the perpetrators of her brother The Earl of Essex's rebellion and not only was she the sole woman listed but was the only person not to be tried for her part in it. This points to her having great power and influence behind the scenes.

Penelope Devereux is the heroine of Watch the Lady

Find out more about Elizabeth Fremantle's Tudor trilogy on www.elizabethfremantle.com

Love this Tudor female power list, thank you. I will always admire Katherine Parr for her writing, and look forward to your book on Arabella and hope her mother will feature!

Excellent blog!And good to remember that Mary was mainly called bloody because on the losing side (though I do think it would have been a Bad Thing for the long history of democracy if she and Philip of Spain HAD produced an heir).

I just finished reading Mary S Lovell's biography of Bess of Hardwick, and I was hoping she'd be on this list!