Notes on Notebooks by Imogen Robertson 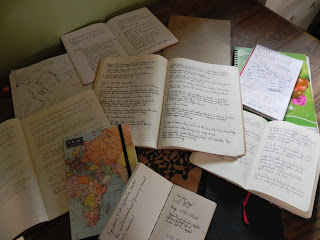 To be clear, I don’t think I’d have a career as a writer at all if it weren’t for the invention of the word processor. I can’t spell, and I’m never going to be a ‘one perfect line at a time’ author. My novels grow by a process of accretion, and each one is a palimpsest.

But try and take my notebooks away from me and… well let’s just say I spend a lot of my working life working out how to kill people.

I have seen pictures of writers’ studies where a particular sort of notebook is collected in neat ranks - the testament to a lifetime of devotion to a particular brand, size and paperstock which verges on the fetishistic. I’m too much of a magpie for that and there are too many different appealing textures of cover and paper for me to be so monogamous. That said though, I realise I’ve developed patterns and preferences and have in my own way become just as rigid as anyone else. I have categories. 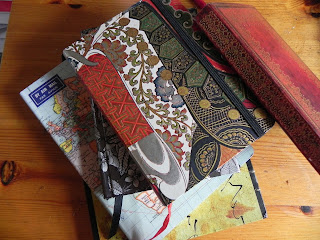 First is the handbag notebook - the one that I carry everywhere. Sometimes there are a few of these on the go at once - they live in different bags - or as this category is the most varied, they get replaced with the next shiny gift. Paperblanks are the favourites - the midi format ones with jewelled covers that fold over themselves with a satisfying magnetic clunk. Into these go all the random thoughts, books recommendations, scraps of poetry or quotes from whatever I’m reading on the train, odd paragraphs of journal or conversations overheard on the bus, advertising slogans, classified ads, exchanges with my husband, dreams. Sometimes I write down words I’ve recently discovered and think might come in handy such as ‘accretion’ and ‘palimpsest’.

Often I never reread them, the good stuff I remember and the rest sort of sinks back into the subconscious somewhere for mining later. The act of writing these things down though does give them more of a chance to hang on, somewhere in the brain where they might be useful one day. My shiny notebooks will, of course, be used in evidence when my husband finally gives up and tries to get me committed. 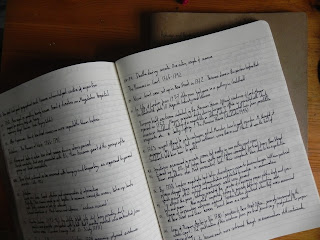 For research I need something bigger, something that looks a bit more serious. It’s probably a way to deal with that impostor syndrome one often develops as a writer of historical fiction. The Proper Historian appears, sneering, and says ‘how dare you write about history? You know nothing! Where is your PhD?’ I fend them off with my Moleskine©  Ruled Cahier Journals - Kraft Brown - Large, saying ‘Ha! No! But I have a really good notebook and I’ve written in very neatly,’ adding, sotto voce, ‘often with a fountain pen.’

Then there are the ‘working things out in prose’ notebooks. I discovered a stack of perfect ones for this in a shop under my mother-in-law’s house in Porto. Ned tried to take one once - probably to write notes about cheese in - and we almost got divorced. They are cheap exercise books and full of attempts to get plots in order - so I end up with pages of fairly neat progressions then WHY? written huge and coloured in - or BLACKMAIL? (underline star star star). Ah, yes. In this picture it’s BLOOD. These might form exhibit two in my committal hearing. 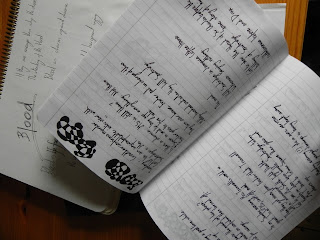 And finally - and just visible in the first picture - there are the huge sheets of drawing paper which are the starting point for a book. They often get covered in doodles too, but mostly are spider diagrams, with one side of the page getting crowded with names and short hand for scenes, while other limbs dangle out lonely into space, waiting for the next thought to anchor them.

Enjoyed this glimpse into your notebooks, with explanations. (Sssh! Never knew the Imposter Feeling was a syndrome and not my own peculiar fear until now.) Thanks.

I really enjoyed this - thanks. Especially enjoyed - like Penny - the technique for fending off Proper Historians with a notebook. As I almost never have a notebook about me, I might have to use something else. My longbow, perhaps. 'Let's re-enact Agincourt. You be the French.'

Here's a confession - I don't get the notebook thing. This is not a criticism. For those of you who love notebooks, I wish an abundance of them, with beautiful covers and paper - but I just don't understand it.

I've always relied on memory - if something's worth remembering, I'll remember it. After all, as you say, you hardly ever re-read the notebooks...

Occasionally, I'll take a pad on holiday, or to the pub - but it's the cheapest, most basic pad I can find, and I don't care if people rip scrap paper from it. I really don't care about it. The pen - Ah, now, the pen is much more important. It has to be light, free-flowing, scribbly, so I can write fast, without effort.

I do a lot of the 'working out in prose', but I do it on the lap or desktop, so I can drag paragraphs about, put them in coloured boxes, or different coloured text. - But so many are the lovers of notebooks that I'm obviously missing out on something.

I am with you - I am a notebook girl but I am much more conservative, using only Moleskines. They were much harder to find when I first began using and collecting them. I love the back flap where you can slip in a map or appointment cards when travelling. I am horrified, Susan Price, at the idea of trusting it all to memory. Mine is certainly not up to it.
Early travels taught me to take notes throughout the day, scribbles, observations etc and then WRITE THEM UP BEFORE DINNER. Otherwise, it all became a muddle. Written up, they were transferred to my laptop… and so the books began to take shape.
When I am at my desk, I scribble on a million scraps of paper. It is a jigsaw puzzle of thoughts and cul-de-sacs
I love hearing how other writers collate their material, thank you for this, Imogen.

Ooh, loved this! Thanks for sharing, Imogen. I have the same gradations of notebooks (from handbag, to 'proper' with 'workings out' in between and big sketch pads for ideas) but yours look a lot less random and rather neater inside. I LIKE the Paperblanks - might get a few of those...
It's what you put in them that matters but, like you, I'd be bereft without my notebooks and have been known to spend a fretful day hunting a particular one down.

I love this, loved seeing someone else's notebooks and am much the same *but* the handwriting I use in my notebooks is so much messier. I can write perfectly neatly, but sometimes even I can't read what I've written in my notebooks. Partly this is about states of mind and body (I have a chronic illness and occasionally write in the pitch dark or with my eyes closed - the ability to do so legibly has not improved with practice). But then part of me thinks, oh well, this way no-one else can read it!

I got a laugh from this - I'm a notebook lover, and immediately recognised the 'fairly neat progressions then WHY?' part. I couldn't work without my notebooks. I need something to scribble in, and make little sketches, or write lists of interesting names, or write horrible first drafts of things that are then typed up and turned into something completely different. I also quite like having the ability to review the process of actually writing - whenever I think 'argh, I can't do this!' I can look back at previously worked up snippets and see exactly what I've changed. Notebook lovers are in good company too: I've been reading The Book of Lost Tales, and in it, Christopher Tolkien describes his father's notebooks as written in pencil, with a fresh draft written over in pen, and the original scrap-page notes tucked in the front...sound familiar, anyone?

I love the idea of different note books for different types of notes. I'm never that organised. For me, it's series of cheap spiral bound notebooks in which I jot down every historical note, stray plot thought, pages of dialogue or random ideas. When I get back to my desk, I can then tear out any relevant pages and stick them into a arch-lever file between the typed pages of plots, character profiles and research notes. My notebooks become more and more dog-eared as they are dragged in and out of handbags and pockets, until they fall to pieces. I've tried buying beautifully bound notebooks, thinking they will survive better, but if the notebook is too pretty or the paper too nice, I can't bring myself to spoil it by writing in it.

But my biggest problem is that my best moments of inspiration always seem to strike when I'm in the bath or doing the washing-up. What is it about water that produces those wonderful flashes of insight? But it also means my hands are dripping wet when I reach for that notebook, so maybe I need to switch to ones you can write on underwater.

I love all the different methods - or not methods - Karen's arch lever files sound great to me and I know what you mean about needing water proof pages from time to time. Wish I had memory good enough not to need notebooks, but I like them so much as objects I probably would use them anyway. I like Carol's discipline, but then I enjoy the muddle and those old shreds of ideas like Becca says... Anyway, thank you all - very interesting to hear how everyone else does it - I've written in the dark too in my time and not had a clue what I meant when I see it again - but I think just the act of writing can settle ideas and make them grow even when the writing is illegible!

But it's not about good memory. The fallibility of memory acts as a filter - you remember what made a strong impression, or what struck you as a really good idea. You forget it - but opening your book file instantly jerks the idea out of forgetfulness...
But reading the comments makes me think, again, that I'm obviously missing a trick. I just can't see me dealing with all those different notebooks...

Writers and the eternal search for the perfect notebook! Someone once told me never buy a notebook that's so beautiful you're scared to write in it :)

Another Moleskine fan here - and the cheaper WHSmith A5 versions, too. Muji are also really good for cheap light notebooks, though at the other end I'm just trying out a Smythson travel notebook for the first time (but not sure about the blue paper ...). Simple A4 plain or lined refill pads are the 'at home' notes of choice.

WOW!! This notes help me a lot to get A+ in SEE . Thanks for sharing good notes about History of earth