I know it's been over for some time and we've probably all watched Jonathan Strange and Mister Norrell since then. But I wanted to consider what a TV series does differently from a play, from a book. It doesn't have to be historical fiction but perhaps it illustrates the point best when it comes to visualising the scene.

I've read both Hilary Mantel's books about Thomas Cromwell twice, seen both the plays twice and seen the TV series twice (the last two episodes three times). I can't get enough of Hilary Mantel's creation but it does make me ponder on what the different media do for it. 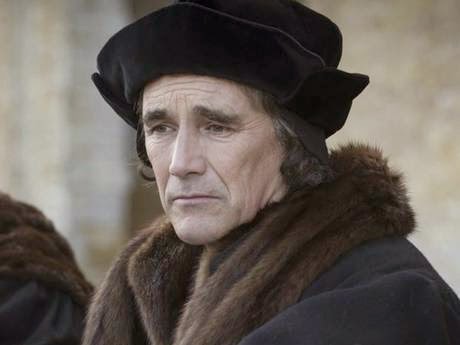 First on TV the setting, costumes and props - these were all utterly convincing: the interior lighting by candles or fires, mullioned windows, all goods in chests, an illuminated prayer book dazzling in its colours because new. There was great attention to detail. (But see Liz Fremantle's February post for more on that and some reservations).

It's obvious that TV can do some things the stage plays couldn't do, giving us flashbacks to the boy Thomas Cromwell's brutal beating  by his thug of a blacksmith father - the motive to run away to the continent, with which the first book opens.

The TV series opened with the splendidly cast Bernard Hill as the Duke of Norfolk telling Cardinal Wolsey he is done for. The trouble with this excellent start was that we then had to go back to a period when Wolsey was still in the ascendant and could order Harry Percy and Thomas Boleyn around and tell them that Anne Boleyn had to go and marry someone in Ireland.

There was a bit too much of this "non-linear" narrative going on: the captions would have been more useful if they'd had actual dates rather than 'Four years before Wolsey's fall" and suchlike. No such problems with the books or the stage plays.

Wolsey himself was superb. Jonathan Pryce was not an obvious piece of casting: one thinks of him as tall and cadaverous rather than fat and jowly like a cleric who indulged too much in earthly pleasures. But he was very good indeed.

Then so was Paul Jesson on stage. But this is not an argument about who gives the better representation, pitting Mark Rylance against Ben Miles or Damien Lewis against Nathaniel Parker (the last another example of successful casting against type).

What interests me is what the different media can do with the same story. To take just one example - the masque pillorying Wolsey after his death. Hilary Mantel has taken "Cardinal Wolsey Going down to Hell," performed at the house of Thomas Boleyn (Anne's father) and transposed it to Hampton Court. The farce, presumably commissioned by Boleyn, was put on as an entertainment in January 1531, for the new French Ambassador, Claude de la Guiche. "The Duke," whom Mantel reasonably takes to be Thomas Howard, Duke of Norfolk, called for it to be printed. 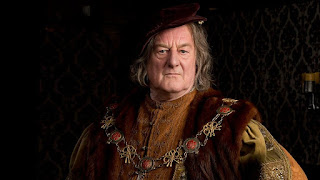 The Ambassador was evidently not amused and according to Eustache Chapuys, the Imperial Ambassador, "much blamed the earl, and still more the Duke for ordering this fare to be printed." (quoted in Greg Walker's Plays of Persuasion: Drama and Politics at the Court of Henry Vlll (Cambridge University Press 1991)). Not surprisingly, since it portrayed a Cardinal tormented by devils and burning in hell.

Hilary Mantel takes this reasonably well known fact and makes of it something crucial to the plot of both her novels and one that offers an explanation for Cromwell's implacable persecution of the five men executed with Anne Boleyn. Each of the four "devils" is a nobleman (somewhat unlikely as actors in a farce, perhaps, but no matter). Cromwell watches them unmask and reveal themselves to be George Boleyn (Anne's brother), Henry Norris, Francis Weston and William Brereton.

In the novel of Wolf Hall this scene comes less than halfway through and the person taking the part of Wolsey himself is Master Patch, the jester whom the Cardinal gave to the king. In the play it's Mark Smeaton, neatly linking all five executed men to the farce.  Here in the novel  Mantel describes the reactions of the audience to the farce:

"Anne sits laughing, pointing, applauding. He has never seen her like this before: lit up, glowing. Henry sits frozen by her side. Sometimes he laughs, but he thinks if you could get close you would see that his eyes are afraid."

Crucially there is one dissenting voice at the "entertainment" - "Someone calls out 'Shame on you, Thomas Howard, you'd have sold your own soul to see Wolsey down.' Heads turn, and his head turns, and nobody knows who had spoken; but he thinks it might be, could it be, Thomas Wyatt?"

In Mike Poulton's playscript it is definitively Wyatt, who cries, "Shame! Shame on you, Norfolk! Shame!" But Wyatt is a major linking character in the plays and gets a more prominent role than in the books.

In the TV version, no-one cries "Shame!" at all. And that's a shame. It seems no-one at court is brave enough to stand up for the Cardinal, to whom Cromwell's intense loyalty is a constant motif, explanation and motive. In fact it turns into a bit of a Revenge drama, with Cromwell avenging his father-figure Wolsey, who was more benevolent to him than his own flesh and blood parent.

There is a scene where Cromwell watches the four "devils" take off their masks but it is somewhat wasted because of the casting. George Boleyn looks too like Brereton - or is it Weston? The point gets lost and has to be brought out in a later episode where Cromwell is interrogating the accused men in the Tower. If you hadn't read the books, I don't know if you would have "got" it. The whole scene is very brief on TV and there is no sign of Mark Smeaton. 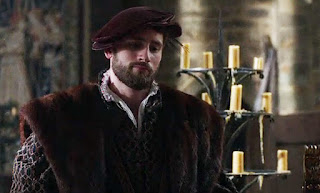 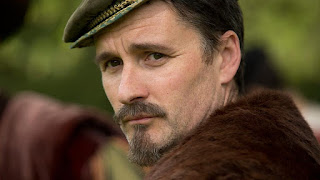 But now we have three ways of "knowing" that at least four of the five men executed before Anne Boleyn took part in the Wolsey farce, does it matter that Hilary Mantel made this up? Surely, only if we come to believe this really is what happened?

Which brings us to the question of how we know our history; is it thorough reading historians or historical fiction. Do we believe that Elizabeth Woodville saved her son from Richard the Third, as Philippa Gregory tells us she did?

As Hilary Mantel says in the Author's Note to Bring up the Bodies, " I am not claiming authority for my version; I am making the reader a proposal, an offer."

As you may have gathered, although I enjoyed it, I liked the TV version less than the other two manifestations of Hilary Mantel's Cromwell stories. It may not be surprising that for me the books come first. There were a couple of show-offy moments on Tv which I positively disliked: Thomas stroking Anne Boleyn's breasts in a scene it took a moment or two to realise was in his imagination and the ridiculous dragging of her body along his dining-table with him about to stick the knife in. It was evidently too much of a temptation to make a metaphor literal.

And it lost a lot of the humour of the books and the plays; in the theatre everyone laughed when Leah Brotherhead said, "Oh, I'm nobody. I'm only Jane Seymour." There were many such touches, replaced on TV by Cromwell's sardonic remarks and occasional swearing.

Still, there was much to enjoy in the minor performances, such as Charity Wakefield's spirited and saucy Mary Boleyn - though it was hard to believe this one would have let Henry walk over her so. And one of my favourite characters, Eustache Chapuys was perfectly rendered by Matthieu Almaric. There was even an effort at his "startling hat" with which Hilary Mantel had such fun in Bring up the Bodies. Sadly, I could not find a picture of him wearing it. 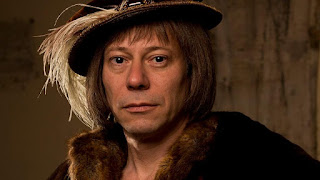 I can't wait for the third book, The Mirror and the Light; the third play, with, please, Ben Miles and Nathaniel Parker, the third TV series, with Mark Rylance and Damien Lewis. I like Hilary Mantel's "offer" very much, in whatever form it comes. But best of all in the books.

What do you all think?

I'm currently reading Wolf Hall, haven't seen any of the dramatisations. They sound interesting, though.

I didn't get to see the plays - really enjoyed the TV series, which I saw very soon after reading the books, which I think helped as it was all fresh in my mind.
I am really looking forward to the final book and really hope that the BBC get Mark Rylance back for it !

I so regret not seeing the stage plays.

Hilary Mantel points out that only George Boleyn was a nobleman; the others were "gentlemen." Gentlemen students acted at university and the Inns of Court so it's not inherently improbable that they would have taken part in the masque.