It’s astonishing what you discover when you are doing the research for a novel. In my first 17th century Fenland novel, Flood, Tom Bennington, brother of the narrator, Mercy Bennington, is injured twice in the same leg, develops gangrene and suffers an amputation. In the second novel, Betrayal, I alternate between the two as first-person narrators. Tom goes to to resume his legal studies at Gray’s , while searching for the missing royal charter which granted possession of the common lands to the fenlanders. While in , Tom also hopes to have a wooden “peg leg” fitted, to improve his balance and mobility.

What did I know about artificial legs in the mid-seventeenth century?

Precisely nothing – which led me to Ambroise Paré.

Nowadays we are all familiar with the amazingly sophisticated artificial limbs which provide the chance of a near normal life to accident victims and soldiers, but people have lost limbs through accidents and war injuries from earliest times. They were not left helpless. Greeks, Romans and Egyptians all made attempts to provide replacements for such tragic losses, but inevitably these were very simple and crude. Things did not improve much over the centuries. Remember those illustrations of Long John Silver and his wooden leg? Such basic legs were still common for much of the twentieth century, as attested by photographs.

Yet back in the sixteenth century – yes, that’s not a mistake, the sixteenth century – there was a new approach to this painful problem. Enter Ambroise Paré.
Ambroise Paré was born in Bourg-Hersent, near , in 1510 and followed in the footsteps of his elder brother, who was a barber-surgeon. This was a catch-all profession, covering everything from cutting hair and pulling teeth to stitching up wounds and carrying out amputations. His basic professional training took place at the most prestigious hospital in , the Hôtel-Dieu, where he was taught the standard practices of sixteenth-century surgery. These included some which seem horrific to us now – wounds would be treated with boiling oil, and after an amputation the severed limb was cauterised with a red hot iron.
Paré was both a compassionate man and brilliant innovator. Like most surgeons, his first major experience as a young man was on the battlefield, in the Piedmont campaign of Francis I in 1537-8. Two episodes during these battlefield experiences had a profound effect on him. On one occasion he was horrified when he saw severely wounded men put out of their misery by having their throats cut by their comrades – it determined him to devote himself to improving the care of those with gunshot and sword wounds and never to abandon his attempts to save life.

On another occasion, there were so many men with wounds that he ran out of supplies of the hot oil used to scald them. Having read of a method used by the Romans, he mixed up a salve of oil of roses, egg white and turpentine. He dreaded that the men whose wounds were only salved would die. Instead, the following morning those treated with hot oil were in severe pain, their wounds inflamed, and some had died, while those treated with the makeshift salve were making a good recovery. Subsequently, Paré used the same treatment for amputations and never cauterised again, finding that those treated by the old and violent method frequently died of shock or infection, while his new method spared his patients a great deal of unnecessary pain and resulted in a far better rate of recovery.

A further problem with amputations was the risk of the patient haemorrhaging to death, if cauterisation failed to seal the arteries. Paré introduced ligature of the arteries to prevent this happening. It seems extraordinary that his life-saving techniques did not at once become widespread, for he did not keep his methods secret, as some surgeons at the time were apt to do (for example in the case of obstetrics). Instead Paré published extensively, explaining his methods in detail; his first work, based on his treatment of war wounds was The method of curing wounds caused by arquebus and firearms (1545). His use of ligature was discussed in his Ten Books on Surgery (1564).

What was to become of these young soldiers who lost an arm or a leg in battle? Cast out of the army, crippled for life, they faced a bleak future. Some resorted to suicide. Paré believed that it should be possible to make life more bearable for them. Curious and inventive as ever, he developed the art of prosthetics beyond anything before envisaged. He designed artificial legs with jointed knees and ankles, arms with jointed elbows and wrists, hands with complex fingers.
It was around this time that elaborate automata had become popular as toys for the wealthy, and the mechanisms of clocks also grew more complex. Many of the same principles were applied by Paré to his artificial limbs.
Instead of simple wooden props, his metal legs were intended to reproduce as nearly as possible the movement of the human leg, but they were very heavy. Some of his experimental limbs were made in collaboration with a lockmaker he refers to as “Le Petit Lorrain”. Was he a short man called Lorrain? A man from Lorrain? Such a man would have similar skills to a clockmaker, for this was also a time of complex locks. Lorrain designed a type of artificial leg using leather to reduce the weight. The extraordinary breakthrough in prosthetics pioneered by Paré was recorded in detail in his book Ten Books on Surgery (1564), which was lavishly illustrated.
As well as providing limbs for amputees, Paré also developed false eyes for those who had suffered eye injuries, another common battlefield wound from flying fragments of shrapnel, in this new age of hand-held firearms.

Paré’s work was not only concerned with war wounds and their aftermath. He also served as surgeon to four successive kings of : Henry II, Francis II, Charles IX and Henry III. Indeed, he was so valued by Charles IX that the king saved his life during the St Bartholomew’s Day Massacre (1572); as a Huguenot Paré was in considerable danger. He continued as the royal surgeon until his death in in 1590.

In peacetime medicine, one of his principal interests was obstetrics. At a time when most babies were delivered by midwives, surgeons would normally only become involved when something was seriously wrong, endangering mother or baby or both. At the time there were usually only two options: a Caesarean, which generally killed the mother, or the dismemberment of the unborn baby, killing the child. Paré believed that such deaths were often unnecessary, like the deaths of his soldier patients. He developed methods of manipulating the baby in utero in order to achieve a safe delivery. He wrote a treatise on midwifery and trained other surgeons in his methods, which must have saved hundreds of lives.
As an expert anatomist, he also had an interest in forensic medicine and the presentation of legal evidence. Another of his books was Reports in Court covering the subject of what we would now call expert medical witness evidence.

Above all, Paré was activated by two principles: he devoted his life to developing surgical, medical and mechanical techniques for saving and improving lives, and he believed above all in sparing his patients unnecessary pain. It earned him the title of “the gentle surgeon”.

So why is he virtually unknown today? And why – going back to my initial discovery of his mechanical legs – did it take so long for his ideas to become commonplace? In the matter of cauterising wounds, it seems to have been a sheer pig-headed refusal to abandon long-established practices. As for the prosthetic limbs, perhaps they were just too complicated and expensive to come into general use.

Whatever the reasons, I feel Ambroise Paré should be celebrated as the man who first saw that surgery need not be a form of unavoidable but agonising butchery; instead his gentle practices could save and transform lives, although, as a devout man, he always attributed his successes not to himself, but to God. He laid the foundations of modern surgery, something we should all be grateful for.

So, in Betrayal, when my protagonist Tom Bennington arrives in , he seeks the help of a barber surgeon who is an admirer of Ambroise Paré, determined to carry on with his work. 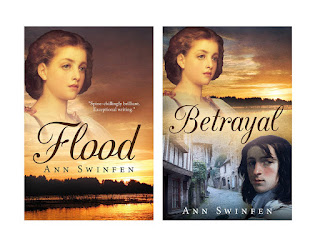 Thank you for this - you're so right. Pare was far worthier of admiration than most 'heroes', and yet is little known.

My father had a battered paperback book, published in the '30s, called 'Devils, Drugs and Doctors.' It was a history of medicine, and one of the people celebrated in it, for whom the author had great enthusiasm, was Pare. I'm glad to be reminded of him. He was a remarkable man.

How interesting, Susan! I wonder whether that book is still around. Must have a search. Pare seems to have been a quite remarkable man, so clever, so ingenious, and so kind. I've created a surgeon in my novel Betrayal who is obsessed with carrying on his work - eccentric, but also kindly.

Just found a secondhand copy and ordered it! Thanks for the info, Susan.