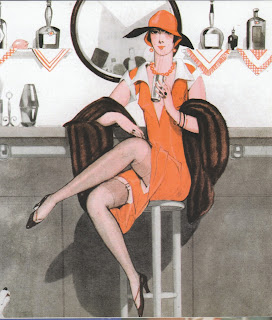 It’s summer, it’s hot, and I’m up to my eyes in researching the next book… Happily, it doesn’t always have to be the heavy stuff. Today I’m looking into cocktails - specifically, those popular between the ‘Jazz Age’ of 1925 or thereabouts, and the early 1930s. In this endeavour, I’ve been assisted by a book, which, although published in 1949, still has about it the raffish feel of that earlier time. It’s my father’s well-used copy of the Esquire Handbook for Hosts, and it contains everything one could possibly want to know about… well, being a host. To this end, it offers chapters on cooking - provocatively titled ‘the world’s best chefs wear pants’ - on keeping one’s guests amused during the hours between cocktails and dinner (card games of all sorts, from Gin Rummy to Poker, feature here) and on ‘what the well-dressed host will wear’ (‘your double chested dinner jacket of the same midnight blue as the dress trousers is always in good taste’). But the main point of the book is - not to put too fine a point on it - the drink. 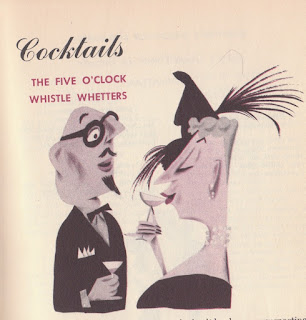 Here are chapters on knowing your wines, on mixing a punch ‘to bowl you over’, on fixing a ‘highball’, and on making the perfect Mint Julep. There is even a section for teetotallers, as well as one for the inevitable morning-after hangover cure. But the sections which interested me are the ones that deal with the cocktail, in all its variety. So here’s the Manhattan - this particular version an eye-watering concoction of ‘4 parts Rye or Bourbon to 1 part Italian Vermouth’, stirred, not shaken and poured into a glass with a cherry or ‘preferably, a twist of lemon peel’. Here’s the Old Fashioned, which seems to consist mainly of Angostura Bitters, sugar, and orange zest; the Daiquiri (fresh lime juice, Bacardi rum, ice and sugar); the Gimlet (3 parts dry gin to 1 part Rose’s lime juice) and of course the Martini. This classic drink, as most aficionados will know, has many variations, but the classic, as given in the Handbook, is 1 part French Vermouth to 2 parts gin, served in a cocktail glass with a green olive or a twist of lemon. The Gibson, otherwise called a ‘Very Dry Martini’, is a lethal sounding combination of ‘1 part Vermouth to 5 parts gin’, served with a cocktail onion… 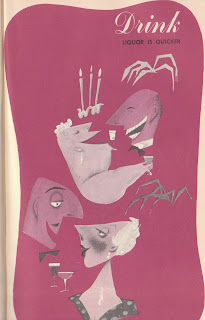 The list of evocative sounding names goes on: the Pink Lady (gin, egg white, lime juice and grenadine), the Whisky Sour (lemon juice, sugar and bourbon), the Manhattan (orange bitters, vermouth and rye or bourbon), and something called ‘Death in the Afternoon’ - a mixture of champagne and absinthe - which was apparently a favourite of Ernest Hemingway’s… Needless to say, I haven’t tried all these drinks - or at least, not all at once - but reading my father’s cherished ‘how to’ book on being a good host had given me an insight into a long-lost world. It was a world of elegance, and sophistication - of Jay Gatsby’s ‘blue gardens’ with their ‘whisperings and… champagne’ and ‘yellow cocktail music’ - but it was also a world of excess, and desperate gaiety, and borderline alcoholism. One only has to think of Lady Brett, in Hemingway’s The Sun Also Rises, with her cropped hair and her sporty clothes, and her fondness for getting ‘tight’. Or Fitzgerald’s alcoholic screenwriter, Pat Hobby. Or Waugh’s brittle and affected Bright Young Things, in Vile Bodies… Alcohol and literature have always had a close association, and never more so than in the hey-day of the cocktail - which, roughly speaking, lasted from 1920 to the early 1960s.
The earliest use of the term ‘cocktail’ dates from much earlier - the beginning of the nineteenth century - and drinks such as the Sazarac, a mixture of brandy, bitters and absinthe, were popular from the 1850s onwards. But it wasn’t until much later - after the First World War, in fact - that the idea of mixing one’s drink of choice with sweet or ‘dry’ mixers, really took off. The first cocktail party was apparently held in St Louis, in May 1917 - perhaps as a ‘send-off’ to some of those brave ‘Doughboys’ going off to fight in France - but the full impact of what newspapers of the time came to describe as the ‘cocktail habit’ wasn’t felt until after the war, and the imposition of Prohibition in 1920, across the United States. During this period, which lasted until 1933, drinkers had to take their pleasures illicitly, in the notorious ‘speakeasies’, where illegally produced ‘bathtub gin’ and other horrors, would be mixed with sweet-tasting liqueurs, and chilled with lots of ice, to mask the taste. In Europe, where no such restrictions existed, the craze nonetheless caught on, and soon the ‘cocktail hour’ became an established fixture of any smart social circle, celebrated by writers of the period from P.G. Wodehouse to T.S. Eliot. In Carry on Jeeves, we first meet Bertie Wooster when he is recovering from a night of excess, drinking concoctions of the sort enthusiastically described in another Wodehouse novel, Uncle Fred in Springtime: ‘champagne… liqueur brandy, armagnac, kummel, yellow liqueur, and old stout, to taste…’

Then he seemed to flicker, and wasn’t there any longer, I heard him moving about in the kitchen, and presently he came back with a glass on a tray.
‘If you would drink this, sir,’ he said, with a kind of bedside manner, rather like a royal doctor shooting the bracer into the sick prince. ‘It is a little preparation of my own invention. It is the Worcester Sauce that gives it its colour. The raw egg makes it nutritious. The red pepper gives it its bite. Gentlemen have told me they have found it extremely invigorating after a late evening.’
I would have clutched at anything that looked like a lifeline that morning. I swallowed the stuff. For a moment I felt as if someone had touched off a bomb inside the old bean and was strolling down my throat with a lighted torch, and then everything seemed suddenly to get all right. The sun shone in through the window; birds twittered in the tree-tops; and generally speaking, hope dawned once more.
‘You’re engaged!’ I said, as soon as I could say anything.

Fascinating! I love the whole idea of the cocktail and the connections with the 1920s. I read another explanation somewhere which said that bartenders would mix up bits ipof alcohol left over in bottles that were nearly finished.