I’m in that” trudging through a tangled story state” right now, so my mind isn’t up to too much precise history. Here’s today’s alternative:

At school, at a certain point, I was (ahem) moved from the form that did History to the class that enjoyed Economic History, and very glad I was too. Later, as far as I can recall, one chose History or Geography, People or Places. You were either studiously academic or supposed to like the open air and walking.  I am very glad how well these subjects now work together.

I am not a great traveller, unless you count books and stories, but when I flew to Canada recently, history and geography seemed inseparable. 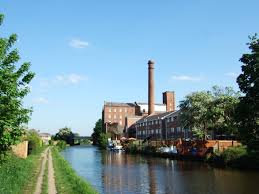 The rail track from Leeds to Manchester went through steep valleys, the trees lush green from the same damp that assisted cloth production, and with names like Halifax and Huddersfield. The railway pushed on through the remains of the industrial revolution: stone bridges, arched viaducts and sudden tunnels; canals, four storey mills and cloth factories. It was a fine journey, if time was not an issue, although one that any “Northern Powerhouse” rail route could destroy. Then, after a purgatory of junk food, booze and shopping, came take-off and flight.

Unusually, the day was clear and sunny, so peering down was like gazing at a familiar map of Great Britain. The landscape was a patchwork of green fields, hedges and trees, pleasing now, less pleasing during the Enclosures. The small roads twisted here and there between them, naturally fit around the contours, and curves. Over this gentleness lay the rigid lines of motorways, straight and autocratic as Roman roads.

On the plane went, out over the shipping lanes that carried people and cargo into and out of Liverpool and the other ports along the coast. Now, the calm sea just held the tiny pins of the wind-farm, and the pale silt-laden water still spreading out into Morecombe Bay. The shipyards and trade along this coast have gone.

Next, the plane passed over the great hook of Barrow-in-Furness in Cumbria. In the middle ages, the Cistercian abbey at Furness was a centre for mining minerals; by the twentieth, the small natural inlets offered protection for the building of warships and submarines. 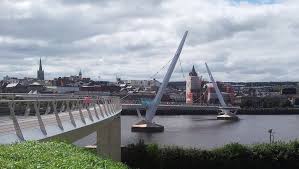 The plane passed across the Isle of Man with its circling road and then above Ireland. At one point, there was Derry, clearly divided by the Boyne, just like the aerial view I’d seen on a recent history programme.

Then all was gone. We were over the Atlantic.

Five hours later, land re-appeared: a vast area of trees, lakes - seemingly small - and more trees and more lakes, a seemingly empty terrain as divided and broken as a jig-saw puzzle. Now I’ve checked, I think this was Newfoundland and Quebec. Then, as I looked down, all I could wonder was why and how would people travel over such a difficult, inhospitable landscape, and when, as there seemed to be no roads winding between the patches of water and rock. Suddenly, from the yellowed text book came a long lost term: “Canadian Shield”.  Surely this landscape, scraped by glaciation, was what that term had meant? The land itself was history and home for the First Nations.

Before long, down below the wings, we saw the long channel of the St Lawrence River. We were flying inland past Quebec city, south west, down towards Toronto, Lake Ontario and the flat lands beyond. 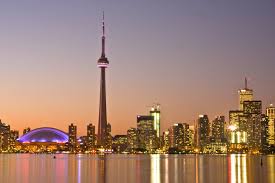 The curving British roads had gone. Now I stared at a grid of square plots and straight roads and flat roof buildings. These were the blind-eyed signs of colonial settlement where the simplest way was to draw boxes on a map and sell the land off in tidy lots. When the geography of a place is so vast, why take landscape into account? Other than the divisions come back to haunt us, as in the troubled lines drawn on Africa.

Once we had landed, I started longing for a map, a real map because I did not know where I was at all. There was only the hire-car GPS - and at one point even that stopped working – and the half-familiar names like Lincoln or Grimsby or Cambridge only confused me further.  How can one understand the land and its story when you are guided by satellite alone?

I apologise if all this sounds like bleating, but I hated being map-less. I hated the sense of not being able to find out where I was, of being unable to read the layers of history in the landscape, the architecture or in the curve of a road.

Even though we went to a Mennonite Market, drove past Sir Allan MacNab’s Dundurn Castle in Hamilton, peered through the Victorian peepholes out into the torrent of Niagara Falls and more, I felt as if there were layers of history missing, stories I could not see.

I admit I was surprised by that sense of loss. Was it just the lack of a map? Or because I had no history in my head when I could see a map?

Here, at home, I live in the triangle between York - of the castle, the walls and the Vikings - and Leeds - with its Victorian arcades and waterways - and the ancient sheep pastures of the Dales where low sunlight reveals the strip and furrow farming of older settlements.

There, in Canada, I admit I did feel the absence of those histories.

Terrific - like a blog version of 'Coast'! Loved this bird's eye view of history/geography.

Yes, good reminder of the bundle of history many of us carry around with us when we look at landscape. I guess Canadians do have the memories in their heads when they look at their own.
And history and politics are about land and resources and agricultural fertility (or not). I enjoyed this very much, Penny.
Leslie

Loved this Penny - and so important sometimes to stories - where we are and who's been here before us. All those stories just out of reach x