‘Where did the idea come from?’

Every author gets asked that, and it’s always a difficult question to answer because it’s rarely simple or straightforward.  Sometimes the seed of an idea gets planted in very early life.  It lies dormant for years and years until something else waters it and the seed starts to sprout.

I was born and raised in Gravesend, Kent,  the town where Pocahontas died and was buried in 1617.  These days there’s a shopping centre behind her statue, but when I was young she stood outlined against the cold, grey Thames with the industrial landscape of Tilbury in the distance.   There was something about that juxtaposition that wormed its way into my head. It troubled me when I was small.  If I shut my eyes now I can still clearly picture the scene. She looked so out of place – standing alone, hands outstretched.  Her image haunted me. Maybe it was the idea that Pocahontas died before she’d been able to return home.  Or maybe there was something about the river that added to the power of her image. 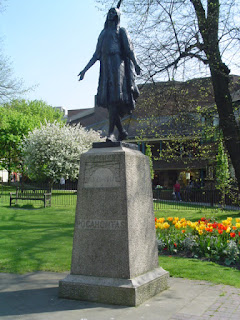 That image of Pocahontas was one of the many things that later contributed to the writing of both Apache and Buffalo Soldier.  In my next book – Hell and High Water - it’s the river behind her that was the trigger.

By the time the Thames reaches Gravesend it has grown wide and powerful.  The opening chapter of Conrad’s Heart of Darkness describes it perfectly:
“The sea-reach of the Thames stretched before us like the beginning of an interminable waterway.  In the offing the sea and sky were welded together without a joint, and in the luminous space the tanned sails of the barges drifting up with the tide seemed to stand still in red clusters of canvas sharply peaked…. A haze rested on the low shores that ran out to sea in vanishing flatness. The air was dark above Gravesend, and farther back still seemed condensed into a mournful gloom, brooding motionless over the biggest, and the greatest, town on earth.”

At Gravesend, the waters of the Thames churn and heave.  It’s moody. Bad tempered. Magnificent. Treacherous.  I can only have been about six or seven when the teenage son of one of my mother’s colleagues drowned after setting out in a homemade boat.

That tragedy underlined what I already knew in my guts: I was fascinated by the river, but the Thames was no tame stretch of water to paddle around or swim in. It was a living, breathing, mighty force that demanded respect.

I studied TS Eliot’s poetry for my A Level English. When I read The Dry Salvages I thought at first he was describing the Thames. 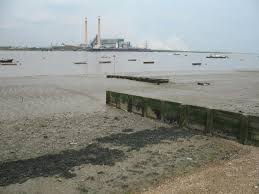 “I do not know much about gods; but I think that the river
Is a strong brown god – sullen, untamed and intractable,
Patient to some degree, at first recognised as a frontier;
Useful, untrustworthy, as a conveyor of commerce;
Then only a problem confronting the builder of bridges.
The problem once solved, the brown god is almost forgotten
By the dwellers in cities – ever, however, implacable,
Keeping his seasons, and rages, destroyer, reminder
Of what men choose to forget.”

There’s something about tidal rivers that I find compelling.  They’re moving highways. Gateways to other worlds.

We moved to Devon when the children were small,  buying a house in Bideford. It’s a small town on the river Torridge but in its heyday the port rivalled London. It was from here that many groups of settlers set out for the New World, including those from the ‘lost colony’ of Roanoke.

I suppose it’s safe to say that I have a bit of a thing about tidal rivers.
I love the way they constantly change. I love the force of the tides, the cry of the birds feeding on the mud flats at low water, the way the spring tides are so high they completely flood the marshes.

I assumed everyone felt like this until I had a conversation with my husband. He’d grown up near Bath - beside the Avon - where the river wasn’t tidal. He hated the way the Torridge could be brim full one moment and nothing more than a muddy trickle the next.

That one conversation watered the seed of an idea.  When I started work on Hell and High Water our two differing opinions found their way into the minds and hearts of the book’s two main characters.

Hell and High Water is published by Walker Books on 1st October.

Thanks for this - and for giving me Conrad and Eliot with my coffee - such lusciously crafted words! Looking forward to Hell and High Water.

Sounds fascinating! I'm very ambivalent about rivers of any kind. I love their beauty - I love to look at them - but deep water terrifies me. My dad used to have an allotment beside a canal, and there was a lock. Nothing ever happened, but there was something about that dark, deep, still water at the foot of the gates that aroused a profound fear. I wonder if Dickens had something of that feeling; he writes often about the Thames, and has some very nasty things happening at lock gates.

Looking forward to this next one....xxx

Really looking forward to October now! And I agree with you about tidal rivers.

I love that bit of the Four Quartets. And you so beautifully evoke the magic of tidal waters..

Me too, Leslie! And Tanya, my so-far-homeless magnum opus also conjures the tidal forces of the Thames. Looking forward to this new book of yours no end!

Looking forward to this. I just read Ben Aaronovitch's Rivers of London and you might fight it interesting as he personifies the various rivers and tributaries as tricky women.

I was looking of your posts on this site page and I consider this site page is truly enlightening ! Keep setting up.
phd dissertation Writing Service

I have good news for you. I finish my report about the Resume Writing Tips and you can look at it on my site.